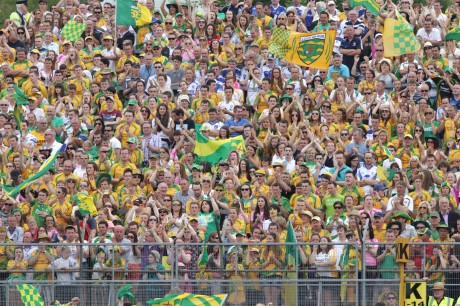 Donegal fans at the Ulster final.

UP to 20,000 Donegal fans will make their way to Croke Park for Sunday’s All-Ireland quarter-final against Mayo.

The game is a repeat of the 2012 All-Ireland final, won by Donegal and is the plum tie of the Bank Holiday weekend at GAA headquarters.

Donegal lost the Ulster final against Monaghan two weeks ago, but Jim McGuinness’s team got back on track when they defeated Laois 0-14 to 0-8 in Carrick-On-Shannon on Saturday evening.

Of the 11,125 attendance at Pairc Sean MacDiarmada, 10,000 were Donegal supporters – and the green and gold convoy is back on the road on Sunday as Sam Maguire goes on the line against a Mayo side that has knocked out the defending champions in each of the past two years.

The Donegal Co Board has sold in excess of 6,000 tickets and has estimated that between 15,000 and 20,000 Donegal supporters will make their way to Croke Park for the game.

Meanwhile, all match traffic for Croke Park is advised by the Monaghan Gardai to travel via Armagh to Dublin at the weekend and a one-way system between Emyvale and Monaghan will NOT be in place as it was for the Ulster final.