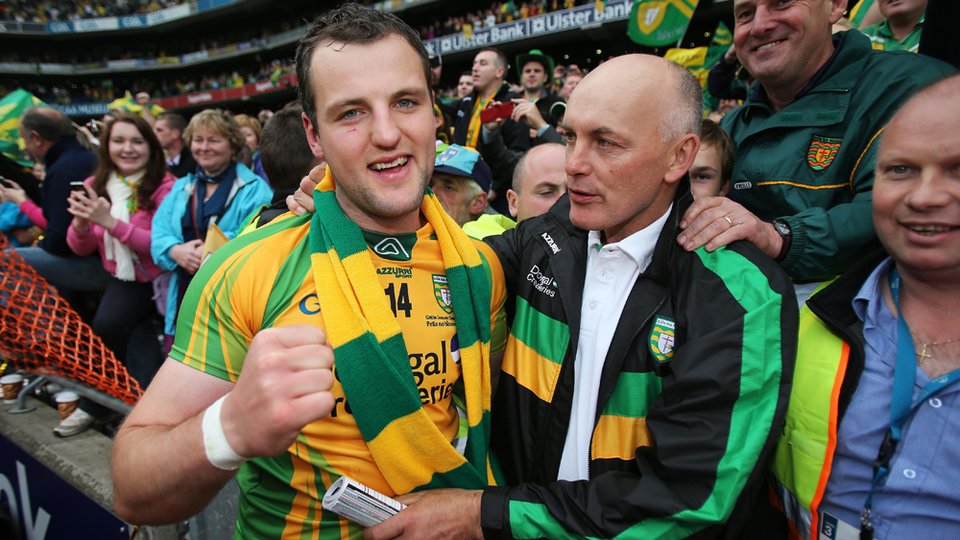 Michael Murphy is congratulated by Anthony Molloy after the All-Ireland final.

WHEN Donegal beat Cork in the 2012 All-Ireland semi-final, life was altered forever.

In the moments after the win, Jim McGuinness sought to dampen the hype in his dressing room and it was to a Donegal icon they turned.

Shortly after the final whistle sounded, a familiar face popped down the tunnel of the Hogan Stand.

Anthony Molloy had been the only previous Donegal captain to walk the fabled walk up the Hogan Stand to accept Sam Maguire. Twenty years on, Michael Murphy listened intently as Molloy drove home a powerful message.

“‘Seize the opportunity’ was pretty much the message he gave us,” says Murphy, the 24-year old skipper who will lead a Donegal side out in a final for the seventh time on Sunday.

“We’re still trying to live by those words now; in every game we play we’re living in the present, trying to grab the chance.

“Molloy didn’t beat around the bush when he came in.

“He warned us that there was no point in us living with the false hope that it would all be quiet, but that we needed to be ourselves.

“His big message was about seizing the opportunity and how they thought after ’92 that they’d win more. Powerful stuff.”

Molloy was a hero of the young Murphy, an avid Donegal fan who went the length and breath of Ireland with his parents, Mick and Mary, in pursuit of Tir Chonaill teams.

One day in the early 90s, the Murphys were driving past the old Croke Park and Michael hankered for a venture inside the great cathedral.

Mick had a word with a security guard and in they went. The great Mícheál Ó Muircheartaigh met the Murphys and asked of the child: ‘Do you know the big man – Anthony Molloy?’

A grin crossed Michael Murphy’s face: ‘I do – he’s the captain of Donegal’ he told an inquisitor. Little did either Ó Muircheartaigh or Murphy realise then, but their paths would cross again in the same ground many times a couple of decades on.

Appointing Murphy, then just 20, as his captain at he outset of the 2011 season, was not a gamble by Jim McGuinness. Eyebrows were raised. The captaincy had been a heavy burden on some of Donegal’s fiercest generals down the years.

“When Jim gave me that call, it was certainly something I didn’t take lightly,” he says.

“I was so excited to get my teeth into it. It’s a great privilege to go anywhere as the captain of Donegal.

“It is nothing to take lightly. When you put on that jersey, when you wear that crest, you have to remind yourself that you’re performing and delivering for the people of Donegal.

“We remind ourselves of that all the time, before every game.”

Of the present panel, Neil Gallagher and Rory Kavanagh have been captains in the past, but Murphy feels powerful vibes from all corners of the squad.

He says: “The captaincy is a basic role in terms of doing extra work.

“There are so many leaders there: Rory Kavanagh, big Neil, the McGees, Karl Lacey…so many men who’ll stand up in the heat of the battle.

“I always got great encouragement and advice from John Joe Doherty when he was the manager.

“The likes of Tony Boyle, too, past players like himself and Molloy. When these boys offer you advice, it’s better to take heed.”

“It’d have to be Clones in ’98 and Joe Brolly blowing his kisses,” Murphy remembers.

“I remember exactly where I was sitting in the Gerry Arthurs Stand, watching out and seeing Geoffrey McGonagle’s infamous dunt on Noel McGinley and all the dreams went.

“That game showed, and it’s still true now, that you just have to keep going for the whole 70 minutes.”

He’ll be 24 at the beginning of August and has just qualified as a teacher, having spent four years studying PE and Biology in DCU.

The Bomany boy is weighing up his options and is considering a Masters. “I’m still in education mode, so I think I might stick at it,” he says.

In the approach to the Tyrone game in May, Murphy did a twelve-week placement at St Mark’s in Tallaght. It was bliss.

“It was perfect, really, because they weren’t into Gaelic football,” he says.

“They’d have recognised the Donegal accent as being a bit strange mind you!

“It was a brilliant school with a great soccer and athletics ethos.”

Upon his return, he got involved, along with Donegal team-mates Eamon McGee, Patrick McBrearty, Michael Boyle and Leo McLoone, in running a Gaelic football camp for 13-15 year olds.

He was grateful for the assistance of the county board, who laid on a bus for the Pale-based players in the run-up to the Tyrone match.

“Some boys were doing exams, others had a thesis to do, maybe some work to catch up, so it was good to get maybe three to six hours of catch-up on the bus.”

It was just another pointer to the professionalism of this reign, where the players really are number 1.

These are players now in search of a third Ulster medal, a piece of silver that was perennially elusive for some of them.

Murphy made his Championship debut in 2007, in a qualifier. He didn’t win a game in Ulster until Jim McGuinness came along.

“It’s sort of crazy in a way, where we are and where we’ve come from,” he says.

“The mentality and the mindset is totally changed.

“We got the first Ulster so early and things have just moved on and built from there.

“We’ve kept the same ethos, the same motto – we’ve stuck by that and it has served us well.

“It’s about driving forward and improving all the time. We’ll have plenty of time, in years to come, to live in the past.

“All we can do is try and improve. That’s the environment that has been created here now.

“The off-field stuff – the strength and conditioning, the physios, whatever – have all been designed to help us, the players.

“The training, too, is top notch. You couldn’t not improve playing against the likes of Eamon and Neil McGee. The two of them are in such good form and they are so focussed on the job.

“Coming up against them has taken my game on.”

Murphy is working hard at his own game, not wishing to let the progress stagnate.

He’s been working on improving his left-hand side, interestingly both his hand and foot.

“We’re nowhere near the perfect article and we have massive facets of our game to improve on.

“It’s important, both for balance and with the game is being analysed now, to develop both hands and both feet.

“I’m working hard on my left, but I still have to keep working on improving the right one too.

“You have to be flexible. You’ve always got to improve, be it on you left foot, in your tackling or whatever.

“The opportunities may not come all the time.”

Donegal head for Clones with history in their sights.

A three-in-a-row could be theirs on Sunday evening.

“The ideal way to go to Croke Park is as the provincial champions,” Murphy says.

“Teams beaten in finals generally have a poor record in lifting themselves. The way we want to go is through the front door.

“Monaghan will carry no fears of Donegal, though. Every team in Ulster fancies their chances and Monaghan will see this as a massive opportunity.

“We can’t get caught up in the whole three-in-a-row thing. We just need to focus on getting a performance that will get the right result.

“It’s about whoever is willing to seize it.”