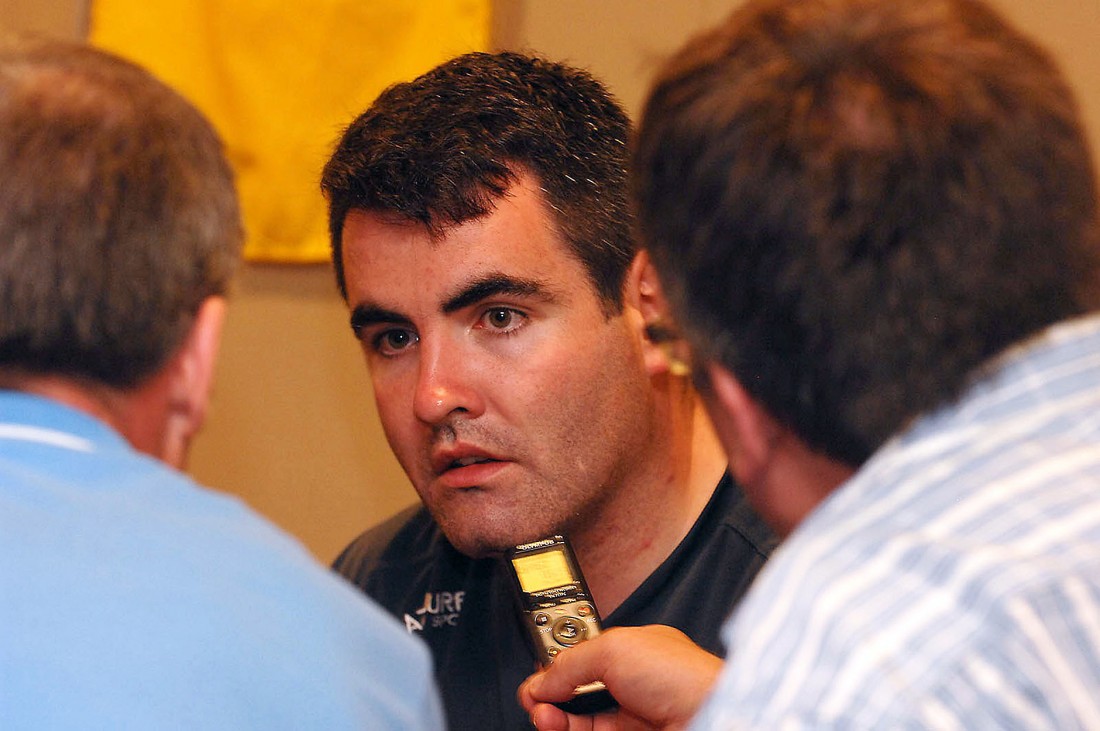 Donegal goalkeeper, Paul Durcan, at the press night before the Ulster Final.

THEY say that goals win games, so a glance at the clean sheet record of Donegal ‘keeper Paul Durcan shows how important the Four Masters man has been to Donegal’s championship run this year.

Durcan hasn’t conceded a goal against either Tyrone or Down but the ‘keeper insists much of that credit must go to the defenders.

“It is a huge thing to keep clean sheets and as a ‘keeper I’m always delighted with that but credit has to go the full-backs as well because they have been exceptional. They work exceptionally well together and they work hard in training and in games so we are very lucky with that.”

The Four Masters man agrees that the high-intensity game Donegal plays means there is help further out the field too.

“Being able to break the ball down around the middle, putting pressure on the kickers sending the ball in, that definitely helps the full-back line. It is something you are told as an underage player, putting the pressure up the pitch is a huge advantage, it is something our lads are good at out there.”

Not only does he believe the Donegal players must be able to apply pressure, they must also be able to deal with pressure situations and the county’s number one says the strength in depth in the squad has been a big plus this year.

“We were very lucky last year with the injuries but even last year in the Ulster final Declan Walsh came in and did a job, he did it again against Down. When you have players like that who are well able to handle themselves on the big stage it is no harm to play them as well.”

One man who hasn’t be able to force his way into the starting line-up though is Durcan’s deputy Michael Boyle, a ‘keeper who would likely make the starting side in many county teams.

Durcan is under no illusions about the qualities of the Termon man, insisting that his presence in the squad keeps him very much on his toes.

“In fairness we know Boyler is as good a ‘keeper as there is. He was won Sigersons with DCU and he is well able to hold himself in training. We have Pat there running us around, he keeps us on our toes. We enjoy training together and we have a good relationship the three of us we get a lot done. It is great to have that pushing you along and it does keep me on my toes for sure.”

The entire team, he suggests, will need to be on their toes against Monaghan although he admits that he hadn’t fancied Monaghan to come through their side of the draw – mostly because he hadn’t really looked at it!

“To be honest I wasn’t looking at their side of the draw too much, we had a big enough task ahead for ourselves against Tyrone to start with. After that it was just the Down game. It might sound like a cliché but we train and look at one game ahead. That game now happens to be the Ulster final and it’s a good team in Monaghan that we are coming up against.”

It’s been a while since the teams have met, but Monaghan certainly have had the upper hand in the most recent encounters.

“Some people are saying that Monaghan are a bogey team, it’s not that they are a bogey team, they just a good team. The days they did beat us they beat us convincingly. They are coming off the back of a good league and good victories in the championship. They are on the crest of a wave and are playing very well.”

The Four Masters ‘keeper watched the Ulster County in their league final and was impressed.

“It’s been a while since we played Monaghan but I saw them in the league final and they were exceptional that day, their running game was very strong. It will be a new challenge for us, hopefully we can get the performance that we need.”

Durcan played with Monaghan’s Paul Finlay in Sligo, says he can put the ball over from anywhere, and points to him as just one of the danger men in the opposing ranks.

He also expects a fiery start to the final with no quarter asked, or given.

Monaghan will of course have home advantage but the Donegal ‘keeper says the Donegal lads have no issue with that fact.

“I think we have a bit of experience of finals now but I don’t think that’ll make a difference if it’s a sunny day in Clones and they have a big crowd behind them. It will be hectic at the start and anything could happen and that’s going to be the challenge we have to step up to.

“We wouldn’t have any issue with the fact that the game is in Clones, it is where Ulster finals are held and we love playing there. It’s not that far from Donegal, it’s a good place an exceptional pitch and it is a joy to play there on an Ulster Final day in front of 30,000 people.”