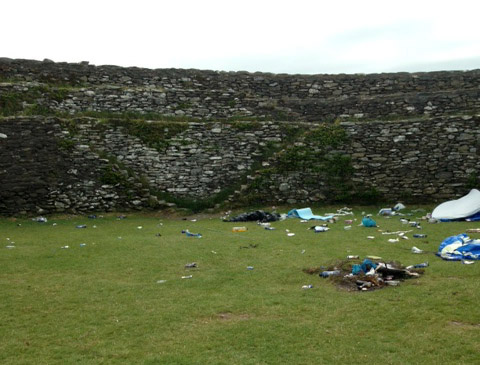 Debris left behind in the Grianan of Aileach ring fort.

TWO men who pleaded guilty to the criminal damage of one of the oldest ring forts in the country have been remanded in custody.

Judge Paul Kelly heard at this mornings Milford District Court at Letterkenny Courthouse that Raymond McCormick, a 21-year-old business student, and unemployed carpet fitter William Sweeney (19), both with addresses in Creggan, Derry, were part of a group of over 40 who camped at the 3,000 year old An Grianan Fort in Burt on Friday night.

Garda Eddie Doherty told the court when tourists from all over the world arrived at the popular attraction they witnessed an appalling site. He said they were the tourists, from as far away as America and China, were traumatised seeing how the fort had been desecrated.

The garda said a large number of persons had come from Derry and set up camp in the fort on Friday night and displayed what he described as ‘unruly’ behaviour.
Stone walls had been defaced; inside the fort was a display of empty and broken beer bottles, and even women’s underwear were lying everywhere, while someone had even defecated at the entrance. Garda Doherty said someone had even defecated into the nearby holy well.

The court heard that the two defendants had been seen by tourists throwing empty beer cans and removing stones from the fort wall and ‘hurling’ them 20 feet down close to the entrance. Garda Doherty said some of the tourists were in tears witnessing what was happening.

An American tourist and a man from Mullingar identified the two defendants to them. The court heard the two even posed for a photograph for an American tourist before harassing her and other tourists present, including a Chinese family.

They were arrested at 12.10pm and conveyed to Buncrana Garda Station where they were charged and subsequently remanded in custody to appear before Monday’s sitting of the district court.

Solicitor, Mr Patsy Gallagher said his clients were embarrassed and remorseful but adamant they had only thrown the stones and were not involved in the other desecration. He said they were ‘two of many’ and extremely intoxicated, but weren’t using it as an excuse for the ‘despicable antics’. Mr Gallagher said word got out on the camping trip and things got out of hand.
Garda Doherty added that the two defendants were co-operative while in custody and had ‘seen the error in their ways’.

Judge Kelly said he had visited the fort, one of the best preserved in the country, which has stood for 3,000 years despite the assault of numerous invasions and wars only to be desecrated ‘thugs and louts’ who dismantled it from the inside. ‘Few words can describe the abhorrence of this loutish and thuggish behaviour,” the judge said.

He asked for the office of public works to determine how much damage has been caused and remanded the defendants to Thursday’s sitting in Buncrana.