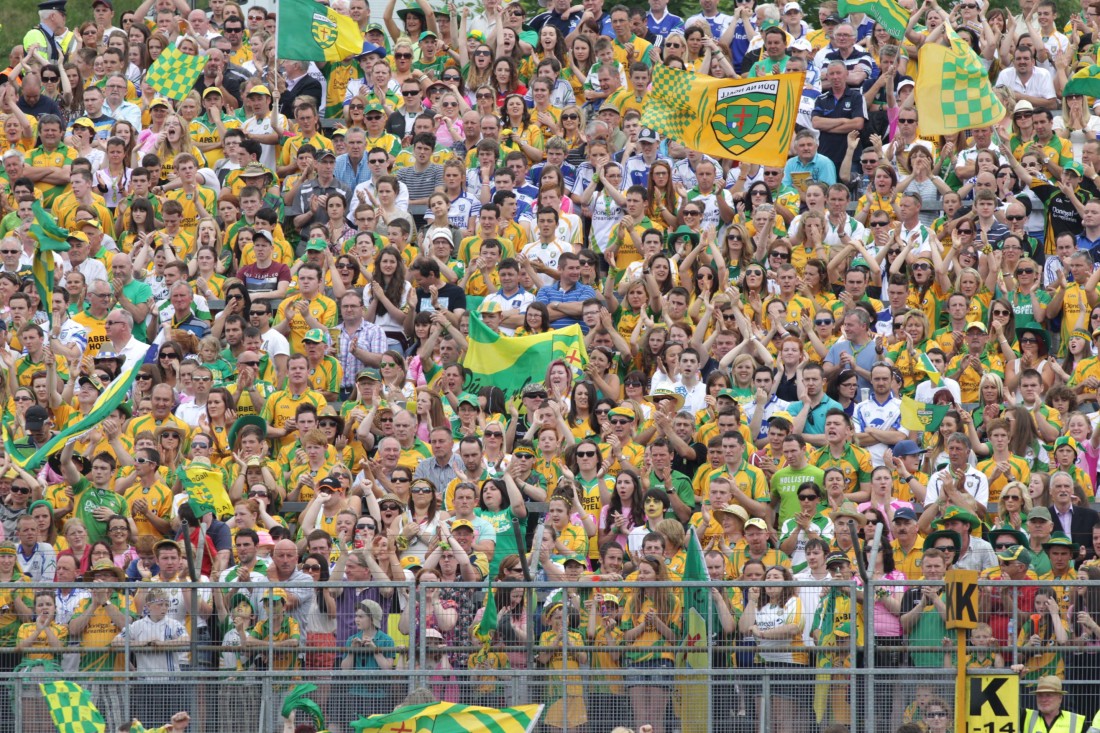 Donegal fans who turned out in huge numbers to the Ulster final in Clones.

THOUSANDS of Gaelic football fans in Donegal have been left ‘disillusioned’ at the GAA’s decision to stage Donegal’s All-Ireland football qualifier against Laois at the compact Pairc Sean MacDiarmada in Carrick-on-Shannon on Saturday.

Pairc Sean MacDiarmada’s official capacity is a tiny 9,331, but this figure was increased to ‘just over 11,000’ on Wednesday.

Just 5,000 tickets had been allocated to Donegal’s clubs while a further 500 terrace tickets were given to Donegal on Wednesday evening.

“If we had got 10,000 tickets on Monday, we could have sold them no bother,” said the Donegal Co Secretary Aodh Máirtín Ó Fearraigh.

“People had nearly resigned themselves to not being able to get a ticket. We are disappointed that the game wasn’t put into a bigger venue that could have accomodated all of our supporters.

“We wouldn’t mind having to travel extra miles if all of our supporters were able to get in to see the game.”

Donegal GAA chiefs have conveyed their disappointment at the decision to stage the game in Carrick-on-Shannon to Croke Park officials, with the GAA’s Director General, Paraic Duffy, learning of the grievance when he was in Glenswilly on Tuesday for the launch of the All-Ireland series.

Donegal officials had suggested St Tiernach’s Park in Clones as a possible venue, while Roscommon’s Dr Hyde Park had also been mooted as a possibility.

Dr Hyde Park holds around 18,000 and would have been able to accomodate those wishing to attend. The decision to take the game to the Leitrim was made without consultation with Donegal officials, it is believed.

Laois are expected to take up on 2,000 fans to a game that sees them up against the reigning All-Ireland champions, Donegal, who lost Sunday’s Ulster final to Monaghan.

The game is not being televised and club secretaries and county board officials – especially the county administration manager Noreen Doherty – have been placed under considerable strain such has been the volume of requests.

Despite reports to the contrary, the capacity of Pairc Sean MacDiarmada is not up to 15,000, but officials have told the Donegal News  that ‘just over 11,000’ could now be accomodated at the venue.

Upwards on 9,000 Donegal supporters are still expected to be in Pairc Sean MacDiarmada for a do-or-die game for Jim McGuinness’s team. The prize is an All-Ireland quarter-final berth – and assistant manager Rory Gallagher has called on supporters to back the team to deliver the goods.

“We feel that we’re in it together,” Gallagher said.

“It has been very united this last couple of. We’ve given supporters a lot of good days and are extremely disappointed not to have given them another one. Getting to an All-Ireland quarter-final is a common goal everyone in Donegal has now.”