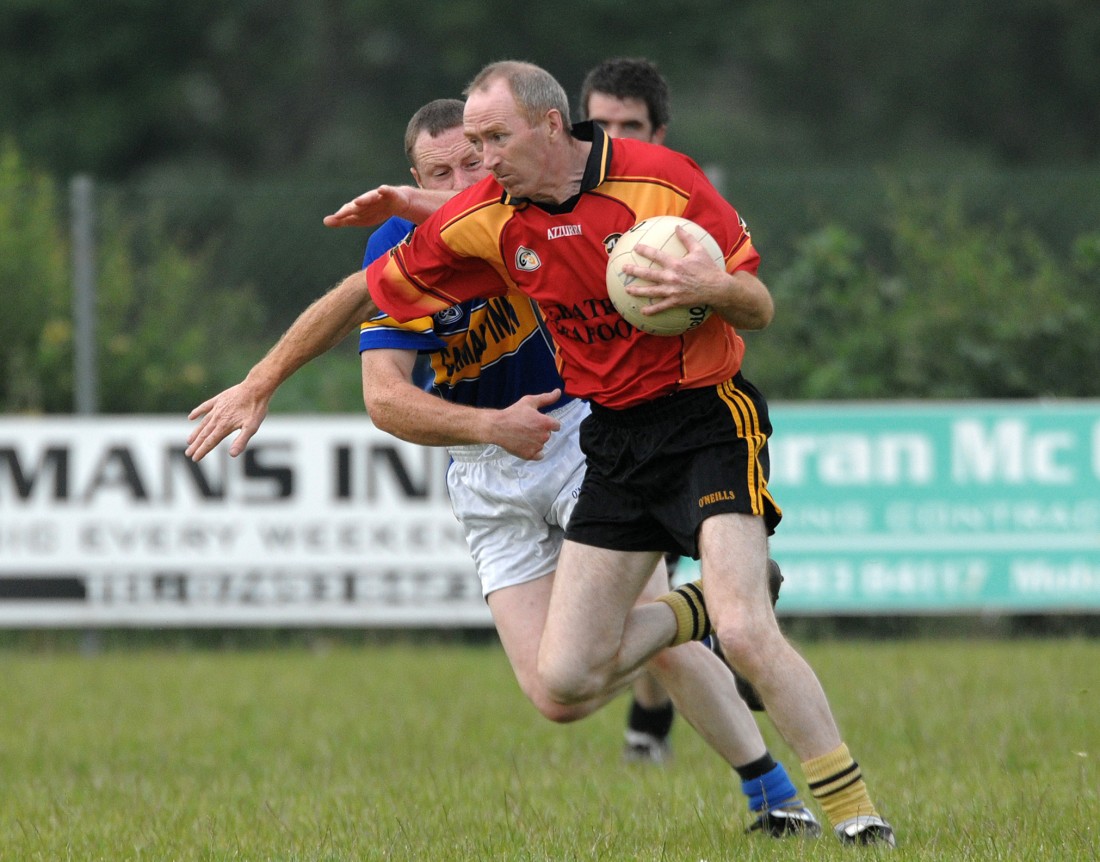 WHEN Naomh Ultan won the Junior B Championship in 2011, the veteran of the team spoke to the press and indicated that he’d leave on a high. He’d had his day and, at 50, it was a fitting gracenote.

“I can retire now. It’s a good way to finish off with a medal,” said a player who had just been named Man of the Match. It was the perfect way to round it off.

Martin Shovlin is 52 now – he’ll turn 53 in December –  but on he toils on the Junior B pitches of Donegal with all the zest he’d had in his youth.

Since he started off in the black and amber at underage level, Shovlin cannot recall a season where he hadn’t played for some Naomh Ultan team or the other.

Last weekend’s 1-9 to 0-4 win over Glenfin gives Naomh Ultan the edge as they welcome them back to Dunkineely for Sunday’s second leg. Pairc Naomh Ultan has a splendid new clubhouse now, but the one constant in the club has been Shovlin, still hammering away – at midfield!

“It’s more going through the motions than ‘playing’,” laughs the affable Shovlin, one of the most loved Donegal footballers of all-time.

“The way it pans out in this club, I’ve said manys the year that I was retiring. You always find men coming and saying they’re stuck for numbers and followed by: ‘Will you come out and play a game?’

“A game suddenly becomes a few and you’re stuck at it again. That’s going on this ten years!

“Whenever they’re not stuck, I might get rid of the boots…”

The familiar call came this year. Martin ‘Yogi’ Meehan picked up the phone and gave Shovlin that now familiar beckon. Of course, he answered. Always has.

“It doesn’t bother me in the least to go out and do a bit of training. Once you’re enjoying it, sure it’s half the battle.

“I’ve never been without the football. I’m in good shape with no injuries – nothing serious anyway – thank God.”

The morning of the All-Ireland final in 1992, Shovlin was taken by manager Brian McEniff, selectors Seamus Bonner and Mickey Lafferty and Dr Austin O’Kennedy for a fitness test. He’d hurt his neck in training on the Thursday night, but four hours before the game a tearful Shov’ put the hands up and made a call. He was out of the final.

Ten years beforehand, a freak fall at work resulted in an ankle injury that prevented him from making the Under 21 team that won the All-Ireland.

“I still have regrets, surely, but you can’t wind the clock back. It was a cruel blow, a bitter disappointment, I just felt serious down about it at the time.”

He played on until 1997 before calling time with Donegal. Fast forward 16 years and he’s still as integral as ever to Naomh Ultan.

“I’m playing midfield now – sure that shows how bad it is,” he smiles.

In 2010, he was Man of the Match against Downings in a quarter-final and again against Naomh Colmcille in the semi-final, but Naomh Ultan lost by a point, 2-10 to 2-9, to MacCumhaills in the final. The following year, Naomh Ultan made it back to the Junior B final and faced St Eunan’s.

Shovlin rolled back the years. He clipped over the opening point of the game and played an integral win on a landmark day that saw Alan Lyons and Sean Furey net the goals in a 2-7 to 1-7 win. Named at corner forward, Shovlin foraged around the middle of the park with all those never-say-die traits that made him a fans’ favourite during his time in the green and gold of Donegal.

Times have changed, both on and off the field.

“Young fellas nowadays don’t want to put the same effort in – they don’t really have the same commitment,” he says.

“Even bucks my age, sure we shouldn’t be competing with lads at 20 or 21 years of age. We can compete with them though.

“The game has gone down a wild scientific route now too. All the different things in training to do with diet and you have every man on programme during the winter time too.”

The boys of his vintage would have baulked at the suggestion: “Jesus, we tried the gym one year and were glad to see the back of it. I hated it. It’d be a stretch to say we even tried it one year…Not the bit of harm did it do us. Most of us are still in good enough nick yet.”

Things are tough in Dunkineely. Like many villages of its size, it has become rife with having to bid farewell. Shovlin has seen more young team-mates emigrate than he cares to recall. “We used to rely on Killybegs for work, but sure that’s only three months of the year,” he says.

“There nothing much down here and no industry at all. Numbers down this end of the county are low and it’s hard to keep a wee club going, but we’re still putting out two teams every week.”

When you’ve men like Martin Shovlin still slinging the boots over the shoulder it makes life a little easier. “Ah, I just take it week by week at my age,” he says.

BONNER SET FOR COMEBACK TOO

MARTIN Shovlin isn’t the only one of Donegal’s heroes from 1992 still playing.

Declan Bonner is set to make his latest comeback on Sunday when Na Rossa head for Pearse Memorial Park for a Junior B Championship clash with Ardara. Bonner hasn’t played since last season, but will make his return as the team’s goalkeeper, a position he has played for the last couple of seasons.

“I played the last couple of years alright and I’m ready for another comeback,” said Bonner.

“We’re like any other small club, we’ve got a low numbers base so you just have to do your bit at times.”

One of Bonner’s  partners in crime from the front division in ‘92, Manus Boyle, is still racking up the scores for the Killybegs reserves – and has been known to appear for the seniors, too, at Fintra.

With Na Rossa and Naomh Ultan still in the Junior Bs, Bonner and Shovlin would love a rematch to rekindle some old sparks.

“I’m sure Bonner has put on a few stone since I last seen him – but it’d be good to get playing on the same pitch again,” said Shovlin.

Bonner wouldn’t mind, either. “It’d have to be in the final, though,” he added. 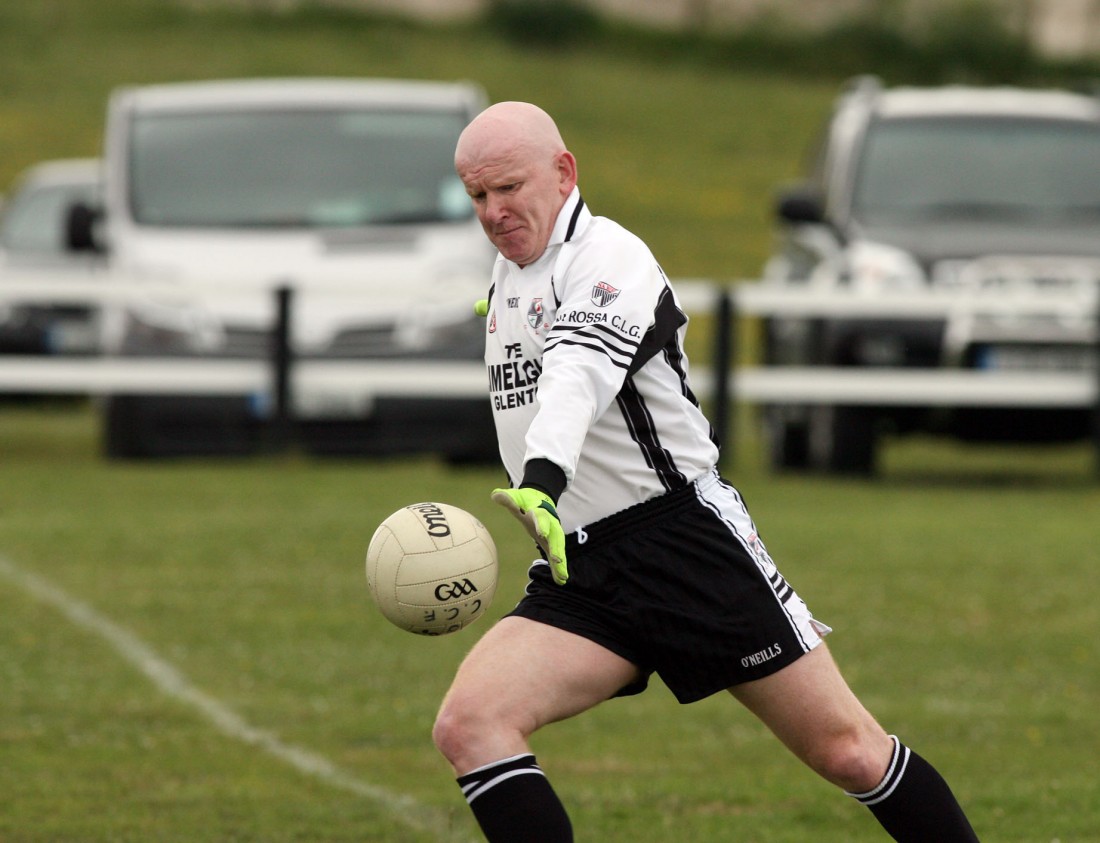