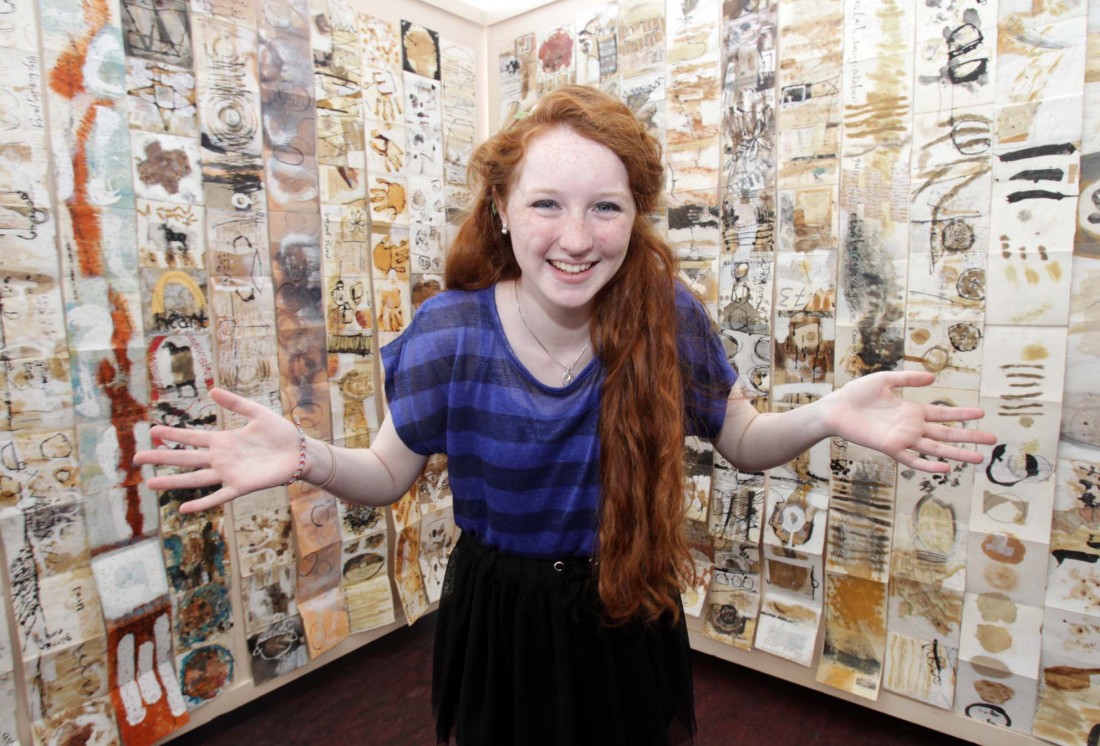 ALL the world’s a stage for Katie…There are times young Katie Porter feels like she spends all her time on stage – and she doesn’t think that’s a bad thing! The 17-year-old Raphoe girl who feels at home in An Grianán Theatre, Letterkenny, jets off this weekend for an adventure of a lifetime spending a week on Broadway with some of the biggest names in musical theatre. She spoke to the Donegal News about her love for music and the stage and her up coming trip to New York.

When she was about seven years old Katie Porter took her first steps onto the stage of An Grianán Theatre as part of the Ballet Ireland Summer School.
“I remember doing the Ballet Ireland Summer School twice, I think I was a giant playing card and an Oyster in the shows, it was such fun I just loved being up there on stage and I wanted to get back again as soon as I could,” she said this week.
Ten years on – following a successful audition for a place – the Raphoe girl is set to become the first person from Ireland to take part in the Broadway Triple Threat Summer School run by Catherine Cox, a Tony-Award nominated Broadway veteran.

“Last year we had international participants from Portugal, Egypt and Canada.  This year we have a major surge of interest from Italy, but as for Ireland I believe Katie will be the first,” Catherine said.

The week-long summer school concentrates on singing, dancing and acting (hence the triple threat) and this year’s guest artists include Billy Porter, who won the Tony Award for Best Actor for his role in Kinky Boots, actress Laura Osnes currently playing Cinderella on Broadway and the Tony Award winning Director/Choreographer of Kinky Boots, Jerry Mitchell.

“I am just buzzing to be able to get the chance to work with such amazing people, it really is the chance of a lifetime,” Katie said.
Indeed she admits that she follows the fortunes of the shows on Broadway in the same way as a lad of her age might follow the Premiership.

“Just to be able to say that I’ve been to Broadway and worked with some of these amazing people will be a truly magnificent milestone for me.”
But, she adds, she has been fortunate already to have met brilliant people in Donegal who continued to whet her appetite for the stage.

“We have so many fantastic people working in the music and acting scene in Donegal that I’m not even sure if people in the county really appreciate the depth of talent that is here. I have been lucky to have been encouraged and assisted by so many of the people from Letterkenny Musical Society, Dynamic Waves, Letterkenny Music and Drama Group and North West Opera and I realise that in many respects I have been fortunate already to work with some amazing people. Sometimes I feel like I spend all my time in An Grianán for shows but I am always learning and, to tell the truth, I love it.”

Her first role in An Grianán came as the young Nora Ryan in the Letterkenny Music and Drama Group’s production of Children of the Dead End, one that she had to show some steely determination to land.
“I was only ten but I overheard the director saying I would be perfect for the role, but he was concerned I was much smaller than Conor (Brennan) who was playing the young Dermod Flynn. I asked my mother to put my hair up in a bun (and I have a lot of hair) and wore high boots to the next audition. I got the part and I really loved that show.”

Since then Katie has appeared in Annie, Oliver and Calamity Jane with Letterkenny Musical Society, Sing Stars with Dynamic Waves as well as in productions of Mamma Mia and Grease at her school, Deele College in Raphoe.

She attended Youth Theatre in An Grianán, appearing on stage last Saturday in their showcase production and all this week she was delighted to be able to help out at the Sparkles Musical Theatre for Younger Children in the theatre.
Away from the stage, the talented youngster who won the overall best actress award with her school in the County Donegal Secondary Schools Drama Festival, loves to write and perform her own music as well.

“I got to perform at the Crash Cabaret this year and then I had the absolute pleasure of playing on top of a castle at Oakfield Park for the guests who attended the 24-hour train event for Relay for Life. If I’m not on stage then there’s nothing I love more than getting my guitar out for a while to sing.”

Due to take her Leaving Certificate exams next summer, Katie says she’d love to pursue a course than would allow her continue her love affair with music and theatre.
“That’s the plan anyway, but it’s a bit down the road yet,” she said.