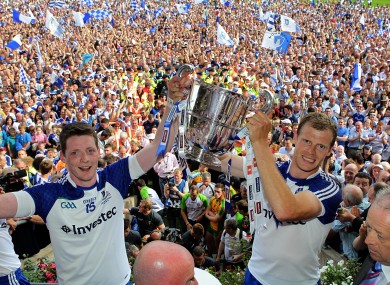 MONAGHAN turned the tables on Donegal after a meticulous three weeks of plotting before Sunday’s Ulster final.

It was no fluke.

Theirs was a plan that their players were, literally, walked through on the training field at Cloghan.

It’s a vast, open facility, situated along the main Monaghan-Dublin road, just off the N2 Castleblayney by-pass, but it’s well enough out of the way of prying eyes.

Richie Forde, Monaghan’s stats man, studied Donegal and, from there, the blueprint to glory was devised.

“We done a lot of walk-throughs down in Cloghan and I suppose we got a couple of stats on who was doing the main scoring for Donegal, how they were getting their scores from,” Monaghan captain Owen Lennon said.

Donegal’s full-forward line was kept scoreless from play. None of the six starting forrwards managed a score from play. Only Ryan McHugh, a half-time sub, popped over from play, and he hadn’t lined out as a conventional attacker.

“We studied Donegal over the last couple of weeks and what possible formations they had and what way they might fall into on Sunday,” Lennon said.

“To try and beat Donegal of course you are going to have to try and look at Michael Murphy, Colm McFadden as well as Frank McGlynn and all those boys coming forward and doing the damage.

“Thankfully the lads that were sent out to do the jobs on Sunday went out and done them.

“Cloghan is at a place where it couldn’t be any more open. It’s on a main road and the doors are always lying wide open.

We trained hard, some nights we trained for two hours and there were no real secrets there, it was just hard work. Yes, of course we decided how we were going to nullify these great players.

“You do have to sit down and study them but that’s all part of your backroom staff; your stats man, your video man doing all of that stuff, picking out a few clips of how they play and stuff like that.

“A combination of all of that went into the win on Sunday.”

Donegal were rattled from as early as the seventh minute, by which time Monaghan had raced into a four-point lead.

It left them with a mountain to climb – and Donegal couldn’t reach the ascent with the Farney men retaining composure and control.

Monaghan’s tenacity and determination to bridge a 25-year gap to their last winning of Ulster was shown by the 21 turnovers they forced.

Lennon said: “There was serious intensity there on Sunday. We just tried to target every single ball, every single break and some of the boys… I suppose the initial hit of Stephen Gollogly on Mark McHugh… It was a fair hit but it showed the intent right from the off.

“We certainly were motivated. It was our third final and we had been looking at the various captains lifting the cup in front if us and it is not a nice feeling. Walking off the pitch with your head down, we said, ‘Jesus, wouldn’t it be great if we could take our chance.’

“Then it was maybe the last Ulster final in Clones and it would have been great for Monaghan to be on the cup for that year, thankfully we are.

“The biggest thing was to target the first ten, fifteen minutes and not let Donegal get ahead. As the match went on we were thinking, right, we need to get further ahead because Donegal are going to come back.

“We were playing a Donegal style against them and everything fell into place.”

The draw last October had given Monaghan the ‘easier’ side of the draw. They could target a final, realistically. From the outset of 2013, Monaghan have meant business. They lost a McKenna Cup final to Tyrone, but defeated Meath in the Division 3 League final at Croke Park. Sunday’s was their third final of a year that had seen them gain momentum all the way, much like Donegal had in 2013.

Lennon said: “We went out to win every match this year. We only lost three matches out of our 17 this year, we hadn’t lost one in Clones. It was wee records like that behind the scenes that we weren’t going to mention.

“We kicked on from the McKenna Cup and took it league match by league match. We had a couple of knockbacks with the Cavan game and that but as it turned out, it got us ready for Cavan in the semi-final. It was a good build-on from match to match.

“In fairness to the boys they worked really hard. I know every team is working really hard but this year there was a different sense to it. We were in the gym and there was a vision, it was no great secret that there was a possibility of getting to an Ulster final looking at the draw from the very start and we knew that of we could get there, we never knew what might happen.”