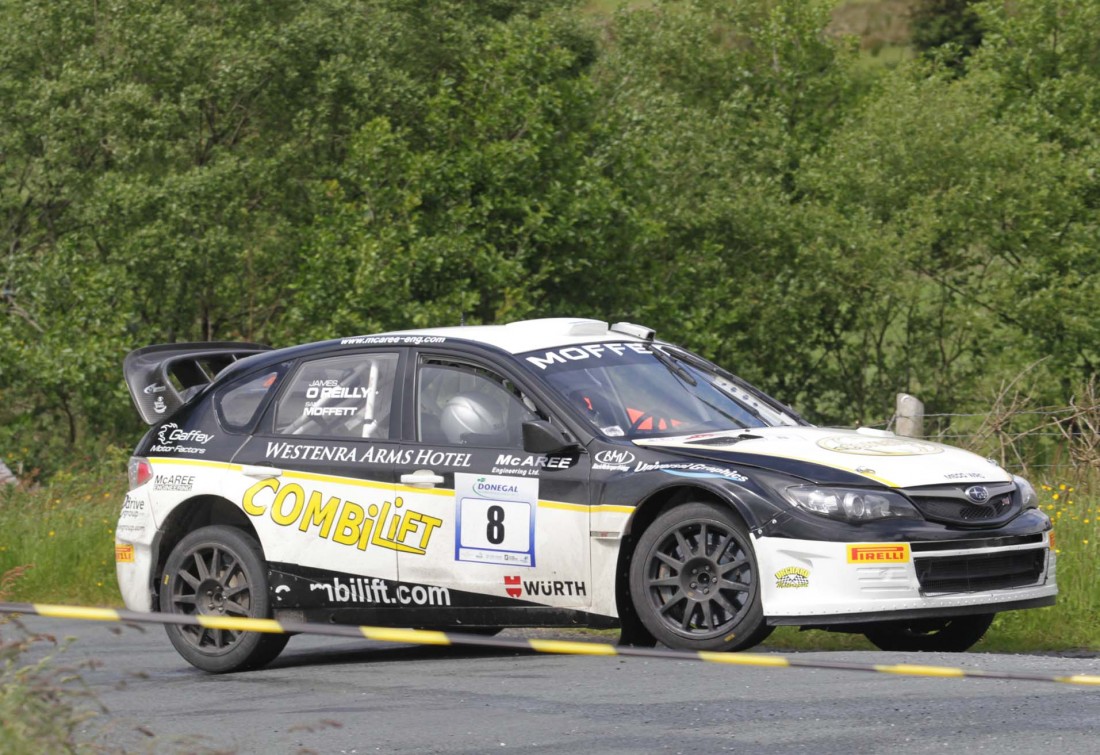 Sam Moffett and James O’Reilly on the Gartan stage.

BY LIAM PORTER
DONEGAL International Rally winner Sam Moffett said it would take some time for it to sink in with him that he had actually clinched the prestigious title.
The Monaghan man went to bed on Saturday night in second place but woke to find himself in first on Sunday morning after penalties had been awarded to leader Garry Jennings.

“To be honest I couldn’t even sleep at the thought of being in second place so to wake up and find myself in first after penalties or whatever was a big surprise.”
Such a surprise indeed that Moffett said he didn’t really handle the pressure that well on Sunday.

“I was very jittery after I’d heard that, I couldn’t eat and the concentration was gone, but fair play to James (O’Reilly) he did a great job to get my focus back again.”

Moffett and his co-driver O’Reilly kept their cool on Sunday to ensure the victory, amazingly his second win in only his second ever drive in a WRC car.
But then the young driver who was awarded the Billy Coleman young rally driver of the year award in 2011 has a real pedigree in the sport.

“At the top of my head there must be seven or eight of us Moffetts all rallying. My uncles are rallying, even my mother did this rally in Donegal in 1986,” the new Donegal champion said.

Having grown up steeped in the sport he also was aware of the reputation of the Donegal rally and was under no illusions about what he had just achieved.
“It is absolutely great to have my name on that trophy and I’m so glad that I have had the opportunity to take part because this is the best rally in the country. In fact in some ways I’m wondering after winning it – what do I do next?”
Moffett was doubly pleased that alongside his co-pilot James O’Reilly, they had become the youngest crew ever to take the coveted prize. It wasn’t something that was lost on the notes man either.

“I used to come to Downings when I was a youngster at a time when Billy Coleman and Austin McHale were rallying here. They were real heroes of mine, legends in Irish rallying. I used to stand on Atlantic Drive and watch these real monsters of cars fly by, to think I’ve won it now is just fantastic,” O’Reilly said.

And when he looked at the company they now find themselves, people like former World Champion Sebastian Loeb, O’Reilly said it was “unreal” to have won Donegal.
He acknowledged that the car had played a huge part – “I just can’t lift my head any more, you are feeling the corners rather than looking at them,” but that he hadn’t allowed himself to get carried away until he was certain of the victory.

“For me I can never switch off until it’s signed and sealed, I am still wary until everything is final.”
But of course everything was signed and sealed and as Donegal International Rally champions Moffett and O’Reilly said they would take some time to savour the moment before heading to their next event.

“I’ll still be buzzing about this for a good while and hopefully we can get all the sponsorship and everything in place again for next year so we can be back to give the boys a good race again,” Sam concluded. 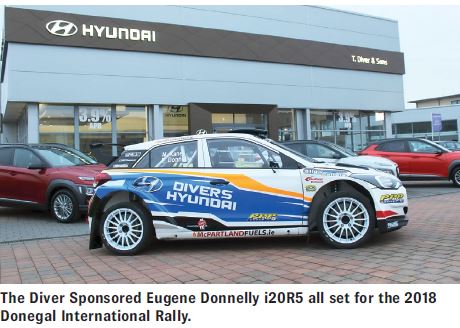