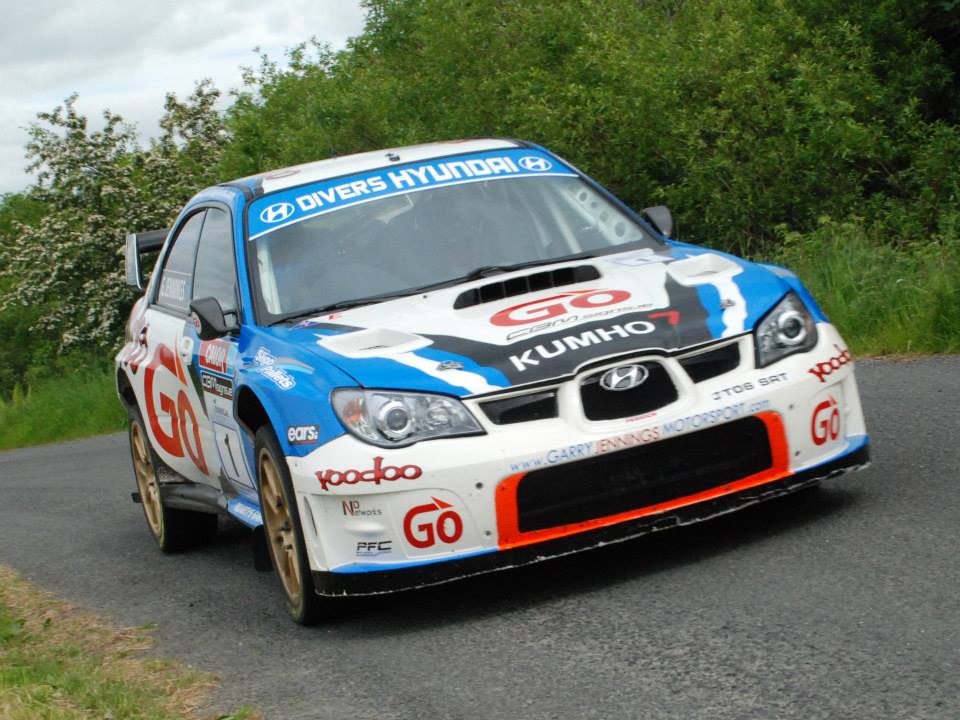 Garry Jennings and Neil Doherty are in control.

BY CHRIS MCNULTY
at the 2013 Donegal International Rally

GARRY Jennings is well in control of the chasing pack after a dramatic day two at the 2013 Donegal International Rally.

Defending champion Jennings had been locked in a titanic battle with Darren Gass all day and the Monaghan man had Jennings to the pin of his collar – only for the Armagh man to go off on the penultimate stage of the day, the first race around Grovehall.

Gass and Enda Sherry were making a real battle of things, but he went off the road in Grovehall and the event, for him, was over.

At one point, Gass had reduced the margin to just 5.6 seconds, but the Tarmac Champion’s Donegal Rally is at a close after he spun off.

That loop of Grovehall proved to be a defining stage.

Coming off the previous stage, SS12 at Gartan, Jennings told the waiting pack: ‘I think the lead is gone’. Prior to that, Gass had reeled him in to 5.6 seconds, but a stall at a hairpin on the stage saw Jennings stretch the margin to 10.5.

“If we can tidy it up, we’ll be right there,” Gass said at the end of Gartan. Sadly for him, he didn’t complete the following strage.
Jennings went back to Grovehall intent on making a statement.

“That is as hard as I can go,” he said as he emerged off Grovehall. Indeed, his lead was now significant. When the Subaru of Sam Moffett appeared next in line, he was able to confirm that Gass had gone.

The young Monaghan man was the man to profit, but he trails Jennings by 1 minute 3.7 seconds.

Jennings is now well in command, but on SS14, the last of the day at Gartan, the Kesh man stalled and lost some time.

“I was very nervous,” he said.

“I stalled her in at the pub there. I was sort of panicing, just trying to keep her neat and tidy. That is so hard to do now. It was great when we were in a battle, digging for dust with Darren, but it’s a different kettle of fish now.”

On his blistering stage at Grovehall that left the rest in his slipstream on a stage that claimed his nearest challenger, Jennings said: “I said to Neil going in: ‘We’ll give this one a go’. We’d been cautious up to that with the windscreen steaming up on us, but we had a good run in there.”

Derek McGarrity is up to third having thought earlier that he’d have to withdraw due to gearbox issues, while Donagh Kelly from Frosses is in fourth and Seamus Leonard is in fifth. The Omagh man went through a chicance sideways on Gartan and lost some time.

The leading Donegal duo in the event are Kilmacrennan man John O’Donnell and his Letterkenny co-driver Aidan Friel. The pair have been tearing up the tar and, despite clipping a rock in the Gartan stage they set an impressive time.

“We’re getting to grips with the car better now. We had a problem with our tyre choice earlier, but we’re back on the right tyres again and are setting top four and top five times. We’re loving it!”

O’Donnell’s Subaru is up on years on his competitors, but wee John isn’t bothered.

At the start of the first loop of Gartan, O’Donnell’s car made contact with the door of Darragh O’Riordan’s Fiesta. Co-driver Tony McDaid injured his hand but, having been in some initial distress, was fine to continue.
In Group N, Martin Doherty has a 13.2 second lead over Stephen and Suzanne Wright in what has also become a heated battle that ebbs and flows.

NATIONAL RALLY
IN THE battle of the Mk2 Escorts, Glenswilly man Manus Kelly continues to have a ding-dong battle with Gary McPhillips, the Monaghan man having a 6.5-second lead on Kelly.

“I’m going to have to stop rallying in Donegal – they always seem to be ding-dong battles,” said a smiling Manus, after his home stage on Gartan.

Kelly was blistering on the first leg of Grovehall, shaving eleven seconds off his deficit. ‘Mandy’ really stepped it up after coming off the morning stages.

“I suffered with the back tyres being a wee bit soft,” he said in referencing that he felt he could have been even quicker.

“If we had a harder compound tyre, maybe.

“But it’s been class. We had a brilliant run; Jesus, it’s unbelievable.

“Hats off to Gary McPhillips, he’s driving some stuff. We gave it a really good go there and there’s nothing in it.”

Frank Kelly and Adrian Hetherington have also been setting some good times in their Escort and are next in line, just ahead of professional Craig Breen, who is just a second behind Hetherington now.

“It’s completely different,” said Breen, used to the comforts of a works Peugeot and after damaging the steering.

“My mistakes were stupidity, but I’m not used to having so much lock on the wheels.”

“You’re driving from the rear all the time and you’re having to pre-empt things so much further down the line. It’s great fun though.”

A whole host of local crews are still standing in the national rally.

There will be six stages tomorrow: Glen, Atlantic Drive and Fanad Head, each to be done twice.