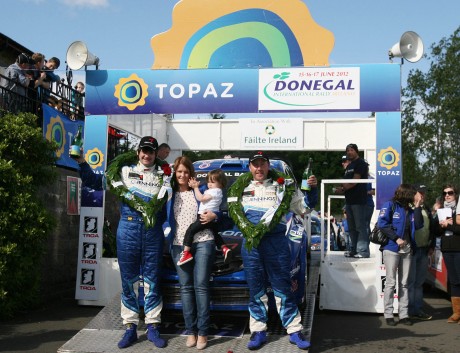 Garry Jennings and Neil Doherty winners of the Topaz Donegal International Rally in 2012.

IN A shake-up of the classic stages, the Donegal Rally organisers for 2013 have ensured that a cracker is in prospect this weekend – with Sunday’s stages already setting the pulses racing.

In a change from what would be the norm, Fanad Drive has been moved to the Sunday and the final day sees three spectacular stages. Along with Glen and Fanad Head, what is left of the 150 competing crews will tackle Atlantic Drive.

Atlantic Drive is a stage that has made or broke many crews over the years, a stage on which dreams can become nightmares. In terms of rallying, it is unrivalled – and that it precedes Fanad in the penultimate stage of this year’s event makes for a tasty conclusion.

Atlantic Drive is considered to be one of the top stages of any in the world: “12.5kms of sheer adrenaline,” it is billed.

When the crews leave the second loop of this classic stage, the men could be sorted from the boys as they head over the Harry Blaney Bridge and into Fanad Head – and, if it hasn’t, Fanad will separate the wheat from the chaff.

“We wanted to throw in a long stage to spice it up at the end,” said the Clerk of the Course, Eamon McGee.

“It is a stage that has thrown up a lot in the past – and will probably do so in the future, too.”

The new departure of having the Fanad peninsula on two consecutive days is just one of the tweaks that ensures the 2013 event is freshened up. A unique experience awaits those who will head for special stage 1 on Friday morning, Breenagh, and who will go through some rallying stages that are without rivals anywhere in motorsport.

Terry Harryman won Donegal as a navigator for Cathal Curley and Mark Lovell. Ari Vatanen won Donegal in 1978 and was with Harryman at the Safari Rally in Kenya one year. As they sat in the corner of a bar in Nairobi, Harryman overheard Vatanen explain the love of rallying. “You haven’t lived until you have done Knockalla, Horn Head and Atlantic Drive.”

There is the iconic image of Paul Harris wedging a Nova into Hugh McClatchey’s famous shed in the middle of Knockalla one year and McClatchey surveying the damage and sighing that he’d ‘be without a television now for the night’ with the aeriel in shreds before him.

These are stages that have always lured the best in the business. The late Colin McRae came here, his father Jimmy won here in 1980 and Sebastian Loeb was the victor in 2007.

“We always have the big names in Donegal – they all want to come here,” said McGee.

“All the boys want Donegal. If you can master Donegal then you’re on top of your game. The drivers we have here this year are a match for anyone.”

The entry list speaks for itself. Garry Jennings, the 2012 winner, heads the field in the WRC Subaru, with Declan Boyle, Derek McGarrity, Darragh O’Riordan and Darren Gass making up the top 5. With the likes of Josh Moffett and Martin Doherty competing in Group N, it too promises to be a corker.

And then there is the national rally – or the entertainers. The battle between the MK II Escorts will be fascinating. Manus Kelly, Gary McPhillips, Rodney Wilton, Damian Gallagher and Phil Collins are all men with serious aspirations here. But they are joined this year by Craig Breen who is trying lot in an Escort.

Breen is the current Super 2000 World Rally Champion and is the Peugeot Rally Academy factory driver in the European Rally Championship. His presence is certain to add zest to proceedings.

He finished second in the Azores Rally recently to move into second place in the European Rally Championship and he is now Ireland’s foremost Rally driver.

He, too, can’t wait to get at Donegal.

He said: “My last run in Donegal in a Super 2000 car ended abruptly on Fanad Head. A sudden tyre puncture led us to stop against what felt like a piece of Fanad Head itself. It was a shame as we were up to third overall at the time, and having a real go. Those stages are legendary for a reason, and when the chance came through Suirway Forklifts to go back, I jumped at it. For me it’s a case of unfinished business.”

Jennings runs at number 1. He and Neil Doherty scored a memorable and emotional win last year.

When he came in 2012, the Kesh man was considered to be an underdog in that his hired Subaru S14 was an unknown quantity.

Now, though, the secret’s out.

This time, Jennings will drive the Impreza WRC S12b which carried him to victory on the Rally of the Lakes a few weeks ago.

He said: “It is 15 years ago since I first started going to the Donegal Rally and I remember watching the likes of the late Bertie Fisher, never dreaming that one day I could win the rally. I reckon it is one of the best rallies in Europe and I am very proud to be running No.1.”

Drivers won’t tackle Inishowen this year with Friday’s stages returning to Breenagh, Cark Mountain and Letterleague, before they head for a gruelling Saturday in which they do stages Garygort, Grovehall and Gartan twice as well as the two frenetic loops of Knockalla.

The road milage between stages is considerably shorter this year.

McGee explained “We wanted a compact route to give them a challenge and to take the road miles down.

“The first day isn’t as long as it had been.

“In the times that are in it, every wee bit helps.”

Letterleague hasn’t been used for a while, but returns to day one, while Garygort is also back and Gartan remains on the Saturday.

McGee said: “Every driver loved Gartan and wanted it back.”

Saturday is a long day, but there are only eight stages. Organisers are content with their lot. McGee said: “You could probably go on Saturday for a different format, say like three stages done three times, but with the timing of it and road closures you don’t want to be inconvenincing people for too long. The format we have works well – for spectators and competitors.”

Following a safety briefing for the crews in the An Grainan Theatre, the rally starts from Letterkenny on Friday morning 11.15.

There are Friday and Saturday overnight halts in Letterkenny before the 17.30 finish ramp on Sunday at the Mount Errigal Hotel.

Sounds simple, but for the 150 competing crews, it will not be. The fast and furious pace allied to the challenging closed road special stage route laid out by McGee will see to that. The rally is the longest and toughest in Ireland these days.

Tens of thousands will flock to Donegal this weekend for an event that is seen as the jewel of the Irish Tarmac Rally calendar. A top-class entry list is virtually full and the tranquil settings of the 20 special stages are about to erupt once again.

Can Jennings emulate the likes of Curley, Coleman, Fisher, Nesbitt, Donnelly and McHale to retain his crown? Or can Boyle become Donegal’s third native winner? Or could the McGarrity or O’Riordan top them both? Can Manus Kelly succeed where he just missed out last year? Or will Breen prove too strong?

Questions that will only be answered at the Mount Errigal on Sunday evening.

The only certainty now is that when the drivers wake on Sunday morning, with two loops of Glen, Atlantic Drive and Fanad Head, there awaits before them one of the daunting days rallying known to man.

It’s what makes it a class apart.