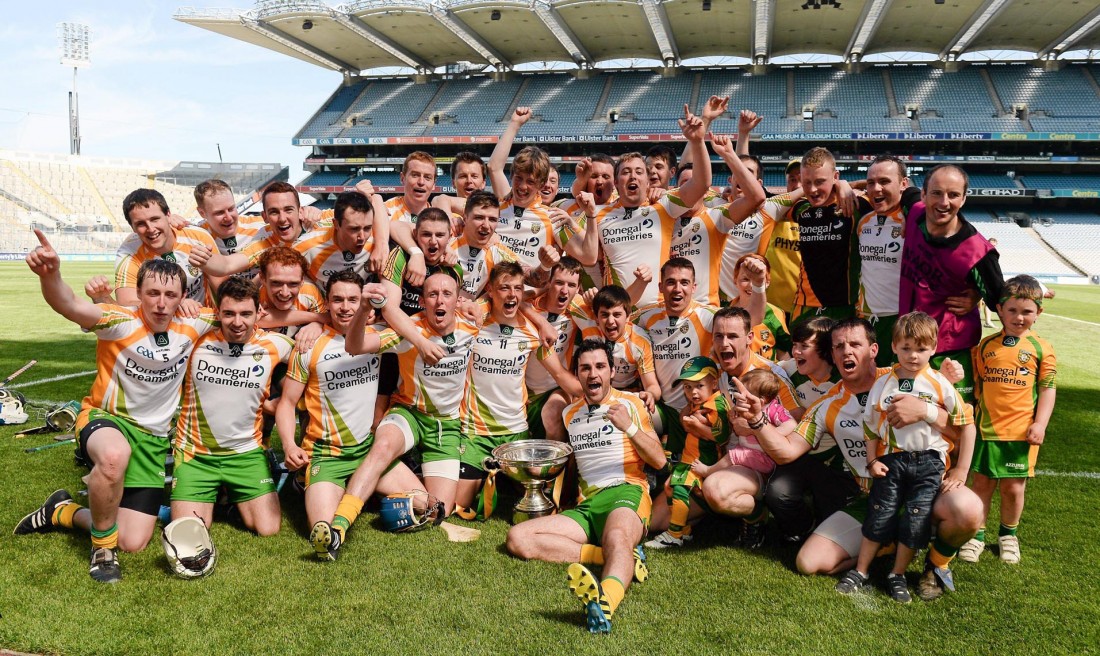 The Donegal team celebrate with the Nicky Rackard cup.

ALL the successful teams can chart their rises back to a point in time they see as the defining moment.

Last Saturday, the Donegal hurlers won their first ever Nicky Rackard Cup when they defeated Roscommon at Croke Park. It lifts into the Christy Ring competition for 2014 and it was a sure sign of the improvement in the small ball game over the last decade.

It was Donegal’s second Rackard final, having lost to Derry in 2006. In between times, they played in three Lory Meagher Cup finals, winning one in 2011, but last Saturday was the biggest day in Donegal’s hurling history, certainly since the days when they won Ulster Senior titles in 1906, 1923 and 1932.

Last May, Louth rolled into Letterkenny for a Nicky Rackard Cup semi-final and the Wee County advanced to the final after delivering quite the beating to Donegal. Ray Durack’s team was in for a few months of soul searching after being hammered 3-19 to 0-8.

In November, Durack assembled his panel in a meeting room of the Mount Errigal Hotel one evening.

It was make or break time.

“We had to do something,” Durack says.

“We’d been absolutely whipped by Louth, at home in a semi-final. We couldn’t afford to keep going like that so we met and we thrashed out our plans.

“Everyone, to a man, bought into it. The more experienced guys were just fed up with being a team that ‘nearly won’. They didn’t want to be a ‘nearly’ team.”

Durack brought Offaly native Adrian Gaffney in as the team’s coach and the squad began training under Adam Speer. Ardal McDermott, the 2012 captain who was taken on board as a selector this year, took over a little later.

It would not be an easy path.

“We had to knuckle down and we had a lot of work to do,” says team captain Joe Boyle, who lead his team up the steps of the Hogan Stand after a 3-20 to 3-16 win on Saturday.

“We started on gym work and we were really working on the endurance.

“It’s been a lot of hard work.

“Hurling has gone down that route now. It has started to change and teams are putting serious work into their conditioning.”

The fruits of their endeavours didn’t take long to bloom.

Donegal reached the Division 3A final and while they were narrowly beaten by Fingal in Cavan, they had come off the back of a promising spring and were ready for the competition that they’d been preparing for all along.

As the Antrim native stood assessing the 70 frenetic minutes, he rubbed that famous grey beret and promised that Donegal would return to the Jones’ Road some day.

“Our players have great pride in the green and gold of Donegal and we’ll be back again, there’s no doubt about that,” he vowed.

“We will be back here next year and I have no doubt that we will be competing for Division 2 hurling next year, because that’s where we have to be.”

Ninety years ago, in 1923, a Donegal hurling team won the Ulster Championship and came up against Limerick on a miserable day at Croke Park. It was a historic occasions as that Donegal team became the first GAA team to wear numbers on the rear of their jerseys. Donegal lost heavily, 7-4 to 0-1. It was 2006 before a Donegal side would clash ash in Croke Park again.

The team of ‘23 had players from areas that are hardly seen as hurling strongholds: M Ryan of Ramelton was at corner back, P Tobin from Convoy and D Taylor from Rathmullan were the wing-forwards, with M Killiher from Milford and St Johnston native E White in the corners.

The 1906 team that won an Ulster senior championship was filled entirely of Burt men. For years, Burt dominated the hurling landscape, but Setanta bit back a few years ago and MacCumhaills broke the divide in 2010.

“There is so much potential there,” says Sean McVeigh.

“You can see a lot of underage teams starting up now, for example in Letterkenny Gaels, Dungloe and Gaoth Dobhair.

“There are so many people working hard behind the scenes, men like Paddy Flood and Eunan O’Donnell. They do tremendous work and these boys deserve as much credit as anyone.”

McVeigh had scored the winning goal in their win over Roscommon in Athleague earlier in the campaign. Last Saturday, the St Eunan’s man netted one of Croke Park’s memorable goals. Setting off on a solo run from the ‘45, McVeigh left a trail behind him before he smashed into the bottom corner of the Hill 16 net. Kilkenny legend Eddie Brennan tweeted: ‘Take a bow son wat a goal superb finish’.

“That will always live with me,” McVeigh says.

“I have watched it a few times at home and I’ll never forget it.

“There were so many great scores, though. The performance was a real battling performance.”

There came a defining moment in the first half when Ronan O’Meara, the Roscommon full-back burst out of his defence and went to deliver the sliotar long. First, he was blocked by Enda McDermott, then hooked by McVeigh and blocked another time, by Paddy Hannigan, before he put the ball out of play.

“The forwards were all digging in and helping around,” Boyle says.

In 2006, the Donegal team seemed like tourists, capturing photos of the fabled old stadium, the great amphitheatre of Gaelic Games on which they’d battle.

“This time it was different,” says Boyle.

“We had a lot of belief this time.

“Usually, going into a final at Croke Park we would have been nervous and, in a way, boys would just have been glad to be there.

“We said all along here that we weren’t going to Croke Park for a day trip.”

Durack, like a headmaster watching pupils in the playground, watched in the lawns of Johnstown House as his players pucked around on Saturday morning.

“We got the sense of the occasion out of their heads – we were there to win a Cup,” says the Galway native.

“I knew from their body language that they were ready. There was a confident air around them, they were relaxed and they went to Croke Park well prepared.

“It was the biggest day in Donegal hurling history.

“We weren’t coming back without that Cup. These lads have a lot of hurling behind them, but they’d never put in as much effort.”

Croke Park can be a daunting prospect for the best of them. They say nothing can prepare you for what awaits as you emerge from the tunnel. Lee Henderson’s superb match-winning display in the semi-final against Monaghan catapulted him into the starting fifteen for the final. The MacCumhaills man had prepared as well as he could, but from MacCumhaill Park to Croke Park is a different ball game.

“It can be intimidating,” says Henderson.

Just back from a couple of months out for the semi-final, the Ballybofey man was undaunted last weekend. He ended with ten points to his name.

“It’s a fine stadium around it, but it’s just a pitch at the end of the day. The occasion got to us before, but not this time. The dimensions are the same and stuff, you just put all the rest of it off your mind.

“I was delighted to get a chance because it’s so frustrating watching on and being unable to do anything.”

McVeigh’s goal was a big moment for Donegal, although they trailed at half-time. When Paddy Hannigan batted home just 30 seconds after the restart, Donegal began to grow in confidence.

There were many heroes, too.

In Danny Cullen, Donegal have one of their most graceful hurlers of all-time. The Setanta man is like an artist at his easel when he’s hurling. Cullen is an elegant hurler with a ruthless streak in his veins and his 1-3 capped a magnificent performance for a player who’d been in the very infancy of his career in 2006 when he played in the Rackard final defeat to Derry.

Including 2006, Donegal have now played in five Croke Park finals in the last decade. MacCumhaills man Jamesie Donnelly is the only man to have played in all five. Early in the game last week as he contested a high ball Donnelly broke his left thumb in two places.

Five years ago, he snapped his cruciate and was initially advised by medics not to return to the hurling field. He’s back, though, and wasn’t going to let his mishap stop his day.

“Coming off wasn’t an option,” he says. I just got tore in. Colm (O’Neill, the physio) kept it moving at half-time. I wasn’t going to let that bother me too much. I was too busy hurling in Croke Park to be worrying about a sore hand.”

Two years ago, Jamesie’s daughter Ella May was born the day after Donegal won the Lory Meagher Cup. She was two last Thursday. At the final whistle, the teak tough MacCumhaills player rushed over to see his little gem.

“This tops them all,” he says.

“It wasn’t just Saturday alone, but the amount of work we put into it.

“It has been very rewarding. Ray and the management team really turned the screw on it. There’s no acting up now. You either do it or you don’t. And if you don’t, you’re gone. They have all put a phenomenal amount of work in.

“It’s a great squad to be involved in.”