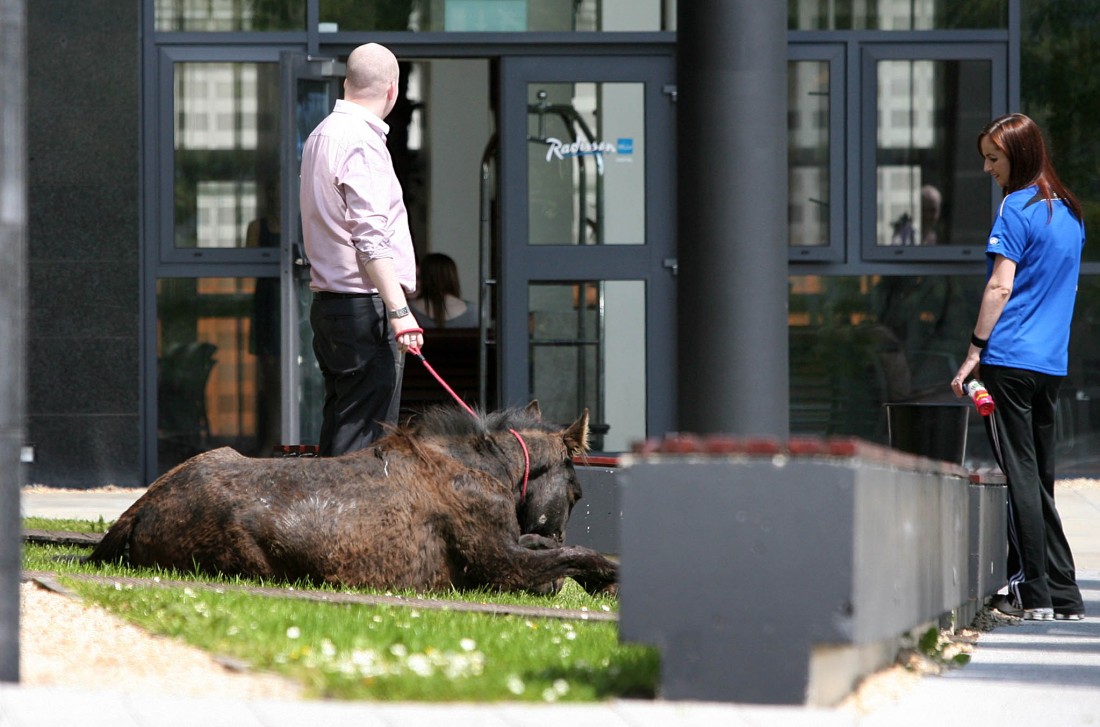 The horse is cared for after wandering into the grounds of the Radisson Hotel, Letterkeny, last week.

By Cronan Scanlon
A SPOKESMAN for the ISPCA has described as a “crisis” the increasing number of horses and ponies being abandoned and neglected in Donegal.

Mr Kevin McGinley, an Animal Welfare Inspector with the society, was speaking to the Donegal News after the abandonment of four ponies in Raphoe and one in Letterkenny, all within the last week.

Last Thursday, we reported that a malnourished pony was being fed and watered by staff and management at the four-star Radisson Blu hotel in Letterkenny after it wandered on to their property.

Sadly, the animal was in such a poor condition that it had to be put-down later that evening.

Mr McGinley also confirmed that four ponies, also in a poor condition, were found abandoned in a farmer’s field near Raphoe earlier in the week.

He also stressed that, despite it being a legal requirement, all the ponies involved were not microchipped.

“We were having a lot of horse problems over the past two years, however, it has reached real crisis levels recently with so many horses and ponies being abandoned,” Mr McGinley said.

“To make matters worse, none of these animals has been microchipped even though this is a legal requirement for any horse owner and their owners cannot be found .

Mr McGinley said their investigation into the Raphoe ponies was “ongoing” but appealed for information in relation to the one found at the Radisson.

He paid tribute to the staff of the hotel for caring for the two year-old brown male and appealed to anyone with any information should contact the ISPCA.

If you believe an animal is being cruelly treated or neglected, please call the ISPCA on 1890 515515 -Monday to Friday 9.00 am – 5.00 pm in the strictest of confidence, or you can fill in a confidential online complaint form at www.ispca.ie

Read the full article in this Friday’s print edition of the Donegal News or subscribe to our digital edition.