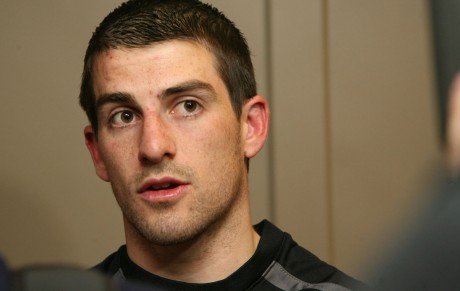 Ardara hope to have Paddy McGrath in action in Glen.

ADRIAN Brennan says that the weekend’s Comortas Peile na Gaeltachta in Glencolmcille offers his misfiring Ardara side the chance to ‘kick start the season’.

The Pearse Park side take on in-form St Michael’s in the first of the senior semi-finals this evening and Brennan is hoping to have an injection of some of his more stellar names into the squad to take over Glengesh.

The manager remains hopeful that Paddy McGrath will be able to line out. The Donegal star has been struggling of late with a quad injury, but could feature in Glen.

“Paddy is a big influence on our team and I really hope we have him,” says Brennan, who could also have Brendan Boyle and Stephen McHugh for the game, while Conor Classon is back from college in Liverpool again and is likely to go straight into the team.

“Hopefully this weekend we’ll be able to kickstart our season,” Brennan says.

“We’re trying to bring some lads back in again. We’ve had a very young team so far, but the young boys have done reasonably well.

“You need the experience though – and those four players add serious experience to the team.”

Ardara overcame Glenfin after extra time to book their place at this weekend’s county finals.

“I suppose there are some teams who wouldn’t take it too seriously, but it’s a chance to win a trophy and a chance to get to represent the county.”

The Division 1 League table is unkind to Ardara right now.

They are bottom-bar-one with just one win from their five games. While they’ve struggled for scores up to now, Killybegs, the bottom team, are the only side they’ve beaten in League action.

These are worrying times for a club who boasts the proud tradition of having an unbroken sequence in club football’s top flight since 1976.

“I have been reminded of that several times!” Brennan says.

“The League is about the 16 games. We haven’t had a good start, but hopefully we’ll be a lot stronger with the boys back.

“There are a lot of men following the team who would remember that time in the 1970s. There is a proud tradition of Gaelic football in Ardara, but sometimes it’s better to look at reality rather than at the past.

“Things change – look now at where the county players are coming from. Glenswilly has two All-Stars and I remember only about ten years ago they were playing Ardara in a Junior game.

“It is about Ardara bringing in players and that’s what we’re doing. There was a bit of a void where we missed a group or an age bracket, but we are recovering.

“Minor to senior is a big step, but we’ll try to throw the anchor out and hold what we have as well as building from there.”

The draw could hardly be more testing. St Michael’s look the business. They top the pile in Division 1 having won five from five, boasting a points difference of 41 that was significantly bolstered by Sunday’s 13-point win over Malin. With Colm McFadden and Martin McElhinney on form, they have the appearance of a side that’s in fine fettle right now.