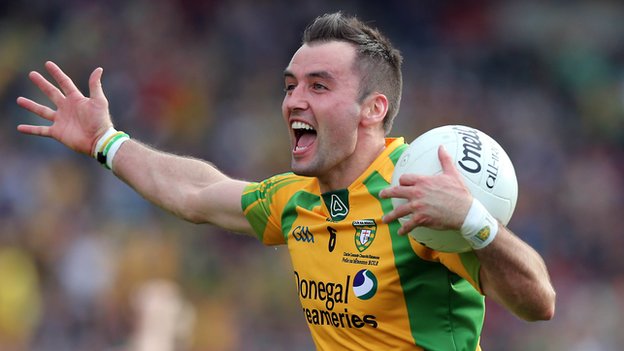 KARL Lacey made his long-awaited return from injury on Friday night as Donegal defeated Galway in a challenge game played behind closed doors at Markievicz Park in Sligo.

The four-times All-Star and the 2012 Footballer of the Year makes his return as the countdown to Donegal’s Ulster SFC opener with Tyrone enters its final three weeks.

In 20 days time, their swords will cross in Ballybofey and the appearance of Lacey on Friday night was a serious boost to Donegal.
It was the player’s first game since he played for Four Masters in the semi-final of the Donegal SFC at the end of October. From his withdrawal at half-time in their defeat by Naomh Conaill, almost 28 weeks had passed – 194 days to be precise – before he took to the field on Friday night.

Lacey had to undergo hip surgery before Christmas and while the county management had hinted early on in his rehab programme that he could return for the latter stages of the National Football League, May 26th was always the date being targeted by the Donegal town man.

Lacey played the full game for Donegal on Friday night and is expected to line out this afternoon for Four Masters in the All-County League when they tackle Kilcar in Towney.

It was a very positive weekend in terms of news from the county team. They were practically at full strength for this game, with Paddy McGrath also making his return to action, while there were appearances for Neil Gallagher, Eamon McGee and Neil McGee who have had injury trouble of late.

While Mark McHugh didn’t play in this game, he came on for the final fifteen minutes of their win over Malin on Saturday night in Towney and scored two points in an excellent display.

Patrick McBrearty scored a staggering 2-6 in that game. McBrearty, along with Michael Murphy and Colm McFadden accounted for the bulk of the scores in Donegal’s challenge win over Galway.

Murphy scored a goal for the Tir Chonaill men and continued his good run of form.

The game was strictly behind closed doors with both counties keen to keep their cards as close to their chests as possible.

Christy Toye, meanwhile, was also back in action, scoring a point off the bench in St Michael’s Comortas Peile na Gaeltachta win over Ardara in Glencolmcille on Saturday night.