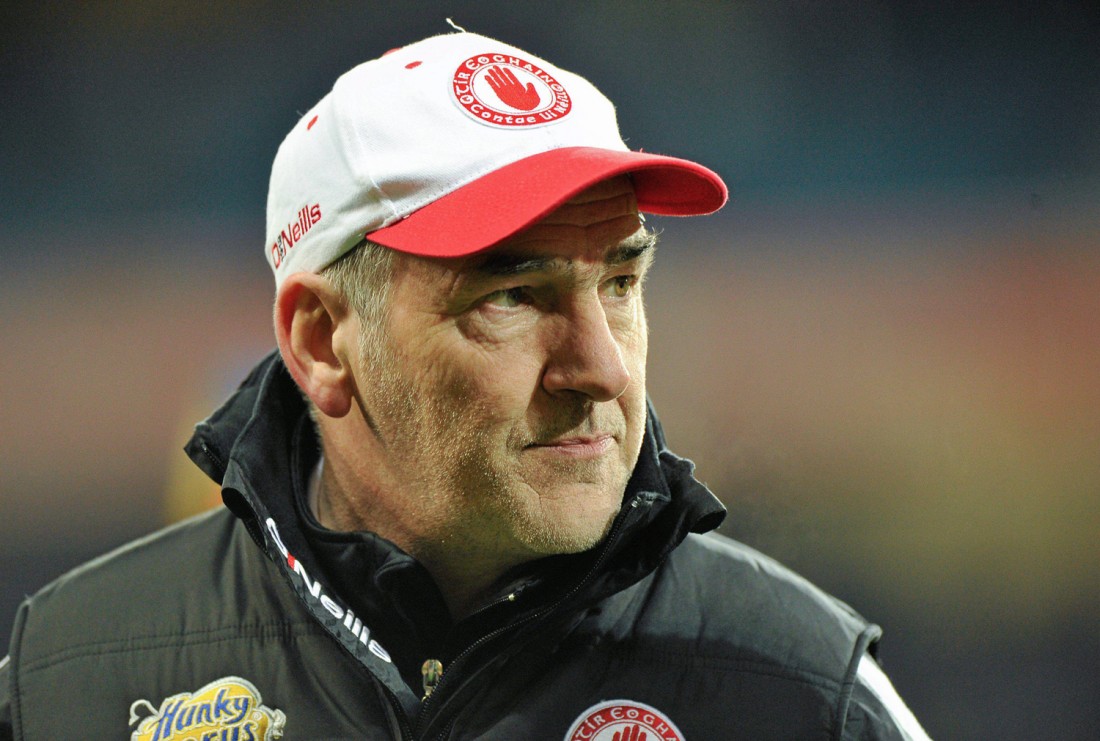 MICKEY Harte is expecting to have a full squad from which to select a team to face Donegal on Sunday week – and the Tyrone boss believes his squad is better placed this year to derail Jim McGuinness’s charge for a third Ulster title in a row.

In the last two Championships, Donegal have beaten Tyrone in semi-finals at Clones, but now as he prepares to take his team into Ballybofey on May 26th, Harte expects to a see a different Tyrone.

Tyrone have added the free-taking and sound goalkeeping of Niall Morgan to their squad and they have welcomed four-time All-Star Sean Cavanagh back into the squad after he missed last year’s Championship due to a shoulder injury.

Tyrone reached the National League final, losing to Dublin, and Harte has a twinkle in his eye again as he readies his squad to face Sean MacCumhaill Park’s cauldron next weekend.

“There is another year’s experience in younger players and you have Sean Cavanagh again. You don’t enter your Championship season without Sean Cavanagh and everything he has given Tyrone over the last decade and not be the worse off for it.

“Ronan O’Neill – who was in very good form at the start of last year – got an injury that set him back. We don’t know how good he would have become. Kyle Coney was our top scorer in the League and we lost him as well. Again, those players have to find that form again, which is a process they’re working on at the minute.

“Sean is back in good form, Niall Morgan is a bonus that we didn’t have this time last year and we have the likes of Matthew Donnelly and various others who have taken their game to the next level. That is good so far, but they have to develop to Championship level.”

Red Hands captain Stephen O’Neill trained fully for the first time on Tuesday night since the Clann na nGael man injured an ankle in the warm-up to the League final. PJ Quinn (back) and Dermot Carlin (Achilles) are also on the treatment table, while Aidan Cassidy has not yet returned to the fold from an ankle knock and the Augher midfielder is considered as the biggest doubt for the Ballybofey clash.

Justin McMahon came through Tuesday’s training, while Cathal McCarron is expected back in training at the weekend having suffered a dead leg in a club game with Dromore on Sunday.

Harte is still vexed at having been edged out by Donegal in two semi-finals, in 2011 and 2012, when the margins were so fine. Only Dermot Molloy’s late goal in 2011 and Paul Durcan’s dramatic late save, kept Donegal in front in those games. Harte believes that his team will push the All-Ireland champions all the way again.

“What I do know for sure is that they will be challenged and it will ask very hard questions of them,” he said.

“If they can answer those questions, they will be even more super men than they showed last year.

“It is a challenge for players to go back to that level. The biggest challenge is, because they reached the pinnacle: Do you have the desire deep within you to go back to do it again. You can’t answer that until you’re put to the challenge.

“Every day they go out they will meet that challenge. Whether it’s May 26th in Ballybofey that they get the answer or whether it’s in Croke Park on the third Sunday in September, we won’t know until it happens.”