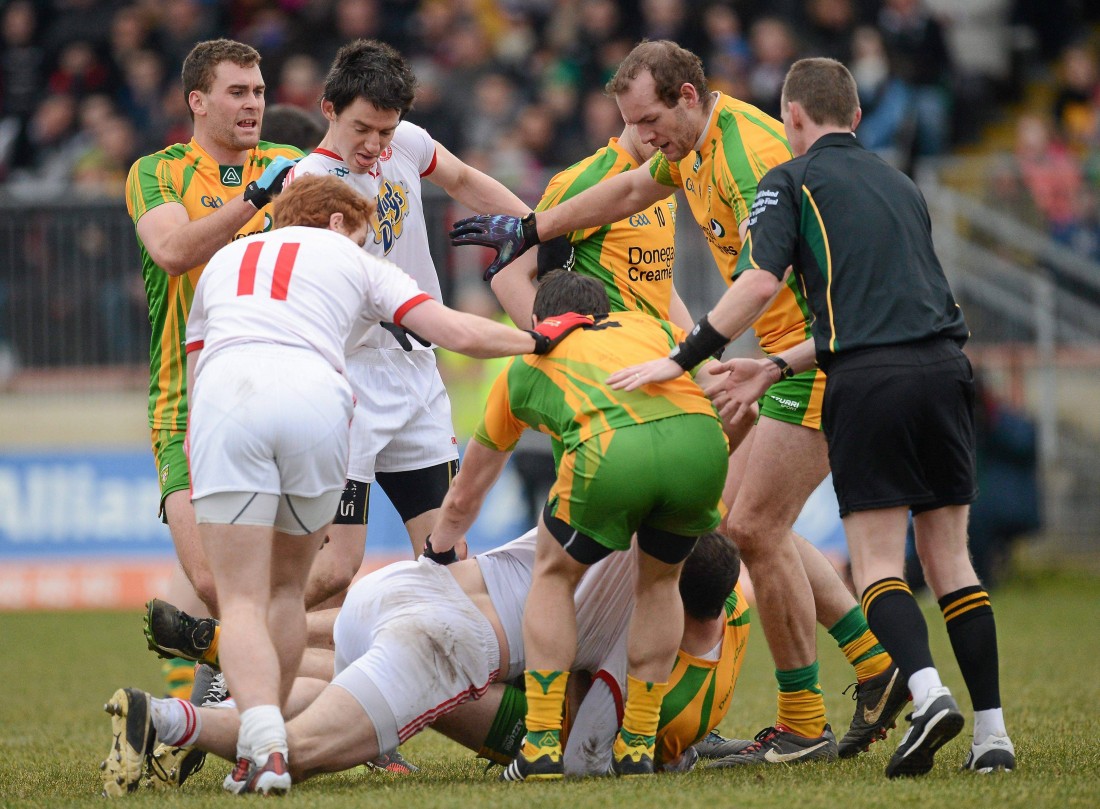 Stephen O’Neill, Tyrone, and Neil McGee, Donegal, during an altercation as players from both sides and the referee close in during the League meeting in March.

THEIRS is a rivalry that has been only sporadic since they met four times in the 1970s, but there has always seemed to be something dark, begrudging and yet fascinatingly captivating about meetings between Donegal and Tyrone.

In 1972, Donegal defeated the Red Hands to win their first ever Ulster championship. A year later, in Ballybofey, Donegal’s short reign as kings of Ulster was ended when the Tyrone won 0-12 to 1-7. It was a game played in front of a 12,000 crowd that at the time was the biggest ever seen at the venue, but the ‘Derry People’ account of the time paints a grim picture of the happenings of that afternoon.

The attendance, it says, became ‘enveloped in the very atmosphere of violent feeling…an exhibition on the field and in the crowd that those genuinely interested in Gaelic games will wish to forget.’

Neilly Gallagher was one of Donegal’s aces at the time and he’d been causing Tyrone all sorts of difficulty. In the 20th minute his afternoon was unceremoniously halted.

“Their most effective forward, Neilly Gallagher, was laid low with a ‘cowardly attack that left him with a severe gash along his left eye,” the ‘Derry People’ reported.

“In flew the cans and bottles as the crowd shouted angrily.”

The concussed Gallagher was carried off and taken to Letterkenny General Hospital. Tyrone later saw Seamus Donaghy sent off and their own player Patsy Hetherington require lengthy treatment.

Since the 70s, these teams have met just eight times in Championship football, Tyrone winning four, Donegal claiming three victories and there was a drawn final in 1989 for good measure, too.

Despite their paths not crossing too often, there are always high stakes when Donegal meet Tyrone.

Perhaps it is that there are so many close ties between the two counties, but there exists a rivalry here that goes beyond most others. Even when Donegal and Derry, two other ferocious neighbours, were jousting at the peak of their powers with McEniff and Coleman in opposing dugouts in those heady Ulster days of the early 90s it never quite felt like it does when Donegal and Tyrone stand in opposing huddles.

“Two tribes went to war and a ceasefire has still to be declared,” Damian Dowds and Donal Campbell wrote in Sam’s For The Hills of the meeting in Clones in the final of ’89.

After a last-ditch equaliser from Stephen Conway secured Tyrone a draw, they inflicted a chilling 2-13 to 0-7 defeat in the replay. It was a defeat that drew down the curtain on Tom Connaghan’s reign as manager after he’d come, literally, to within the kick of a ball of returning the Anglo-Celt to The Diamond in his native Donegal town.

“The rivalry that was born in Clones that July was immense and dark, particularly among the supporters. A dislike, perhaps mutual, swept Clones,” Dowds and Campbell penned.

“You don’t head to Clones with half your team looking down at you from the hill.”

That ’89 final appearance was the start of a run of five successive years when Donegal would take stand in Clones’ big July day. Up to the great theatre on the hill they went year-on-year.

The period was book-ended by games to Tyrone. Or more specifically, defeats to Tyrone.

In 1994, Donegal saw a golden chance present itself. All-Ireland champions Derry were stunned by Down and Donegal believed that their time was right again. Sometimes we can be fortunate that the future is protective of its secrets.

In Cavan, they took on a Tyrone team that was beginning to blood members of a successful double Ulster-winning U21 batch.

“They ripped us to shreds,” says Martin McHugh, 19 years from a day that would prove his last in a Donegal shirt. His game lasted 27 minutes and then his medial ligament went. It was a day that ended the inter-county career of the Kilcar man.

McEniff and Anthony Molloy bid farewell that day too as a Tyrone side including the likes of Adrian Cush and Peter Canavan won the day 1-15 to 0-10.

McHugh has few fond memories of Tyrone, but one things marked them out as being different for the ‘Wee Man’: “We always found them very hard to get past. They were incredibly physical and had a ferocious desire to win. It just seemed to matter more to Tyrone than anyone else.”

Under Jim McGuinness, Donegal have leapt over Tyrone in the Ulster standings. After denying Tyrone a three-in-a-row bid in 2011, Donegal are now heading into a summer that presents a three-in-a-row chance for them and, as fate would have it, don’t they meet Tyrone for a third year in succession.

“Whenever the draw was made, it was a real focuser for everyone,” says McGuinness.

“It was really down to earth again after the All-Ireland. As a management, it did give us a chance to say that Tyrone was on the horizon for us and it would be a huge challenge against top-quality opposition.”

Mickey Harte is matched by few, but it will hurt him not to have got the upper hand on McGuinness in two watertight Championship games. It will pain the Glencull man, too, that under his watch in the last ten years, Tyrone have lost more times (six) to Donegal than any other county.

These are the sorts of statistics that Harte has made a name by destroying. It is why he relishes this meeting in Ballybofey.

And yet he has made a point of insisting that it is not personal.

“We see it as a collective effort. Collectively, we owe Donegal a defeat in the Championship,” he says.
Harte has watched Donegal take over from Armagh as Tyrone’s nemesis. And boy was theirs a rivalry. From 1999 to that day Michael Murphy clasped hands on the Anglo-Celt in 2011, a duopoly between them existed.

Their stranglehold appeared unbreakable at times. Until McGuinness arrived that is.

“It is easy to see the parallels that may exist between the two,” Harte says of what has been a changing of the guard of sorts.

“Ourselves and Armagh were vying for pole position in the mid-2000s and we had many good battles.

“Since we met Donegal the last two years in the Championship and they pipped us, this is take three and it is getting into that realm.

“It is time that we sorted something out in that regard.”

These counties have always taken pleasure in popping the bubble of the other. When, in 2004, Tyrone swaggered into the Ulster Championship having collecting the first of their three All-Irelands the previous summer, Colm McFadden scored 1-7 in Clones as Donegal sent the champions hurtling to the qualifiers. 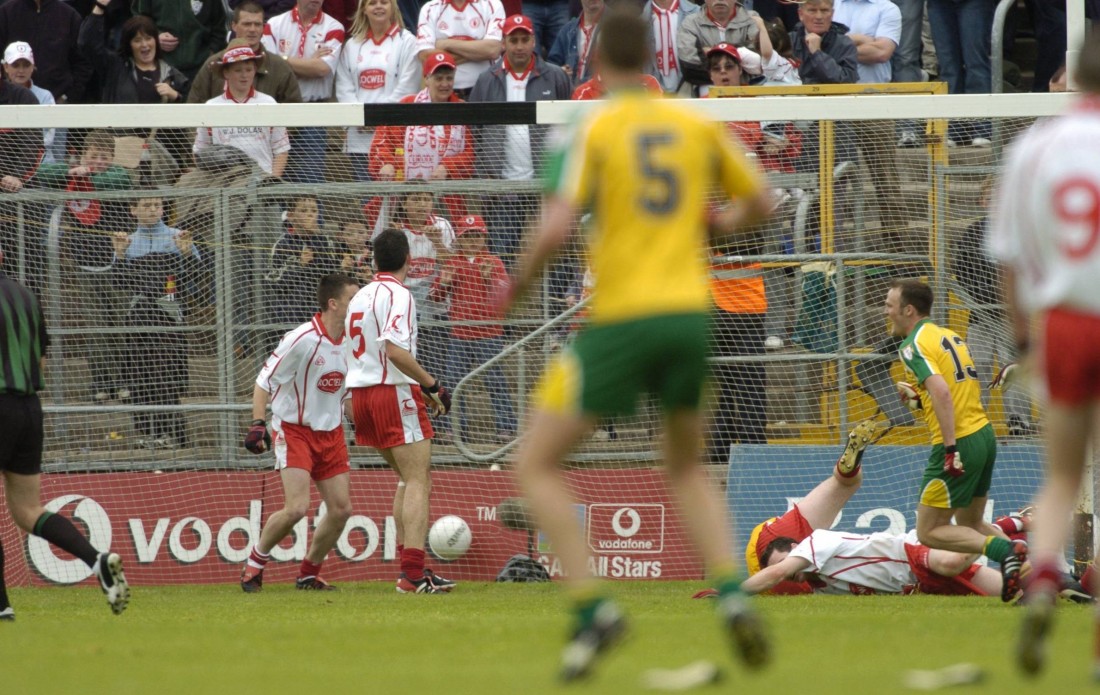 It had been an uneasy game with Niall McCready’s sending off prompting an angry response from McEniff:

“Every one of the players was warned to keep their mouths shut and their heads down.”
The defeat left a sour taste from Strabane to Aughnacloy. Harte wrote in his autobiography: “We had no reason to believe we couldn’t get past them…When we didn’t, it left a mark.

McFadden hit headlines again three years later, but this time it was for a late punch that earned a red card. Kevin McMenamin also saw red on a day when the early promise of a first-ever League title win evaporated into a Clones sky filled by Ryan McMenamin’s haunting cries: “We have them, we have them. They can’t handle it.”

“They put a lot of effort into it. The more you win, the closer you are to getting beaten,” Harte said on a day that surely gave him satisfaction in beating a team managed by the man he edged for the Tyrone job in 2003. It was a defeat from which Brian McIver’s tenure never really recovered.

Three times during a six-year period from ’03-’08, Donegal folk watched the streets of Omagh, Dungannon and beyond fill with heaving masses of red and white clad folk toasting Sam Maguire’s arrival.

In many instances, any delight shown from these corners felt bordering on begrudging,

“There would have been a bit of jealousy of the success that Tyrone had, so the rivalry would have been there in that sense,” admits the Donegal goalkeeper, Paul Durcan.

“Maybe the rivalry wouldn’t always have been going both ways.

“They are the team in Ulster and have been for the last ten years. We’re just trying to get up to that level where we can compete with them.

“Luckily we went on a step further last year. We’re still not as successful as they have been and we want to get there.”

The feelings flipped last September: it was Tyrone’s turn to crane the necks towards the neighbours’ big bash wondering where the invites had gone.

For Donegal supporters from certain quarters, the past two triumphs will have drawn quite the satisfactory looks. Time was when Donegal fans snaked through Tyrone villages, returning in silence after painful Ulster defeats in Clones, only to on occasion find donkeys stationed strategically by the roadsides around Aghyaran decked in Donegal’s colours. The message was obvious.

When Mark McHugh talks of this as being ‘the biggest first round game, bar none, in a long while’, he isn’t far off.

“There is so much riding on it,” the Kilcar man says.

Jim McGuinness was reminded of Harte’s instance that Tyrone ‘owe’ this Donegal side a defeat.

Like many of the 6,707 Donegal folk lucky enough to obtain a golden ticket for admittance into Sean MacCumhaill Park, the dark days still spin in the Glenties man’s mind.

He says: “If you look at recent history, we probably owe them a couple more before it gets level.”

That ceasefire still seems some way off. 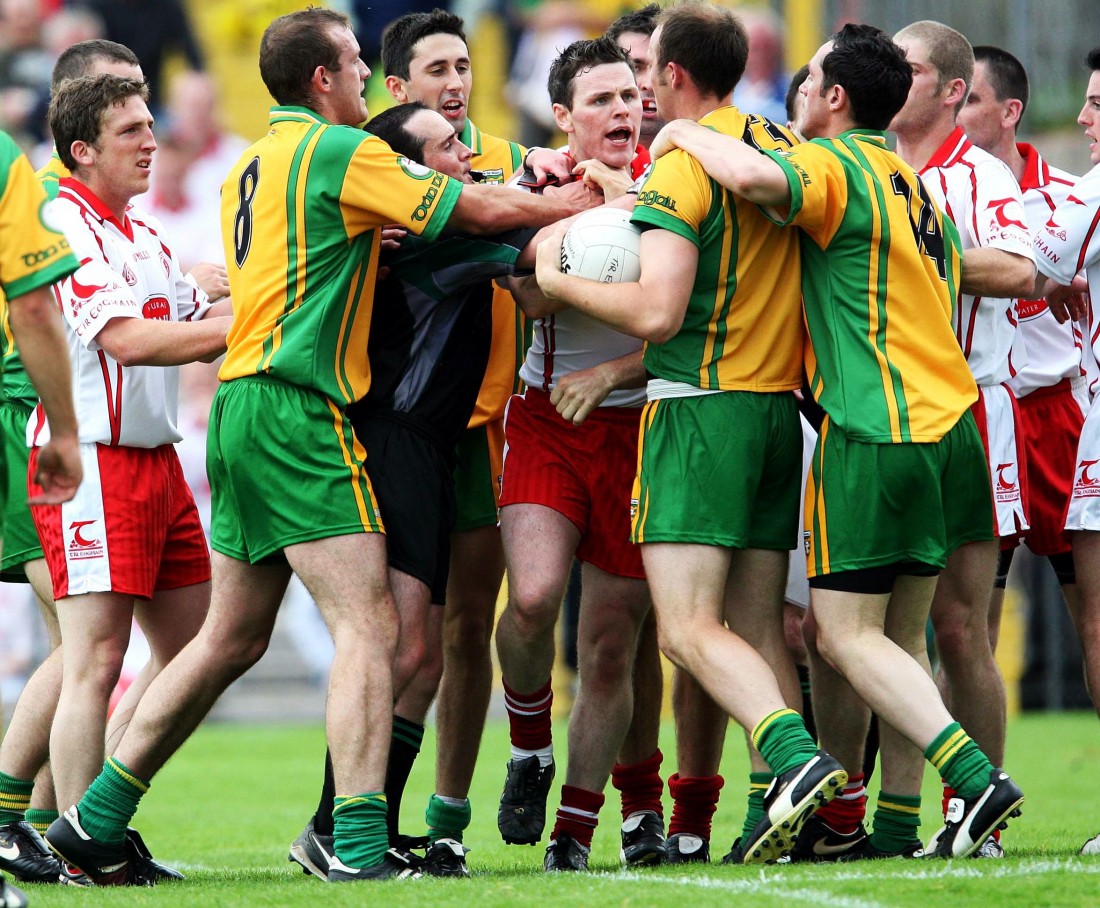 Tempers fray between Conor Gormley and Colm McFadden in 2007.