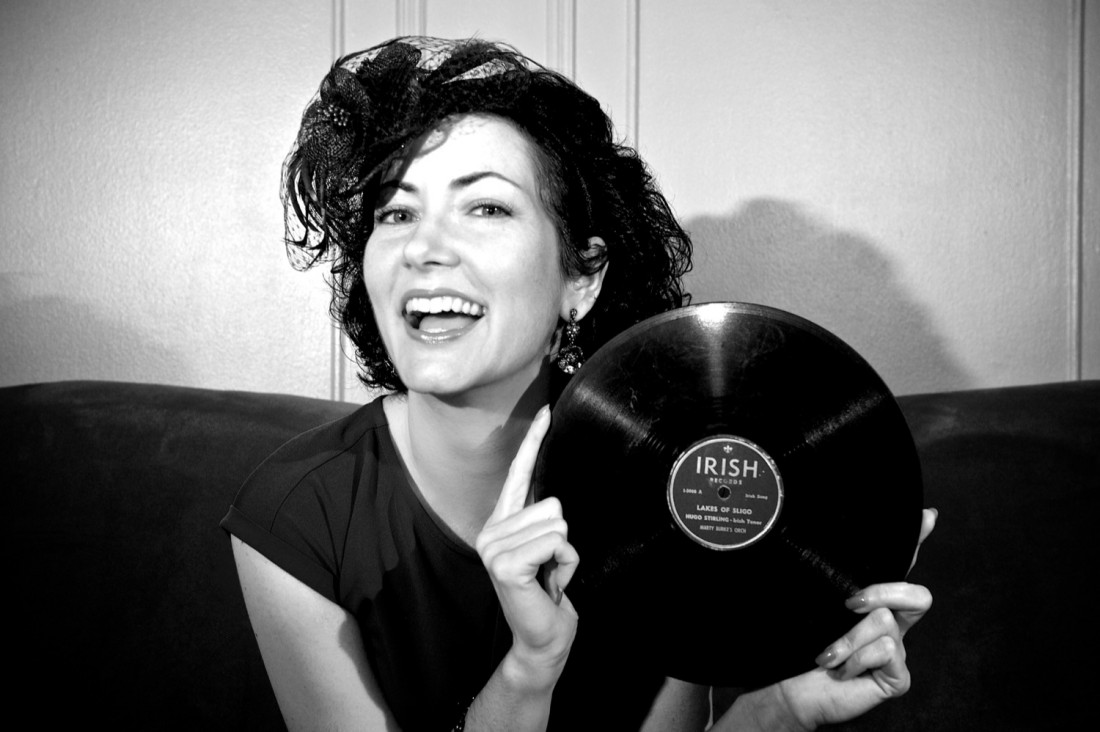 BY SEÁN P. FEENY
A WELL-known adopted daughter of South West Donegal has just released her eagerly-awaited third album which once again defies logic and brings you old Irish folk song favourites like you’ve never heard them before, as well some smoky new jazz songs with a vintage sound.

Tara O’Grady has just released her new album A Celt In The Cotton Club, a title which is the perfect description of what the singer represents.
The daughter of Gortward native Mary (nee Conaghan) has been compared to legendary singers such as Billie Holiday, Aretha Franklin and Patsy Cline.

But have you ever heard any of these singers turn old Irish folk favourites into modern jazzy tunes like you have never heard before?
Born and raised in New York, Tara O’Grady has very close ties to Donegal and has, in fact, spent most of her holidays in the family home near Mountcharles.

Tara once even represented New York in the Mary From Dungloe International Festival and has since judge the Donegal Association’s Mary Selection in the Big Apple.

To explain how Tara was inspired to title her latest album A Celt In The Cotton Club we must go back a few years when she was recording her second album, Good Things Come To Those Who Wait (2011), in Nashville, Tennessee.

It was while she was working with the Nashville musicians, who have worked with everyone from Alison Krauss, Emylou Harris and Elvis Costello, that one of them tweeted ‘I’m sitting her with Tara O’Grady, A Celt In The Cotton Club’.

The Cotton Club was a famous jazz music night club located in Harlem from 1923 to 1940 where some of the most famous jazz musicians and singers of all time performed, including Duke Ellington, Count Baisie, Ella Fitzgerald and, of course, Louis Armstrong – not many ‘Celts’.

Even Tara’s own band mates say she sounds nothing like she looks like, A dark-haired Irish girl with a voice that’s a throwback to the American Jazz singers of old.

So you can imagine it comes very unexpected when you hear this unusual and beautiful voice sing songs like Black Is The Colour like no one has ever done before – as a latin jazz number. It sounds like it shouldn’t work, but trust us – it does.

She said: “I wanted to be a bossa nova, but the sax player surprised me with his live solo and all our mouths dropped when he finally finished. It’s one of my favourites on the album.”

Tara is a popular face on New York’s Irish scene where she would meet household names from the arts, including Irish-American actor Malachy McCourt, brother of the late famous writer, Frank McCourt (author of Angela’s Ashes).

Tara said: “Malachy (McCourt) often sings Wild Mountain Thyme after a night of reading at the Irish American Writers and Artists salons in Manhattan, and I told him one night, I hear that much faster in my head and he said he was looking forward to hearing my version.”

One of three Irish covers on the album, Tara’s swinging version of the song is a breath of fresh air for anyone who wanted to hear something new done with these old favourites.

While her first album, Black Irish (2010), featured nine Irish covers song in Tara’s unique jazzy way, the New York beauty put pen to paper and wrote her own songs for her second album.

For her third album, Tara decided to go for a mixture of putting her own stamp on old Irish folks songs, writing her own material and also getting her family involved.

The very haunting That’s What The Miner’s Would Say, co-written by sax player Michael Hashim, is about over 100 Irishmen who died in a historic fire in a copper mine in Butte, Montana.

Tara said: “I wondered what their last thoughts were, and since there was no oxygen and they basically died for lack of air, I imagined what they wished they could breathe in, and most were memories of Ireland. So yes, that couldn’t have been a bright song.

“The sax player played a disturbing melody on piano under my vocals when I first sang him the lyric, and he felt it more like Strange Fruit by Billie Holiday, because it was such a tragic event.”

Another original song featured on the album is In Belfast Tonight, inspired by a trip to the city while back home in Donegal last summer.
“I wrote the after spending a night in Belfast last August with some native musicians and artists at a trad session in a pub there. I have actually been asked to perform In Belfast Tonight at an upcoming Belfast Conference in New York this summer.”

Tara’s brother Tom wrote the music To Be Missing In The Sun and La Dee Da, which were inspired by the music of Van Morrison, so it’s very fitting that Tara also features a very soulful version Too Ra Loo Ra (An Irish Lullaby), famously recorded by the Belfast native.

Tara is eager to put on a show in Donegal on one of her next trips very soon, so be sure to see this fantastic singer the next time she is back home in the county.

If you would like to find out more about Tara O’Grady, check out some of her music videos on YouTube and to purchase her new album log onto www.taraogradymusic.com