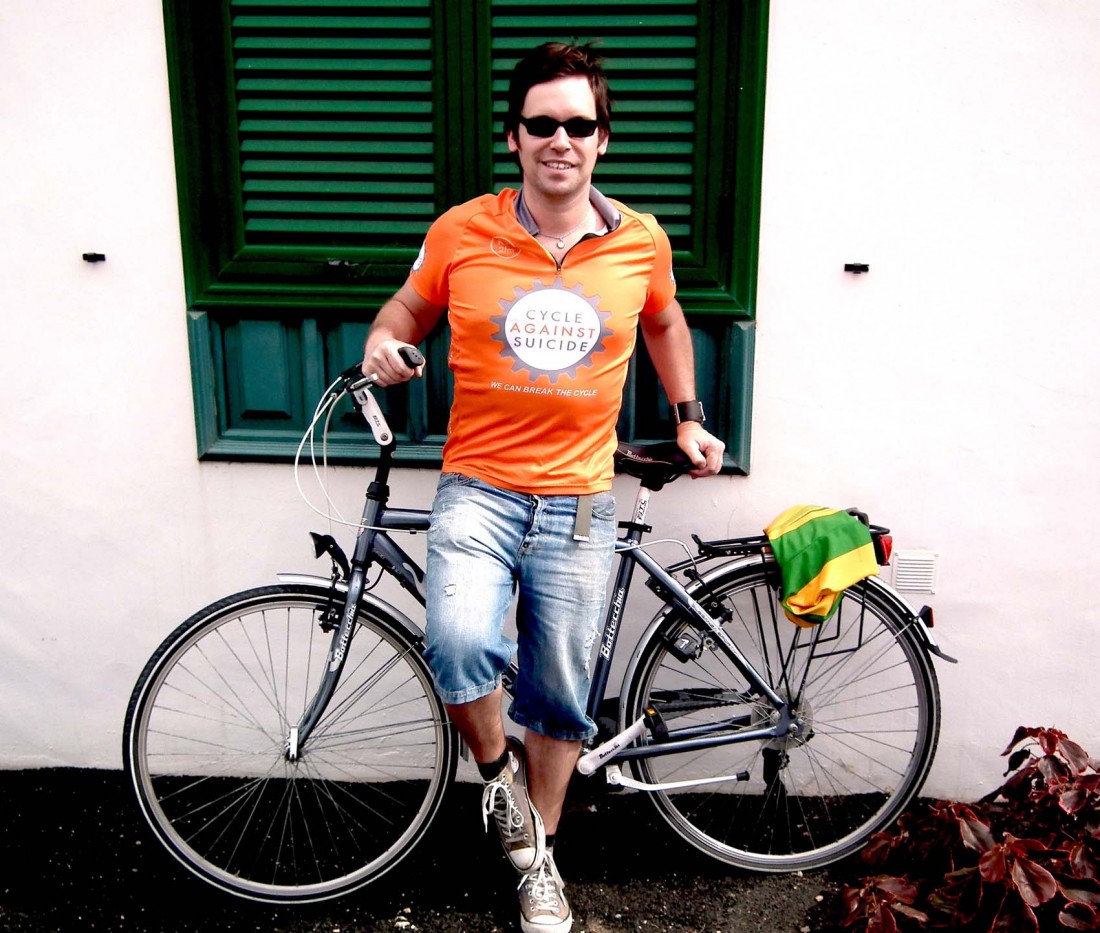 Rpry Gallagher is playing his part for Cycle Against Suicide.

The Kilcar man is helping to promote Cycle Against Suicide which will take place nationally from Monday, April 22 to Sunday, May 5.

Starting at the Phoenix Park in Dublin, the 1,400km awareness cycle will take its route all around the country, and finish back in Dublin again.

The schedule of regional events will see local personalities, as well as suicide prevention and bereavement support experts visiting 26 schools along the way, educating young children to help ‘Break the Cycle’.

Participants can take part in a section of each 100km leg, an entire leg, multiple legs, or even complete the entire cycle.

The project was developed by businessman Jim Breen with the objective of raising awareness for the considerable help and supports that are out there for anyone battling depression, at risk of suicide, or those coping with the loss of loved ones due to suicide.

Rory got involved in the initiative through a Donegal town native who contacted him after finding out that the former Revs frontman had also battled depression.
Justin Mitchell, originally from Donegal town, has been living in New York for the past 15 years and is friendly with Jim Breen and helps to promote the charitable project.

It was through the now legendary Jimmy’s Winning Matches YouTube video that Justin learned more about his fellow Donegal man Rory and subsequently contacted him.

Rory said: “Justin watched some of the other videos online that I am featured in, including a TV3 interview where I talked about my battle with depression.”
In September 2011 Rory released his wonderful and adequately named song The Battle To Stay Positive to help raise funds and awareness for Ó Lá Gó Lá, an Irish organisation set up to help reduce suicide, depression and stress-related illness (watch the video below).

Rory had availed of this charity’s services two years earlier when he was suffering from depression badly after disappointments in the music industry and falling into the trap of working too hard, gigging every night and drinking Jaeger and Red Bull to keep on the go.

After being diagnosed as clinically depressed, Rory was able to overcome his depression and wrote the song The Battle To Stay Positive, inspired by notes he had taken in a diary.

We all know, of course, that the recent years have been very good to Rory with the nation taking notice of what a fantastic songwriter he is with songs like Ryanair Blues, The Boys In Green and Jimmy’s Winning Matches, putting Rory back on the map.
These were all either novelty or charity songs, but music fans then listened to Rory’s other brilliant original material like Champagne Lifestyle On Coca Cola Wages or Colours.

Since the whole Jimmy’s Winning Matches madness of 2012, Rory and his wife Cara have gone on to open up their very own establishment, The Island Bar, in the old town of Puerto del Carmen on the Spanish island of Lanzarote.

His commitments to the new business have meant that he will not be able to participate in Break the Cycle, which begins next Monday, but this didn’t stop him from happily agreeing to help promote the event and create awareness.
He said: “When Justin called me and told me about the charity project I told him I’d be delighted to get involved and help out in promoting the campaign.”

According to the National Suicide Research Foundation (NSRF), suicide is claiming the lives of at least 500 people each year in Ireland, which is three times higher than the number of deaths on our roads.

“It’s shocking how much of a taboo subject depression still is in Ireland; it’s embarrassing for some people even to mention it and this is something this campaign wants to fight.

“When I first looked at the campaign website there was one line that really struck me – ‘It’s OK, not to feel OK’, I really liked that line.

“There is only so much you can do with music, so it is great to see how these people will be taking to the streets of Ireland to promote the campaign and spread the word.

“I really wish I could do it myself, but I hope when people read this article they will be encouraged to join the campaign on the Donegal routes, whether it is to donate or participate – those three or four euro in the bucket will make a big difference.”

To learn more about the Donegal route and key stops along the way, get involved or sign up to the campaign visit www.cycleagainstsuicide.com. For further news, follow @CASuicide on Twitter or visit the campaign on Facebook.