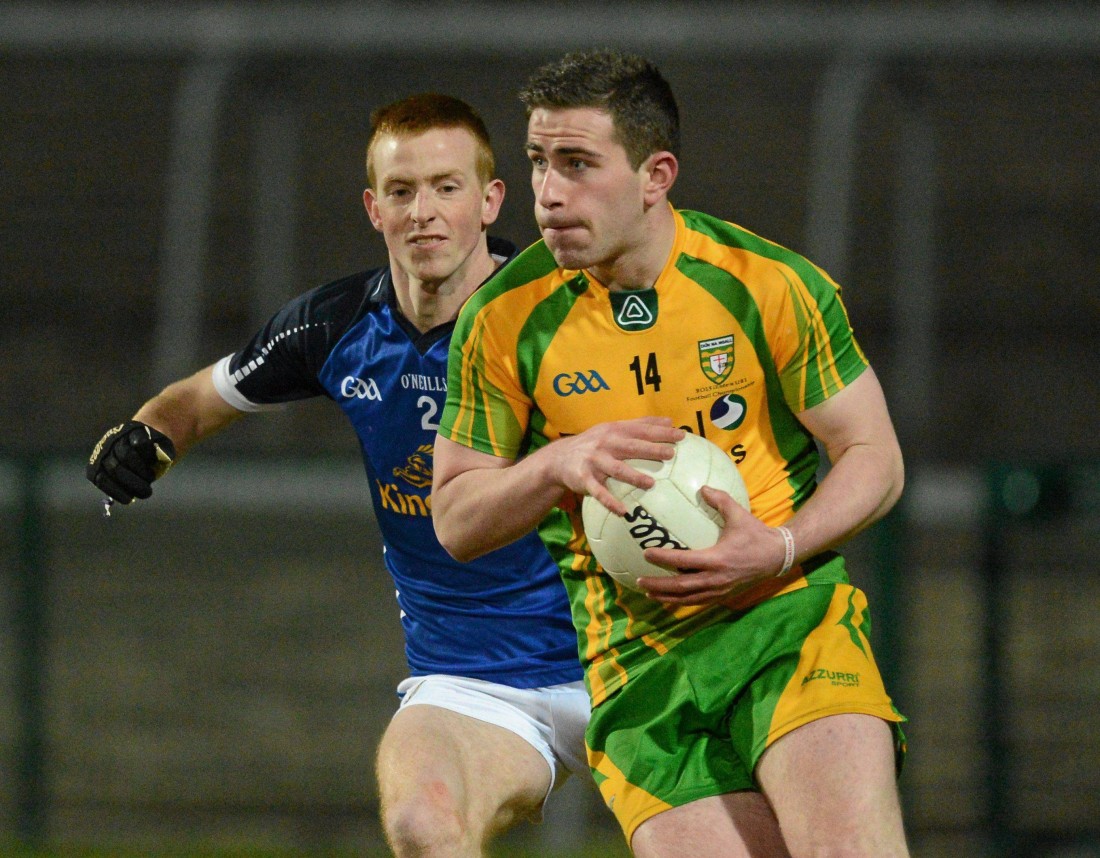 Patrick McBrearty gets away from Jason McLoughlin in tonight’s final.

By Chris McNulty in Enniskillen

A GALLANT Donegal fight-back was not enough to derail Cavan’s bid for a third successive Ulster Under 21 Championship title at Brewster Park tonight.

With Patrick McBrearty in sumptuous form in the second half, Donegal made a real fist of this game, but the damage had been done in a first half that paved the way for the Breffni boys.

Willie Gillespie’s goal seven minutes into the second half led spirited Donegal into a comeback that threatened to spring another surprise from Maxi Curran’s side.

Indeed, the game’s outcome rested upon a knife edge, until Peter Reilly’s Cavan managed to pick off a couple of late insurance points, from Jack Brady and Paul Graham, to secure their first-ever three-in-a-row Under 21 success.

With McBrearty on song in the second half, Donegal did come close, but they had left it behind them and with Ryan McHugh and Eoin McHugh having been forced off injured, they had lost two players whose dynamism was sorely missed.

“Over the hour, Cavan were the better-balanced team and they picked us off at will,” Curran told the Donegal News after the game.

“They are brilliant at that. They play an impressive brand of counter-attacking football.

“Cavan’s experience definitely comes into it and there was a massive Cavan crowd there as well.”

Indeed the numbers game painted a stark warning for Donegal: Patrick McBrearty, in six Ulster Championship campaigns at underage level, had won just one game before this year; while Cavan had players, like the captain Feargal Flanagan, who had not lost at this grade.

The Breffni had started like an express train. Man of the Match Chris Conroy and Gerry Smith scored wither side of a free from Enda O’Reilly to sweep them into a three-point lead by the seventh minute.

County minor Darach O’Connor, a late replacement for Ciaran Cannon on the Donegal side, popped over the Tir Chonaill’s side’s first score – and they would rue a couple of chances that weren’t converted.

They didn’t score again until McBrearty fetched from Gavin Gallagher to swing over in the 28th minute.

After McBrearty and Gillespie pulled goal chances wide of Conor Gilsenan’s left-hand post, Cavan stretched their lead to five as Conroy and O’Reilly scored twice in the space of a minute.

By that stage, Donegal had lost the services of Ryan McHugh, who hobbled off after 18 minutes, feeling the effects of the quad injured that had rendered him a doubt pre-match.

A beauty off Smith’s right boot in the closing minute of the half gave Cavan a 0-7 to 0-2 lead at the break.

Odhrán MacNiallais snatched a goal chance off target just 17 seconds into part two, but they were given something of a lifeline when Willie Gillespie flicked to the net in the 37th minute.

Donegal scarcely deserved to be in the game, but with McBrearty stroking over four in a row, they were within two points heading into the final five minutes.

Brady stemmed the flow with a pair of frees in amongst McBrearty’s haul, but Donegal wouldn’t go away. O’Connor should have pulled the trigger for a goal, only to fist wide, before an insurance point by sub Paul Graham raised the roof from the huge Cavan following, who toasted the capturing of a historic three-in-a-row.

“We have worked so hard for this – this is the result of thousands of hours of training and effort,” said the Cavan captain, Feargal Flanagan.

“We aren’t just about numbers 1 to 15. We have a panel of 40 players and all of them deserve credit for this. It just shows what a collective effort can do.”

For Donegal, this brings to an end a campaign that has lasted longer than many predicted. Curran said: “They did themselves proud. No one can fault them for their effort.

“They can leave tonight with their heads held high. It has been a great campaign. No one expected anything from them. They ran Cavan to the pin of their collar and I am very proud of them.”