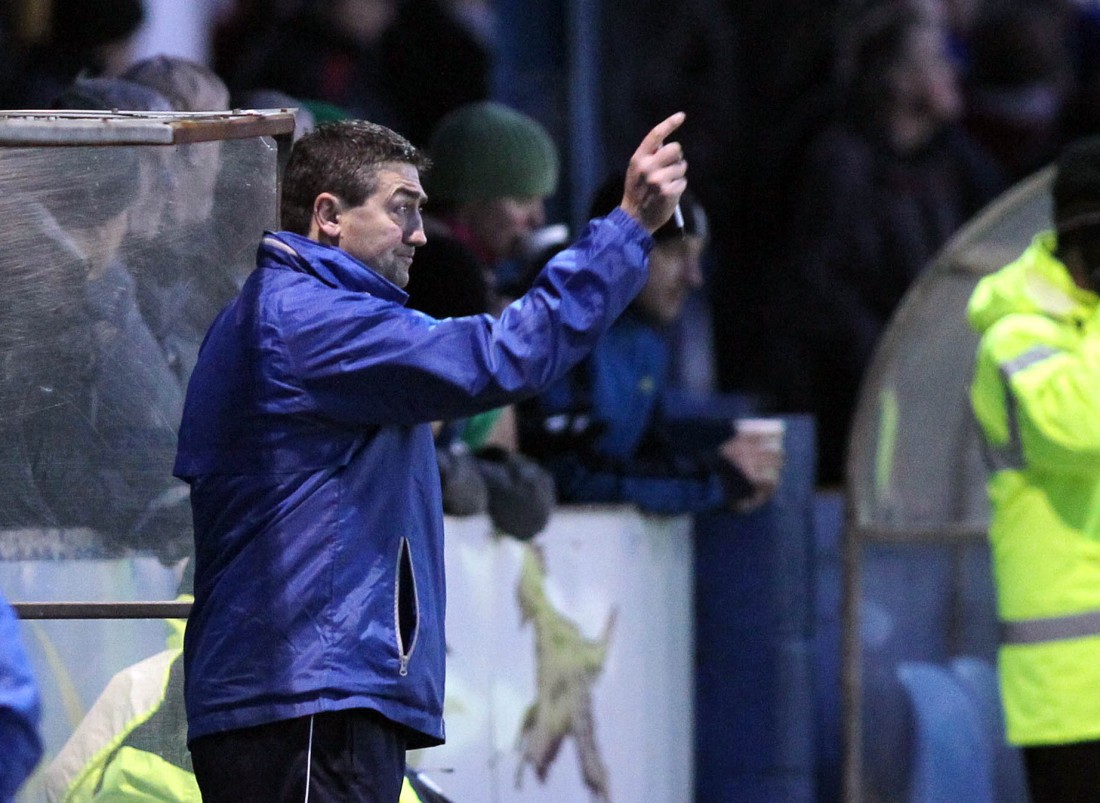 By Chris McNulty in Athlone

Coughlan powered home from close-range after Philly Gorman had headed down a magnificent delivery from Barry Clancy to earn a result that moves the Midlanders level on points with the Donegalman.

This was a night that will have left Peter Hutton with some questions to ponder on a night when a bold team selection didn’t conjure the magic it had intended.

Hutton sprung two surprises with wingmen Michael Funston and Marc Brolly dropping to the bench. Matt Harkin came in on the right for a first appearance since the 4-1 League Cup win in Mayo, while the 20-year old Mícheál Doherty was handed a first start on the other flank.

It had been an attack-minded team sent out by Harps, but there was nothing penetrative about their play, a shot under pressure by Kevin McHugh that was easily collected by Paul Skinner the best they could manage in the opening half.

Doherty showed flashes but moments after an over-the-top challenge on Coughlan, he was replaced in the 66th minute, having taken a heavy hit himself. The 20-year old did have Harps’ best chance, but off his right boot, his weaker, he saw a clean, crisp effort come off the inside of the post.

Through the middle Harps didn’t manage to muster much in the way of a threat and that effort by Doherty in the 58th minute was the closest they came.

The hairline fracture of his ankle that forced him out of last week’s scoreless draw with Wexford meant that Thomas McMonagle could not be included. It robbed Harps of a player who had played every minute of the 2012 campaign and his presence was sorely missed.

Athlone hadn’t been much more adventurous in that opening period, but the hosts did have the slightly better plays.

After 90 seconds, Robbie Clarke delivered a teasing free-kick on top of Ciaran Gallagher from the right-hand touchline, but the Harps netminder gathered after Philly Gorman narrowly failed to get a boot on it.

Gorman returned from suspension to take his place in the starting XI and his was a presence worth watching by Harps.

In the main the chances were restricted to set plays, though Ryan Coombes had an attempt 20 yards out that he just couldn’t keep down.

Full-back Neil Harney, restored to the line-up in place of the suspended Roddy Collins jnr, curled a free over the bar after Keith Cowan had barged into Gorman.

Harps had a real scare when they failed to deal with a Harney delivery, eight minutes into the second half, and Gallagher had to be brave to come and palm away with Gorman intently lurking. Harps came into the game for the first time with McHugh slipping to Doherty, only for his cleanly struck effort to strike the woodwork.

Without Sean McCarron Harps’ attack again lacked that unpredictable spark the Derryman can create and it was a night when their attacks broke down frustratingly at will.

It was a game that from its early minutes had the feel of one that would be decided by its first goal.

That arrived with the clock in its 70th minute as Coughlan rifled home. From there, it was Roddy Collins’ team who looked the most likely. Coombes went close, but was denied by Gallagher and Gorman deflected a powerful pass from the substitute Ian Sweeney narrowly wide.

It’s a win that hauls Athlone neatly up the ladder, but after a hugely encouraging start by Harps the Ballybofey brigade has now taken just two points from nine and they haven’t found the net now in 209 minutes.

With back-to-back home games with Salthill and Waterford to follow they have chances for redemption.