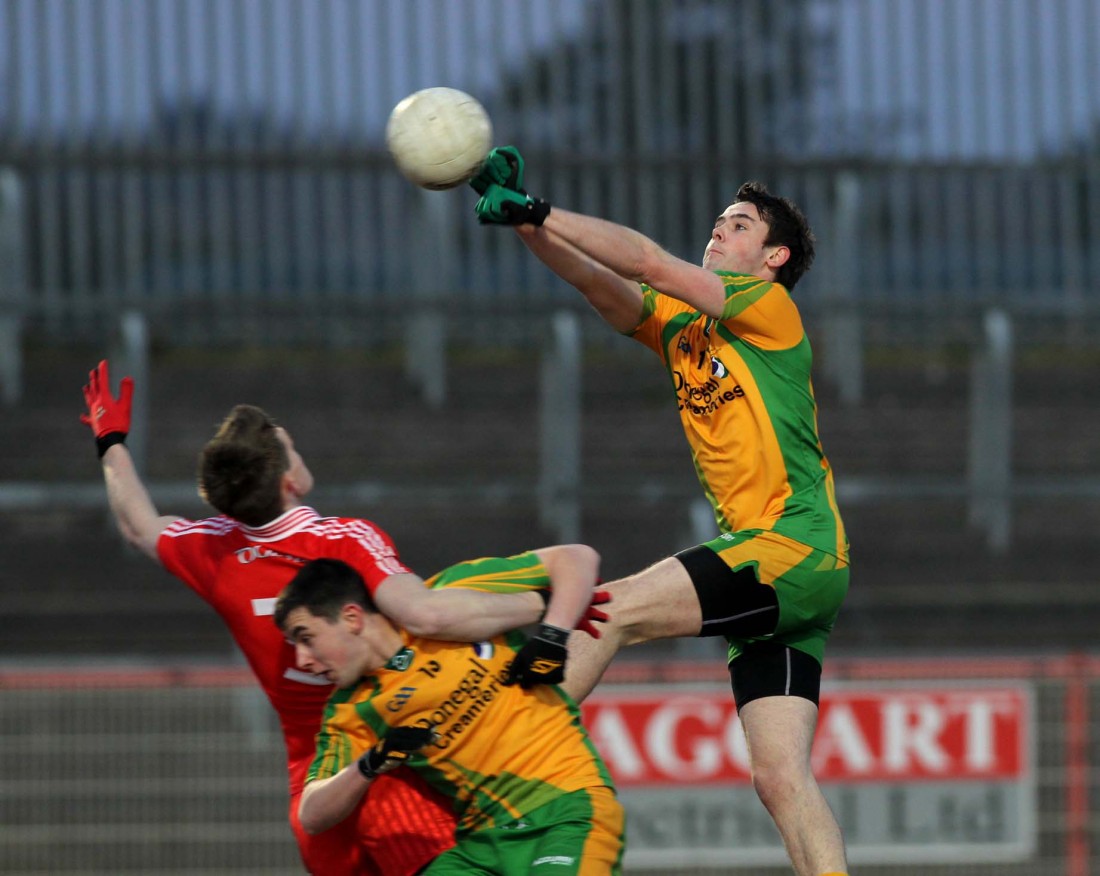 BY CHRIS MCNULTY IN OMAGH

MAXI Curran headed to the Donegal dressing room at half-time on Wednesday night in the Ulster U21 semi and put it on the line to his players.

An Odhrán MacNiallais goal had helped put Donegal into a commanding position, but the didn’t score for a fifteen minute spell as Derry were allowed tag on five-in-a-row. That meant that a Patrick McBrearty score drew partity before the break when Donegal might well have built on their early promise to kill off the challenge.

“He let us know that we weren’t at our best,” MacNiallais, mildly, put it.

“We put on a good show, but we fell away again. You need your luck and we got it tonight. Thank God we held on.”

Curran put it more bluntly when he had addressed his group.

“We just told them to keep doing what they were doing if they wanted their season to end,” the Downings man said after the game.

“They needed the performance of their lives and we just asked them if that first half was all they wanted to do. We told them that the Ulster final was there for them if they wanted it.”

Curran was a member of the backroom team in 2010 when Jim McGuinness’ crop stormed through the door to claim an Ulster title before reaching an All-Ireland final later that year.

“We’re delighted to get over the line,” he said.

“Derry spoke a lot about our defensive system and how they were going to break it down.

“When we actually came out and played at the start of the second half they weren’t expecting it and we managed to get scores on the board.”

Caolan Ward’s goal at the outset of part two was described by Curran as being a ‘real confidence lifter’.

MacNiallais had earlier given Donegal a base when he goaled in the ninth minute. “I fired the ball into Paddy (McBrearty) and I actually thought he’d put it over, but when I saw it falling and the ‘keeper caught in two minds I just went for it,” said the Gaoth Dobhair starlert.

After the blistering start to the second period, Donegal let Derry back in. The door could have been bolted, but as it had been left ajar Derry were always within a strike of swinging the pendulum.
“For some unknown reason when we got so far ahead the team seemed to just recoil into their

“Time after time that can come back to bite you.

“Fellas were sagging. The biggest problem for us was a serious loss of shape. At one stage in the second half we had Conor Gibbons back marking Aaron Devlin, their full-forward. Both teams had so many changes through the game.

“Numbers meant nothing and it was hard to figure out. You were telling a man to go on and you just had to tell him who to mark rather than where to play.”

Donegal came under stern pressure, but managed to hold out with some heart-in-mouth defending late on.

“They threw everything at us. I don’t know if we dealt with it well or not, but we held on,” said MacNiallais.

“The result is the main thing. Hopefully we can carry the form into the final. We were excellent against Tyrone and while we weren’t as good tonight we still won so hopefully we can build on that now.”

MacNiallais has been in and around the Donegal senior set-up for a while now and is very highly-rated by the management. He was one of the many Under 21s to benefit from playing in the Dr McKenna Cup.

The forward said: “It was great for us. Most other teams are coming here with no competitive games played. We had three good games in January and then had six weeks training. Our preparation couldn’t have been better.”

Now, then, for Cavan, the kingpins of this grade in Ulster. The Breffni county will be the raging-hot favourites, but it’s a game that Donegal will enter with confidence fairly high in their own minds.

Curran said: “Cavan will be massive favourites. They have won the last two and they gave Down a hammering. They have a serious breeding ground at under 21 level.

“We will try to figure out where Derry caused us problems and why because Cavan will be a huge step up.”

Donegal will have the knock that forced Ciaran Cannon to go off injured in the 42nd minute assessed before the game, but there was confidence expressed by mentors that the Letterkenny Gaels man would be ok.