By Cronan Scanlon
IF HAVING an Olympic gold medalist from the area wasn’t good enough for the people of Castlefinn, it has also emerged they now have their very own Grand National winner.

Last month the Donegal News revealed for the first-time that Castlefinn native William John ‘Bill’ Carr was a member of the USA 8s rowing team that took gold at the 1900 Paris Olympics.

This week we can reveal that the winner of the 1924 Aintree Grand National, ‘Master Robert’, was born, bread and trained just a few miles outside the border town.

He was bread by Mr Robert McKinlay on his farm at Sessiaghmore, on the back road between Castlefinn and Convoy.

Speaking from his home this week, his grandson, Mr Terence McKinlay, said the horse was also used to plough the family farm while his father, Alexander, was away fighting in World War I.

Terence said his father was killed in a horse riding accident nearby four months before he was born.

Hanging proudly in the McKinlay family home is a picture of Trudgill on the ‘towering chestnut.’

When the foal was born he was an “enormous size” and, when he was two years-old, he was sent to The Curragh to be trained by Mr Maurice Reidy.

However, Mr Reidy wrote to Mr McKinlay to tell that the horse was “too much overgrown” and although fast, he could not compete with the other horses of the same age.

Mr Reidy advised that the horse be taken back to Castlefinn and to make a “chaser of him.”

As Mr McKinlay was away all the time and his son Alexander was away fighting in the war in France, there was no on around to properly exercise him, so he was used to plough the fields.

Master Robert was trained as a ‘chaser’ by a Mr Anthony in 1919, however, he was returned to Mr McKinlay again as he was deemed to be “no good.”

He also refused to work in chains on the farm and was subsequently sold to Mr JT Elliott of Strabane for £50.

Mr Elliott kept him for around six weeks and, part of that time, he was at grass in a field next to the Donegal Railway line.

“One day, when a train was passing, he took fright, jumped the gates on to the line and galloped along the railway track for about two miles in front of the engine,” Mr McKinlay said.

Mr Elliott then sold the horse on to a Mr Laverty in Dungannon, County Tyrone, who later sold him on to Mr Pat Rodgers in Ratoath, County Meath.

Mr Rodgers used the horse for hunting before he sold the him on to Mr HJ Fordham of Royston, Hertfordshire in England in October, 1921.

Mr Fordham won a number of races with him before selling him on to Major Sidney Green and Lord Airlie and the rest, as they say, is history.

The McKinlay farm was purchased by Mr Seamus Dolan and his wife Maureen in 1982.
According to Mr Dolan, the story of Master Robert was common knowledge locally “years ago”. 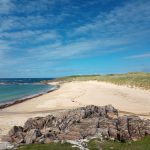 Today expected to be the hottest day of the year