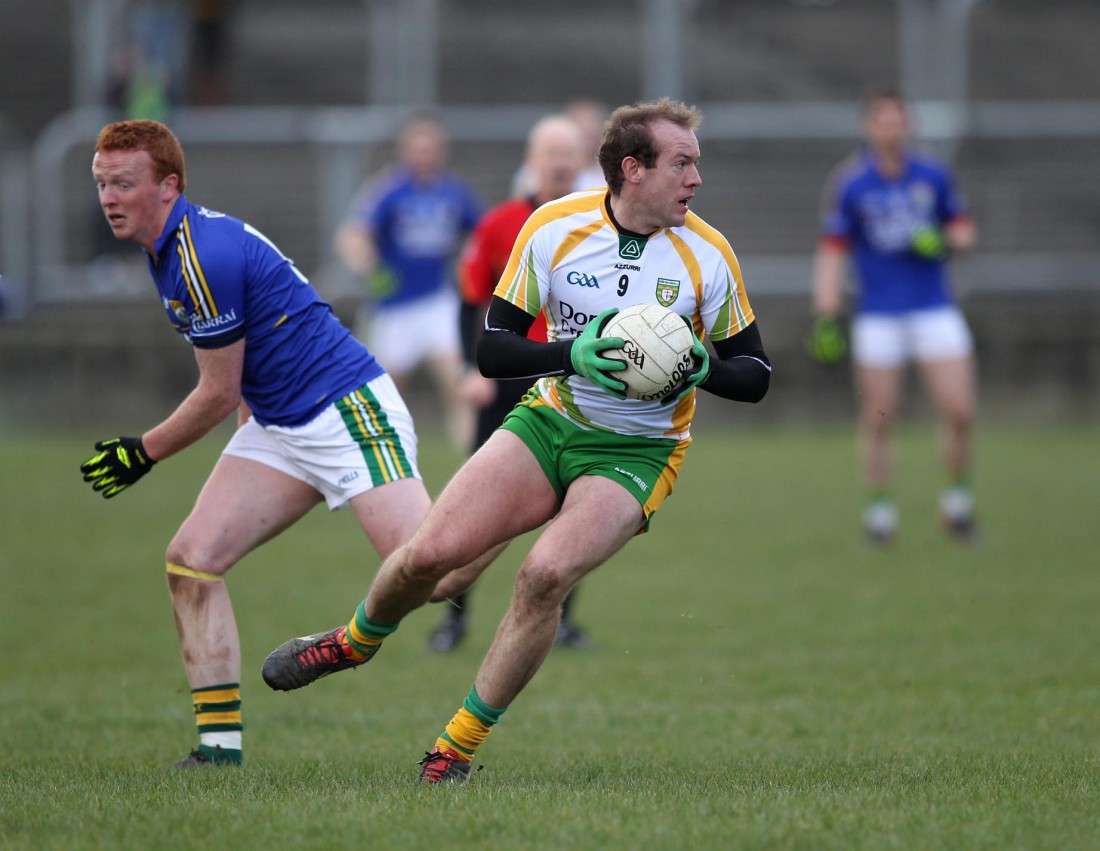 JIM McGuinness is hoping to add a significant boost to Donegal training this week, when he expects to see a handful of stellar names back in training again.

With just six weeks to go now until they meet Tyrone in the opening round of the Ulster Championship on May 26th, McGuinness has now undergone two weeks of ‘Championship training’.

The squad was in Rossnowlagh on Saturday where they got another intensive session under their belt.

McGuinness had some injury problems during a National League that saw his team relegated to Division 2, but the Glenties native is now seeing light at the end of that particular tunnel.

Indeed, the Donegal manager believes that he will see a return to full training this week by Karl Lacey, Neil Gallagher, Neil McGee, Paddy McGrath and David Walsh.

“I would hope that all five would be back in the group, hopefully on Tuesday night,” McGuinness told the Donegal News.

“To think that we were minus those players and still nearly survived in Division 1 is a positive in terms of where this squad has come to.

Lacey (hip) and Walsh (shoulder) have not kicked a competitive ball this year. Lacey was back among the Donegal training two weeks ago in Castlefin and the 2012 Footballer of the Year is now edging closer to a return to full-tilt action, while Walsh is also nearing a return.

McGuinness said: “Karl is on a running programme and we’d be hoping now to get him back and get a few good weeks of training behind him now.

“David has been on a very good rehab programme on his shoulder and he’s almost ready to come back fully too.”

McGrath, McGee and Gallagher all picked up knocks during the League, but the news on all three is positive.

McGuinness said: “Neil McGee got injured in Mayo and has been progressing well; Neil Gallagher has had two weeks off, we just felt it was best to leave him to get 100 per cent right; and Paddy McGrath was back jogging on Thursday night.”

McGuinness and his assistant manager, Rory Gallagher, were in Croke Park yesterday to see the National League semi-finals.

The Donnellys, Matthew and Mark, each found the net as Donegal’s Championship opponents, Tyrone, defeated Kildare 2-15 to 2-11, while Paul Mannion and Jason Whelan netted for Dublin, who beat Mayo 2-13 to 0-13.

Meanwhile, as five of his regular featuring players come back, it has emerged that another handful have departed the county senior panel.

Mark McGowan, Shane McGowan, Thomas McKinley, Antoin McFadden and Peter McGee have left the panel, but will remain on the manager’s radar and will continue to play in A versus B games held by the management.