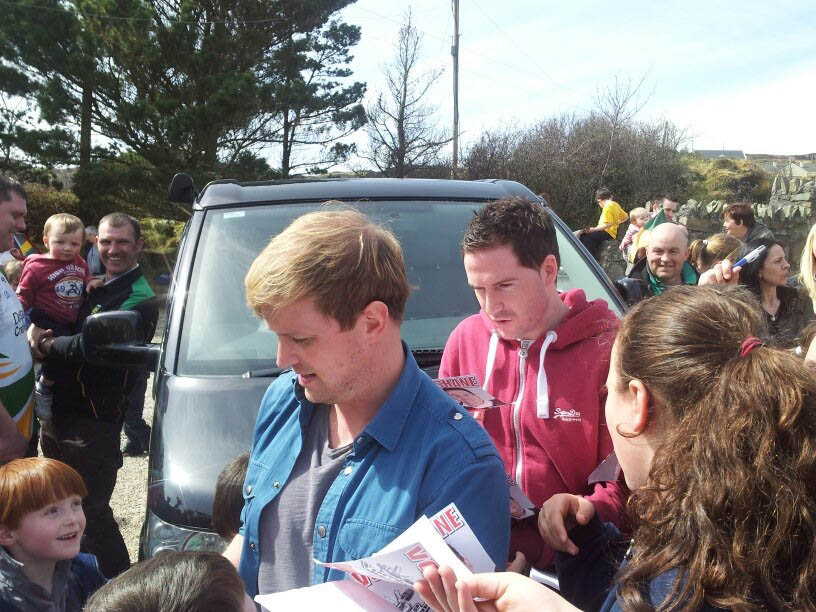 Shane and Kian signing autographs during a visit to Shane’s home in Downings this week.

BY SEÁN P. FEENY
EIGHT months ago a young Downings man decided he wanted to give the music industry one last shot before calling time on his bid to make it.

This Sunday night Shane McLaughlin (28) will take to the stage of this year’s final The Voice Of Ireland with the three other remaining contestants.

Shane was the lead singer of well-known local band Red Light Inferno which was due call it a day to emigration and other unforeseen circumstances.

Last November the singer decided he would audition for Season 2 of the RTÉ talent programme and with a performance of the Frames hit Fake bagged himself a coach, former Westlife star Kian Egan, during the blind auditions.

Shane was one of three Donegal contestants to make through the blind auditions, including Fahan’s Roisin Carlin and Carndonagh’s Mark McLaughlin.

Following the sad exit of Roisin on Easter Sunday, it was down to Shane to keep the Donegal flag flying as he faced hit toughest task yet.

Shane had to compete with his team mate, popular contestant Kelly Mongan, for the public vote. But although she received the higher vote on Team Kian, Shane received a ‘lifeline’ when he had the highest votes amongst the remaining contestants to make the final 10.

The Downings man had received a lot of harsh criticism throughout the competition from some members of the judging panel and battling with glandular fever he took to the stage to perform Valerie and defied his critics to make the semi final.
Last Sunday night Shane gave what was described has his best performance of the season when he belted out the Def Leppard hit Pour Some Sugar On Me.

It was a performance that would earn him a place in the final as he once again beat very stiff opposition and rightly be named a ‘dark horse’ of the competition.

Now it’s down to his native county to get behind him to overcome that final hurdle. So tune in this Sunday, 6.30pm, on RTÉ One, and vote for Shane McLaughlin to make him The Voice Of Ireland. See Pages 36-37 for further coverage.