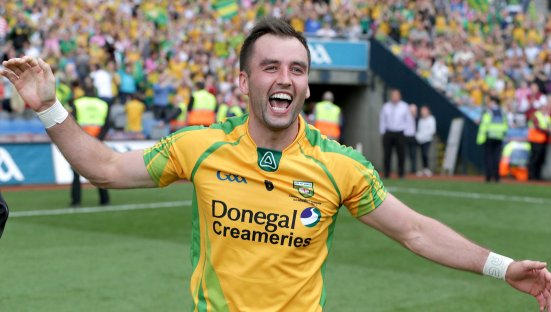 DONEGAL received a timely boost on Tuesday night in Castlefin when the 2012 Footballer of the Year, Karl Lacey, reported for training, four months after going under the knife to correct a hip injury.

The Four Masters man had been working on his own over the past two to three weeks, but on Tuesday night the quadrouple All-Star winner was back in the groove again.

Significantly, Tuesday was the night when Jim McGuinness said he was going to ‘push the button’ for Donegal’s Championship training, just over seven weeks out from when they go into battle against Tyrone.

Lacey has not played since he was forced off at half-time during Four Masters’ Donegal SFC semi-final defeat to Naomh Conaill in October, but the Donegal town man, who is now based in Dublin with Ulster Bank, is well on the mend again.

“Karl was home on Tuesday night and was out on the pitch with us,” the Donegal assistant manager, Rory Gallagher, confirmed yesterday afternoon.

“He was moving really well and the signs are very positive for Karl at the moment. He has plenty of time now to up the ante on the fitness ahead of the Tyrone game. He’s naturally very fit anyway and we have no fears about Karl.

“He was running at full pelt, pain free, on Tuesday night. Once he gets some twisting and turning done now we will integrate him back into the full sessions again and we’d expect that to be done within the next fortnight.”

David Walsh is also expected to return to full-contact training in the next week to ten days following a lengthy absence with a shoulder injury.

This weekend’s crunch final game in the National Football League against Dublin in Ballybofey will come too soon for the duo, however. Full-back Neil McGee misses out due to a knee injury sustained in the defeat to Mayo, while Paddy McGrath (quad) and Neil Gallagher (groin) will also be missing from action on Sunday.

Gallagher was to have a scan on his injury yesterday.

“The Championship is not too far away now so we will not be rushing or risking anyone at this stage,” Rory Gallagher said.

Eamon McGee will fill in for his brother at full-back, while Ryan Bradley will get the nod to partner Rory Kavanagh at centrefield with Frank McGlynn stepping back into corner-back in place of McGrath.