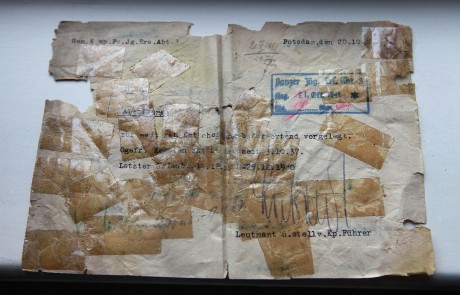 BY KATE HEANEY
A PLASTERER who worked in the former Gestapo Headquarters in Potsdam, Germany, discovered a telegram under the floorboards during renovation works there.

Liam McDaid from Carndonagh has decided to place the unique telegram on eBay which is sure to attract huge attention from World War Two collectors.

Speaking to the Donegal News this week Liam explained how he and a group of construction workers were renovating the former Gestapo Headquarters shortly after the fall of the Berlin Wall on 1989. The building was to become the Bundesbank.

“When we lifted the floorboards we found lots of stuff the Gestapo had hidden there when they fled. The telegram is dated January 20, 1941 and it is from a members of the Panzer division of the army looking to take leave.

“One colleagues I worked with found two letters signed by Adolph Hitler but I don’t know what he did with them. I spent hours carefully taping this telegram back together and I have kept it safe since. Now I feel it is time to offer it for sale on eBay to see what the interest is like. It is such a unique thing.

“I did some research on the lieutenant involved and discovered that he was believed to be suffering from tuberculosis. If he was waiting for the end of the war to be able to get his leave, I don’t think he would have lasted that long,” Liam added.