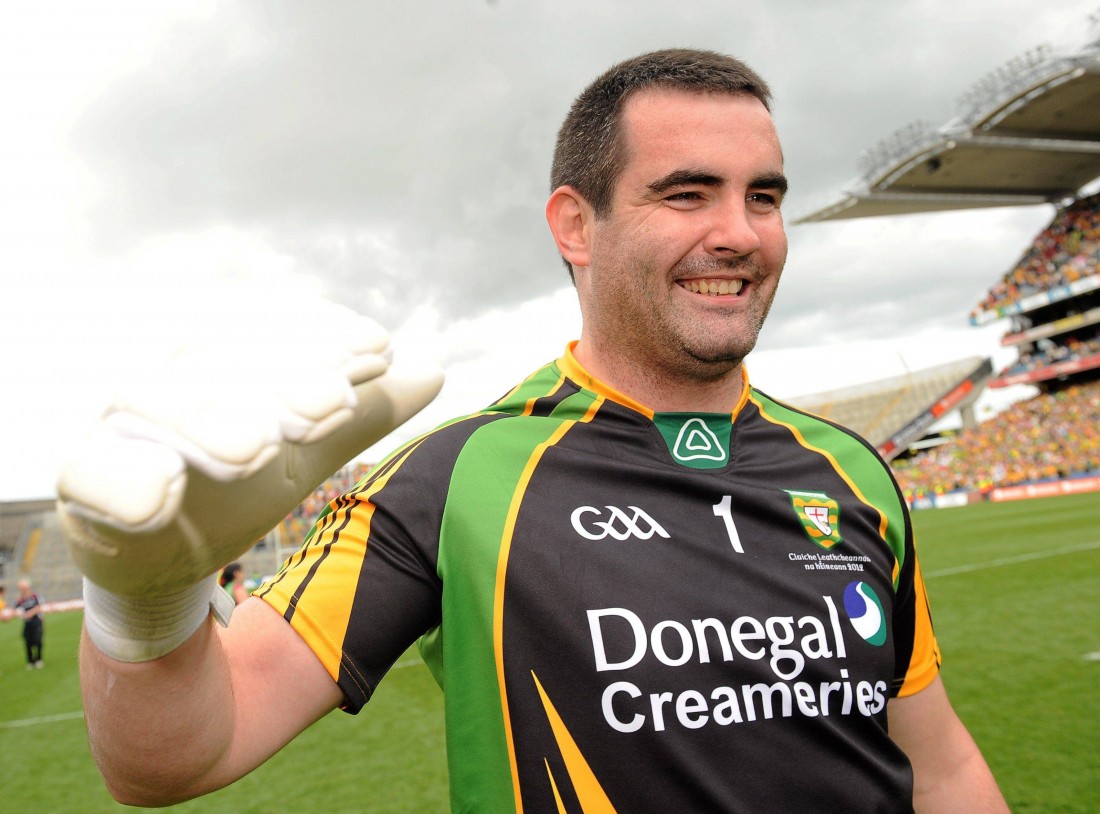 Paul Durcan, who will make his 100th Donegal appearance on Sunday.

PAT Shovelin is better placed than most to talk about Paul Durcan.

The Ardara man has been the Donegal goalkeeping coach for three seasons now and has seen the Four Masters man develop into an All-Star ‘keeper.

As Durcan prepares for his 100th Donegal game this Sunday in Omagh, Shovelin says that the big Donegal town man has become one of the big players in the squad.

“I would liken his to the influence that Peter Schmeichel (the former Manchester United goalkeeper) used to have,” says Shovelin.

“He is a massive voice in the dressing room and a massive influence in the squad.

“Like Schmeichel used to, Paul can really control games. He is so good with his team-mates too, whether it’s a senior player or a youngster.”

Shovelin began working with Durcan and Michael Boyle in the winter of 2010 following McGuinness’s appointment.

“I must say it was pretty daunting at the very start,” Shovelin says, “but Paul has been an absolute gentleman.

“He has been putting in tremendous shifts in the last two years for us.

“He is so important because there is such an emphasis on goalkeepers now. Paul has really flourished and the three of us work well as a team.”

Durcan heads to Omagh on Sunday looking for a second clean sheet of the year following his shut out against Down last time out in Ballybofey.

On the opening night, the glare of Croke Park’s lights caught him and Johnny Doyle struck a strange second goal for Kildare who won the opening game of the NFL campaign.

“In this position people remember the mistakes rather than the things you do good,” says Durcan.

“You just have to get on with it, though, and try to put them behind you.

“I got caught against Kildare, but I kept a clean sheet against Down. That was very important for me and for the team.

“You do, in a way, beat yourself up about things like that. The big thing is that you get back in training and get it into your head that you have to put it behind you.

“It’s a tough pill, but sometimes you just have to swallow it.”

“That save against Tyrone was important because it was the last kick of the game. That’s why people remember it.

“In fairness we were three up, but even it had gone in I would have been fairly confident for a replay.

“In fairness, though, down the line we could have been stunted then if we’d had an extra game to play.”

When Donegal were well ahead against Kerry and Cork in the All-Ireland quarter and semi finals they were pinned back with goals by Kieran Donaghey and Colm O’Neill.

Those are memories that still make Durcan wince.

He says: “Those were things that, as a team, we were disappointed with. We took the foot off the pedal. We’ll learn from them though.

“The Cork one was the worst. We pride ourselves in dealing with long balls and that was so disappointing. We’ll do work on that this year.”

Eleven years ago the Donegal town man has a brief spell as substitute goalkeeper at Finn Harps.

The All-Star cannot pin point what first made him don the gloves. He says: “I have no real memory of what put me in first. My brothers used to put me in! I improved as I got older and I used to love it.”

The stakes are being raised all the time and, as Shovelin says, their influence is continuously on the up, too.

Durcan agrees: “There are so many good goalkeepers about. (Stephen) Cluxton set the bar and then you have the likes of David Clarke who has really worked on improving his game.”

Durcan pays a huge compliment to Shovelin and also his understudy, Boyle, who he says has been a great motivator. Boyle had spells in the team in 2005 and again in 2009 but Durcan is now firmly number 1.

He says: “It’s unbelievable to have a ‘keeper like Michael pushing you on. He is a quality goalkeeper as he has shown. It’s great to have the two boys, Michael and Pat Shovelin, pushing it in training.”

As he looks back on his previous 99 games, there is no doubting the highlight – and he sees plenty of reasons for optimism.

He says: “The All-Ireland final is the pinnacle. There were a lot of years that didn’t go so well.

“That has changed over the last two years since Jim has come on board.