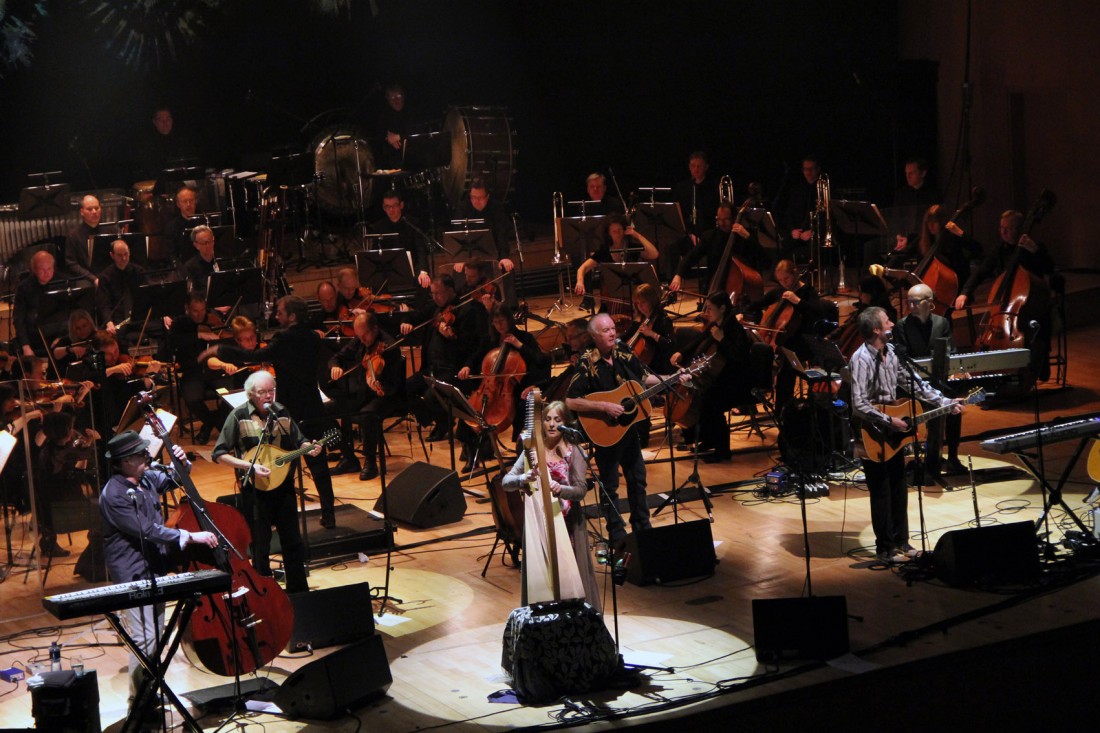 Clannad perform with the Ulster Orchestra at the Waterfront Hall in Belfast on St Patrick’s Day.

BY SEÁN P. FEENY
ON Saturday night one of Donegal’s most famous musical exports brought a busy six months to a close with the final concert of their most recent tour.

Clannad performed the last date of their UK Tour in Guildford having performed all over Europe and North America since the full five-piece got back together for the tour.

Since all members, Moya, Ciarán, Pól, Pádraig and Noel got together to celebrate 40 years with a series of concert at Christchurch Cathedral in Dublin during the Temple Bar Tradfest two years ago the band has been in demand more than ever.

This has also inspired Ciarán and Pól to start writing together again and fans are eagerly awaiting a new release from the band.

Moya said the band hasn’t stopped since setting off on their North American tour last September. “After touring in Canada and America with Clannad, Cormac (de Barra) and I did some extra dates in America during the month of November.

“Then I had the Christmas tour before we set on our European tour on January 14. We performed in twelve different countries, including Norway, Italy, France and Germany.”

After their European tour closed Moya and her musical director, Cormac de Barra, went into the studio to complete their second Voices & Harps album.

“We have just finished the album and we are holding the third Voices & Harps weekend in June and the album will be launched as part of it,” said Moya.

On Saturday night Clannad played their last gig of the UK Tour in Guildford. During the tour the band also jetted back to Belfast for a very special St Patrick’s Day concert.

The band performed with the Ulster Orchestra at the Waterfront where special guests included Leo and Baba Brennan in the audience, while on stage Duke Special joined Clannad to perform their classic hit, In A Lifetime.

The song was of course first recorded by the band with U2 frontman Bono and later was also recorded by Brian Kennedy with Clannad.
Moya said: “Brian, who was with us for the whole UK tour, couldn’t make the Belfast concert, so it was wonderful to have Duke Special there who really put his own stamp on the song. It’s nice when you give a song your own personal touch and Duke really floored me with his version.”

One of the big events for Moya this summer will be the launch of her second Voices & Harps album with Cormac during the third annual Voices & Harps weekend on June 20.

Last night Moya also launched her new CluBeo at Leo’s Tavern, Meenaleck, a new monthly event giving people a new platform to perform.
“This isn’t just an event for people out in the West, it would be great to see people from all over Donegal and further afield come to perform.

“It’s all about creating a vibe and sharing songs. It’s also not just going to be a night for more established people. This is a good opportunity for young people to get up and gain a bit of experience on stage, singing a cover or even trying out their own material.

“I am full of confidence that this is going to be a great monthly event, in the spirit of some of those famous Dublin singer nights that gave a platform to the likes of Mundy, Glen Hansard, Damien Rice, Damien Dempsey and many more.

“It’s going to be a spontaneous event, with different collaborations and lots of singers and hopefully we can build CluBeo’s reputation and we’ll see where we can take it.”