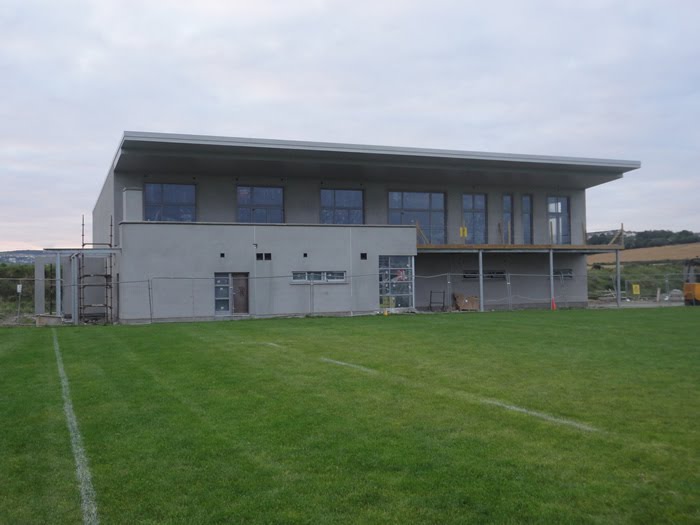 Letterkenny Gaels’ new clubhouse – the club has not ruled out the possibility of revisiting the boundaries debate at county committee level.

WHILE a landmark ruling of the Disputes Resolution Authority (DRA) this week decreed that Letterkenny would remain ‘open’ for Gaelic Games purposes, the Letterkenny Gaels club has not dismissed the possibility of re-opening the book at Donegal county committee level.

On Tuesday, it emerged that the DRA, the ultimate arbitrary body for GAA disputes, had ruled in favour of St Eunan’s and determined that there be no boundaries in Letterkenny.

This has been a long-standing row and a divisive topic among GAA people in the town since the Gaels first sought to have the parish of Aughaninshin set as their club’s catchment area.

The St Eunan’s club, all the while, has been insistent that there is an agreement in place between the clubs since the foundation of the Gaels club in 1996 that there would not be a divide drawn in the town.

It is an issue that has raged and burned long into the night at several sittings of both county committee meetings and indeed the 2009 County Convention, which ran on until the following July deliberating on the matter.

In November 2011, a meeting of the county committee was asked to vote on ‘whether there is an agreement in relation to boundaries between both clubs’. Delegates voted 40-36 that there was no agreement, with the consequence at the time said to have effectively granted the Gaels ownership of the Aughaninshin parish.

However, this was disputed by St Eunan’s and the Ulster Hearings Committee upheld their appeal – a decision that was vindicated this week by the DRA.

“There was evidence and information before the (Ulster Hearings Committee) such as entitled it to come to the decision it made and in those circumstances the Tribunal does not feel it can look behind that decision,” read the findings of the DRA.

The DRA also determined that the effect of the vote from November 2011 was NOT to confirm Aughaninshin as the catchment area for the Letterkenny Gaels club, rather it was to decide whether there had been an agreement or not.

While this appears to give rise to the possibility of Letterkenny Gaels bringing the matter before the county committee again, the club would now require a significant swell in support.

As the Ulster Hearings Committee found that ‘there had been an agreement on boundaries in 1996’ the Gaels would need a two thirds majority to overthrow that decision – needing 55 votes based on the number (82) of votes cast at the November 2011 sitting.

“We must take time to reflect on the decision now before we can make any other comment or consider if there is any other action that we can take,” a Letterkenny Gaels spokesman said this week.