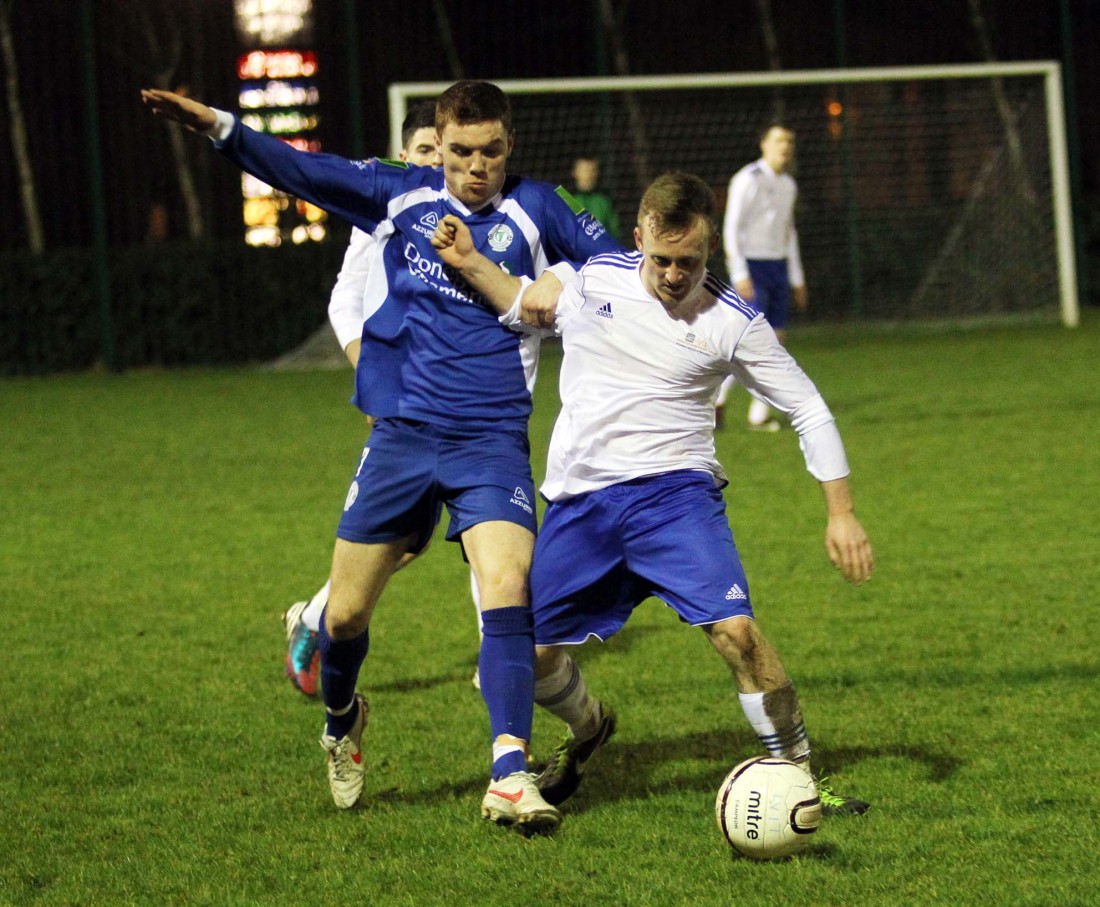 By Aidan O’Donnell at Finn Park

FINN Harps showed a ruthless edge as they systematically dismantled a weary Cobh Ramblers in their opening home game of the season at Finn Park on Friday night.

The Cork side, who made the 270-mile trip to the northwest in a convoy of cars just hours before the game, were struck down in the opening seven minutes as Sean McCarron and Kevin McHugh gave the hosts an early two-goal lead.

Cobh, back in the League of Ireland after a four-year absence, pulled one back midway through the first-half through Conor Meade, but Harps almost immediately re-established their two-goal cushion when McCarron headed home his second in three games.

The striker was handed a starting berth alongside McHugh following his goal-scoring cameo off the bench in last week’s impressive 1-1 draw at Waterford United.

And although he limped off early in the second half with an ankle injury, Harps continued to exert an attacking threat. Peter Hutton’s side passed up a whole host of chances to make the game safe before McHugh grabbed his second of the night two minutes from time.

McCarron was one of two players called into the starting line-up from the side that started at the RSC last week, with Paul McVeigh also coming into the fray in the absence of the suspended Thomas McBride. Aaron O’Hagan dropped to the bench but was called upon early in the second half to replace the withdrawn McCarron.

Cobh, unsurprisingly, showed no alterations to the side that ripped Wexford Youths apart last week. Dave Hill’s side made a devastating impact on their return to the league as they romped to a comprehensive 5-0 win in their first Airtricity League game since 2008.
However, they were brought firmly back down to earth with a bang as Hutton’s side underlined their promotion credentials with an impressively measured performance.

Harps – who were somewhat unlucky not to take all three points against Waterford after McHugh’s last-minute free clipped the outside of the post – began where they left off in the south-east with a lightning-fast start in Ballybofey.

McHugh was the architect as he dropped deep before releasing Marc Brolly down the inside left channel.

The Strabane man, back at Finn Park after a year away, dinked over the onrushing ‘keeper and although centre-half Gary Collins was positioned perfectly to clear off the line, the ball only fell as far as McCarron who slammed home from six yards to mark his Finn Park bow in some style.

The Derry man had the ball in the back of the net again a minute later but saw his effort ruled out offside. But before the crowd could catch their breath Harps once again exploited the nervous Cobh rearguard as McHugh dispossessed Ian Long before racing into the box and coolly slotting under the body of goalkeeper Robert Birdsall.

Former Limerick player Andrew Bhandarkar tried to haul his side back into the game but his ambitious long-range effort failed to test Harps netminder Ciaran Gallagher.

McCarron continued to cause the Cobh defence, and in particular Brian Fitzgerald, no end of problems with his weaving runs and quick feet. The front-man outmuscled Fitzgerald on one occasion before drifting in off the left and laying off unselfishly to McVeigh when he would’ve been well within his right to pull the trigger himself.

Harps, though, would momentarily pay for a period of sloppiness in which they allowed their counterparts a pathway back into the game.

Deady was proving their most dangerous weapon down the left side and from one such foray down the flank he carved out their solitary goal of the game. Having latched onto a cushioned pass from Bhandarkar, Deady found Conor Meade unmarked at the back post.

The Cobh striker, who grabbed two last week, had time to control the cross before nonchalantly lifting over Gallagher into the far corner.

But if Hutton was annoyed with the manner in which his side conceded he would’ve been pleasantly satisfied with their swift response.

Marc Brolly saw his initial corner come back his way and from his second delivery, McCarron climbed high to flash a header beyond Birdsall.

Both sides fashioned half-chances near the end of the half, with Gallagher quick off his line to deny Alan O’Flynn following a cutback from Collins, while McVeigh stung the palms of Birdsall with a ferocious drive right on the whistle.

The home side, while not as clinical in front of goal as they were in the first half, outworked their opponents and never allowed them to pose any sort of a threat to Gallagher’s goal.

Michael Funston was much more involved in the final third after being moved out wide right following Aaron O’Hagan’s introduction early in the second period.
He teed up fellow midfielder Shaun McGowan, who thundered a bullet over the bar from the edge of the area before then passing up two golden opportunities himself.

Brolly found him at the back post but he failed to keep his downward half-volley on target and moments later was denied by a point-blank save by Birdsall following a through-ball by McHugh.

McHugh, the joint-top scorer in the First Division last season, had the final say when he headed home from a Funston delivery two minutes from the end as Harps laid down a real marker of intent.