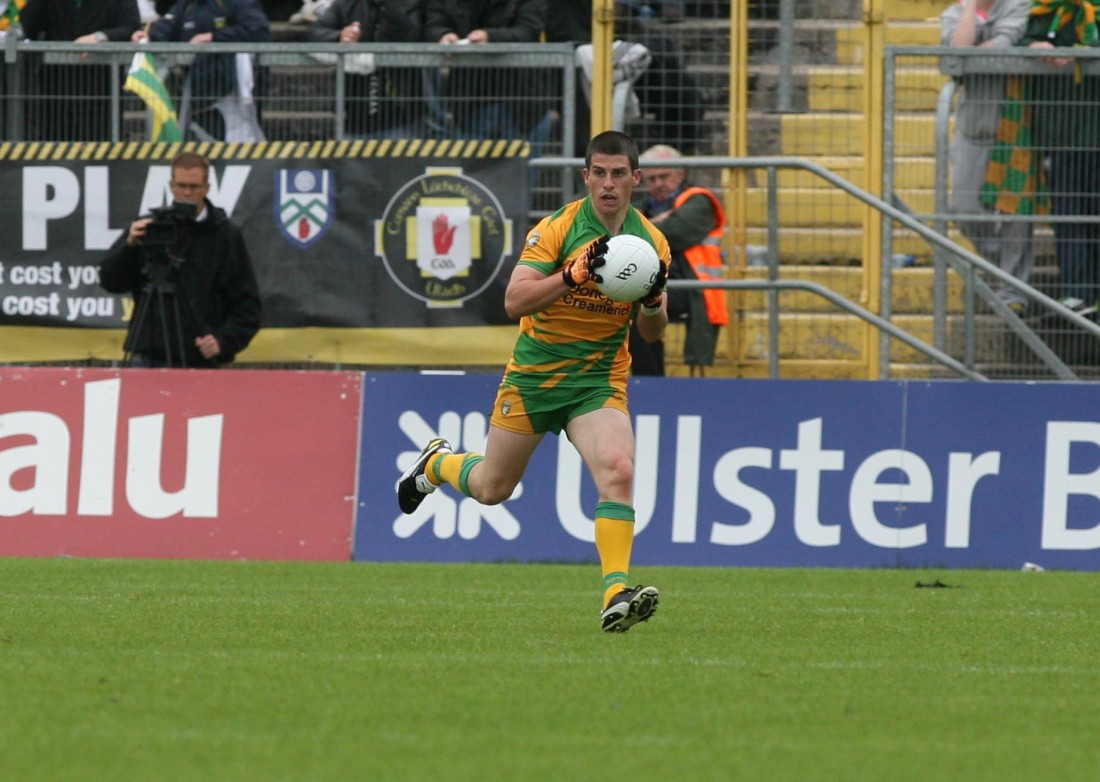 JIM McGuinness took a glance at an old photograph from his days at St Conall’s National School in Glenties recently – and came to a startling conclusion.

“I think I’m the only person from my primary school class photo who is in the country – and I’m not in the country every day of the week either,” said McGuinness, who now spends a couple of days a week in Glasgow, where he works as a Performance Consultant for Celtic FC.

Clubs the country wide have been feeling emigration’s cold finger tapping them on the shoulders for some time now. McGuinness himself spent some summers in America during his younger days. In recent years, though, there has been a growing trend in the number of youngsters who take to the skies for pastures new not knowing when, if ever, they’ll reside at home again.

“When you sit down and look at it in that way, it’s worrying,” said McGuinness.

“It’s a sign of the times when you hear about clubs – like Dungloe and Na Rossa, my own to neighbouring clubs – amalgamating. My own club (Naomh Conaill, Glenties) have been successful over the last few years, but we have lost players to Australia and America. It’s a very difficult time for all the clubs around the country.

At the 2012 Donegal County Convention in Donegal town, the Co Secretary, Aodh Mairtín Ó Fearraigh, delivered in his annual report some startling facts and figures.

In the last three years, 135 players have departed Donegal on sanctions or J1 visas for the summer months; 241 players, meanwhile, have transferred to clubs outside of Donegal.

In 2012, 79 players transferred out of this county with March, April and May seeing the highest number of outgoings.

“Donegal has been hit hard with emigration in recent years and this is reflective in the figures regarding players obtaining transfers,” the secretary said in his report.

“While clubs are sorry to lose players, it’s a comforting fact for clubs, players and their families that they will be welcomed with open arms by another unit of our Association in another part of the world. These clubs are being enriched by players that leave our shores on a daily basis…As officials, we will be doing what we can to keep players at home, but jobs are disappearing rather than appearing.”

PADDY McGrath made one of life’s toughest decisions when, in the autumn of 2010, the young Ardara man turned down the offer of a full-time job as an assistant site manager with a contractor in Liverpool.
He’d been on work placement in Liverpool and was being flown back by the Donegal County Board to play for the Donegal Under 21s. When their season ended, the Ardara club paid his way over and back.

It was a reasonable scenario, but for a player who had eyes to the ladder’s top rung it was neither ideal nor possible continue. Around the same time as he was offered the post in Liverpool, Jim McGuinness had taken the reigns of the Donegal senior football team.

“I just stuck around really to see what would happen, because I knew that Jim could take the team somewhere,” McGrath said this week.

Door-to-door, he’d have made Liverpool to Ardara in five hours. It would eventually take its toll.
“They flew me over all the time and it wasn’t too stressful. I was training away over in Liverpool but it wouldn’t have been collective stuff, mainly just running on roads.

“I finished up in August and I couldn’t keep it up. At this level you need to be training during the week properly. The option was there for me to go back to Liverpool and they asked me if I wanted a job after I was finished college.”

McGrath mentions notably that ‘football doesn’t put bread on the table’ (‘a pity it wouldn’t), but he’s now working with Adrian Brennan in his garage in Ardara. Having studied construction Galway and then completed the placement in Liverpool, he could have walked into a job.

He said: “I’d be a homebird anyway. You hear about all these boys who are away enjoying the good life and making loads of money, but it all depends on your own situation.”

GRÁINNE Houston won an All-Ireland ladies title with Donegal in 2010, but these days is teaching in a primary school in the exotic climbs of the United Arab Emirates capital city, Abu Dhabi.

The 24-year old Glenfin woman graduated with a degree in primary teaching in 2010. Aside from some ‘subbing’ posts in Dublin, she found work impossible to come by – and so the UAE became a possibility.
“I moved out here because I had finished up in Dublin and a good friend who I had lived with in Dublin was coming out here,” she said.

She has been in Abu Dhabi since October.

“I just thought I’d give it a shot. There was nothing at home for me, so I sort of had to do something. The wages were good here, so that was a draw and then there are the obvious perks in Abu Dhabi on top of that!”

On Wednesday it was 35 degrees in Abu Dhabi. In Glenfin, it was 2 degrees.

In 2011 she won the senior championship with Glenfin, but the football at home has had to be put aside – though she does hope to play in the summer when she returns during the holidays. And she hasn’t completely lost out. She turns out for Na Fianna in the UAE and has had a fair degree of success.

“There is Gaelic football out here and we’ve won every tournament we’ve been in so far. The Gaelic Gulf Games are on this week so there are teams coming from all over. I do the same school term out here, so you never know I might get to play Championship when I come home in the summer.”

There remains a wrench to have left Donegal behind.

“There are loads of jobs, so I couldn’t turn it down,” she said, “but I do miss playing for the county and it’s tough thinking that I’ll miss two or three years of it.”

THE decline of the rural club has become a modern day GAA cliché, but for Na Rossa it is a very real scenario.

Corr Point is a small townland in Lettermacaward and in the last few years a staggering NINE young men – all players with Na Rossa’s adult team – have left for foreign clubs.

Brian and John Joe Breslin, Mark, Ryan and Kevin McCready, Ryan and Fionn Hennessey, Gary McMorrow; and David Collins have all left on a jet plane to Australia. Ryan Hennessey has since returned while Ryan McCready and David Collins are now in London. Whether they or the others will ever play for Na Rossa again is questionable.

“Not in the near future, not this season anyway,” says the Na Rossa PRO, Packie McDyre.
“All of those are gone and they only lived maybe four or five houses apart. That is a massive loss for any club let alone a club of our size.

“I would say in the last 24 months that we have lost up to a dozen players.”

McDyre talks of the club being ‘depleted’ and ‘relying on the minors and very, very young players’ now to ‘fill the void’ left by the departures of young men who simply had no choice.
“There was just nothing here and they had to go,” McDyre says.
“We are feeling it right through the club. This year we’re fortunate to have a minor team, an under 16 team and an under 12 team, but we’ve no teams at under 13, under 14 or under 15 level.

“Even at senior level, we have entered a reserve team, but we’re unsure of numbers. Last year we were unable to fulfil a number of games, the numbers just weren’t there.”

It’s a bell that is tolling in several areas. Just when and where the bend will become a break in some parish is the question. The worry is that the answer might not be too far away.

Case study – Tir Chonaill Gaels, London
TOM Mohan, the Chairman of the Tir Chonaill Gaels GAA club in London estimates that he gets ‘around four calls a day now’ from people seeking employment in the English capital.

As the drain of young brains continues, GAA clubs across the globe are reporting unprecedented growths with new clubs sprouting up everywhere. In London alone, Mohan says that there has been a new club affiliated to the London Co Board in the last year, as well as three new ladies clubs.

“Even with ourselves, we’d have taken on board maybe 20 or 30 new players over the last 12 months for our teams and then we’ve had about 15 new girls as well – and we’re only one club out of 40 which gives you an indication of the magnitude of the whole thing from Ireland,” he says.

“We have noticed a significant rise in terms of the constant contact with people ringing looking for work and accommodation. I’d say I’d easily take around four calls a day now from people from all over Ireland seeing if there are any opportunities.”

Eamon McGee, the Donegal defender, returned from a stay in London a couple of years ago, while Ciaran Bonner is another to return to Donegal of late, though Kevin McMenamin from Termon is still a key figure on the Tir Chonaill Gaels senior team that contains many ex-Pats from Donegal.

“There is plenty of work so long as people are flexible. There are a lot of big projects ongoing. The Crossrail project has just started so there is work there with tunnelling.

“Times have changed – people are working for much less money than they would have been. Wages are down maybe 20 to 25 per cent.”