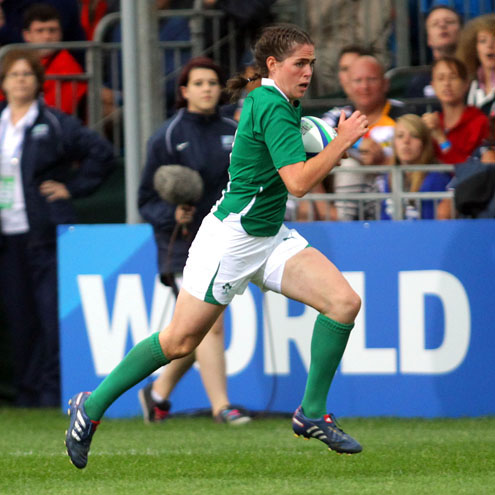 HISTORY knocks for the Irish women’s rugby team – and for two natives of Donegal – this weekend.

It seems almost appropriate that their chance of landing a first-ever Grand Slam should fall on St Patrick’s Day.

The only down side is that their bid to etch a new carving in the history of Irish rugby takes place in the Milanese town of Parabiago in north-west Italy.

The Irish team has taken the 6 Nations by storm this year and it’s already been the campaign to remember: They’re the 6 Nations winners and have bagged a first-ever Triple Crown, helped along the way by a first-ever win over England.

The stepping stones have all been notable from their first win on Welsh soil in eight years to last week’s rousing 15-10 win over France before a crowd of 3,000 in Ashbourne, with the President, Michael D Higgins, among the support.

The Irish half-back line is an all-Donegal combination, with Larissa Muldoon from Cappry, Ballybofey, at scrum-half and Fahan’s Nora Stapleton at out-half.

Their paths here have taken them on very different journeys, but they stand on the verge of capping a truly remarkable campaign in some style by winning a Grand Slam.

“We have surpassed any idea about how we’d get on this year. We knew we’d be better than any other year. It was all about how we’d implement that and now we’ve just gone and won the thing.

The 29-year old is back this year having been out for some time with a back injury. Stapleton only made her Ireland debut in 2010, having only taken up the sport in 2009.

“I was so jealous that people were going off to play this sport that I wasn’t allowed to,” says Stapleton, who was a dab hand at everything from camogie, to soccer, to handball, to basketball, to Gaelic football.

While working for Bank of Ireland, she went to play tag rugby ‘for a bit of craic’ one day in the off-season and such was the way she took to it, a friend asked her if she’d play for Old Belvedere.

Initially she resisted, but sport’s enduring lure soon had her captured and it wasn’t long before Leinster, and Ireland took note.

Muldoon just turned 22 on Monday and is hoping for the perfect end to her birthday week on Sunday by helping Ireland to a slice of history. She, too, was a keen Gaelic footballer and played with Sean MacCumhaills right up to minor level. Around that time, Jonathan Llewellyn was implementing a series of development programmes in Donegal. 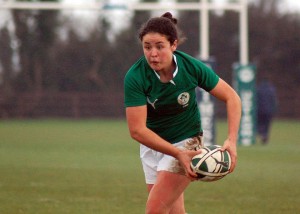 Larissa Muldoon in action for Ireland

“I started playing then for Ulster at under 18 level and I played a bit for the Ulster women’s senior team too,” says the daughter of Vincent and Denise Muldoon.

She only took up the game at 17, but at 19 she won her first cap. A year ealier, she moved to Cardiff where she played for her university team and, so impressed were they, they sent a video back to the IRFU’s base in Dublin. It wasn’t long before she’d wear the green of Ireland.

“It’s huge,” she says of where they stand this week.

“The coverage we have been getting and the increase in it has been rediculous really. Last year, no-one even knew we had a team, but now the whole country knows about us – it’s great.”

Ireland opened their campaign with a 12-10 win over Wales, but it was the following week’s 25-0 beating of England in Ashbourne that saw them really catch fire.

Larissa says: “Wales was a tough one, but once we got over them we had real belief. The win against England gave us massive confidence then. We really believed in ourselves.”

Against England, Alison Miller scored a hat-trick to tee up a Triple Crown date with Scotland.

The English win was the campaign’s defining moment for Stapleton: “The England game was huge. That was a night where everyone was in the zone. I really felt from the moment the ball was kicked in that night that everyone was so tuned in. It was so special it almost felt like it just couldn’t go wrong for us. All the time, we were communicating, coming up with a plan for the next phase and just working stuff out.”

The Triple Crown followed after they whacked Scotland 30-3 and last week came the day they’d waited years for: They toppled France in Ashbourne to take them to within touching distance of the title, which was confirmed as theirs on Sunday when England defeated Italy.

“When we found out England beat Italy last weekend, we knew we had the Six Nations won, but it was in our heads straight away that we had to finish it off now,” says Muldoon, for whom last week was a special occasion.

“We were down at half-time, but we stayed positive.

“We had to keep believing. We’d never beaten France before, but we won the Triple Crown, so we knew we were capable.

“We didn’t panic and we kept the heads – that got us the win.”
For Stapleton, last weekend wasn’t about success. For there still stands one step until greatness can be achieved.

“Winning the Six Nations was nearly like an anti-climax in a way,” she muses.

“We were just so happy to have beaten France – a team we’d never beaten before. We weren’t thinking about the end result in terms of the big picture at all, but was just about beating France. In that sense, it doesn’t really feel like we’ve won anything.

“Our focus all the time is about performing, number one as individuals and number two about gelling as a unit.”

These are heady days for the women’s game in a country that didn’t previously take note. They’re a far cry from the days, at the 1998 World Cup, when an Irish team headed to Amsterdam at their own expense and slept on floors. Five years earlier, on Valentine’s Day 1993, Ireland played their first women’s rugby game, a 10-0 defeat by Scotland in a game for which the players bought their own kits.

In 2008, the IRFU took them under their umbrella. The change since has been startling.

“We have done a lot of work on strength and conditioning and also on general fitness,” says Stapleton, who now works for the IRFU as Women’s/Girls Executive, looking at the development of the game in terms of participation.

“More resources have been put into the game this year. The IRFU are really behind us now. It was just said a few months back that this was what we needed to be competitive – and that is really showing now.

“We’ve all got fitness programmes and are doing weights training. It keeps you very fit, at the top of your game, but what it also does is keep you very focussed at the highest possible level performance-wise. When you’re in the gym with the Irish girls, you’re talking high end rugby all the time and you’re very much in tune with it all.”

Muldoon’s younger sister, Ellen, is also making waves with MacCumhaills and is expected to be on the Donegal minor panel this year.

Larissa is a full-time student at Metropolitan University in Cardiff, where she is studying for a Masters in Sports Management and Leadership.

Her schedule would leave you fatigued just reading it. On Boxing Day, she was off to Cork for training and she also participates in the Sevens circuit.

She says: “That is a great boost fitness-wise, but even before Christmas we were on strength and conditioning programmes. We’ve been following them perfectly and it has really helped us.

“The coaching has been amazing. That has been a big thing. We’re more focussed this year.”

Stapleton was an accomplished Gaelic footballer, who played a big part in the All-Ireland Intermediate final of 2010, in which Donegal defeated Waterford at Croke Park.

She initially played on the wing, but her eye was always on the number 10 shirt.

She says: “It wasn’t that I was ‘bored’ playing on the wing, but when I played GAA I played in midfield and was always playing as the link between defence and attack. I missed that level of action and that level of decision making.

“I wouldn’t want to play anywhere else; it’s such a rewarding position.”

The Grand Slam is a prestigious title in rugby.

In times gone by the pressure of its possibilities would be enough to buckle the best of them. But there’s something strong within this Irish group.

“In previous years, there’d maybe be a bit of doubt and it’d be all: ‘what if we mess this up?’

“The management do really detailed analysis and feed that all into us. We’re also looking at the opponents, both our opposite numbers and the other team as a whole, and wondering: ‘how can I beat them and what can I use to my advantage?’.”

Muldoon ‘can’t wait for it’ and is hoping ‘it’s going to be one to remember’.

The bigger picture doesn’t come into it for her. Not yet. Not until it’s time to reflect.

She says: “I don’t like to talk about a Grand Slam too much. It’s just another game we have to win. We’ll go and play it like that – as a team, as a family.” 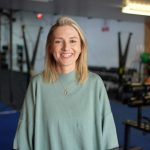 Nikki Bradley getting ready for 2022 Donegal Half Marathon