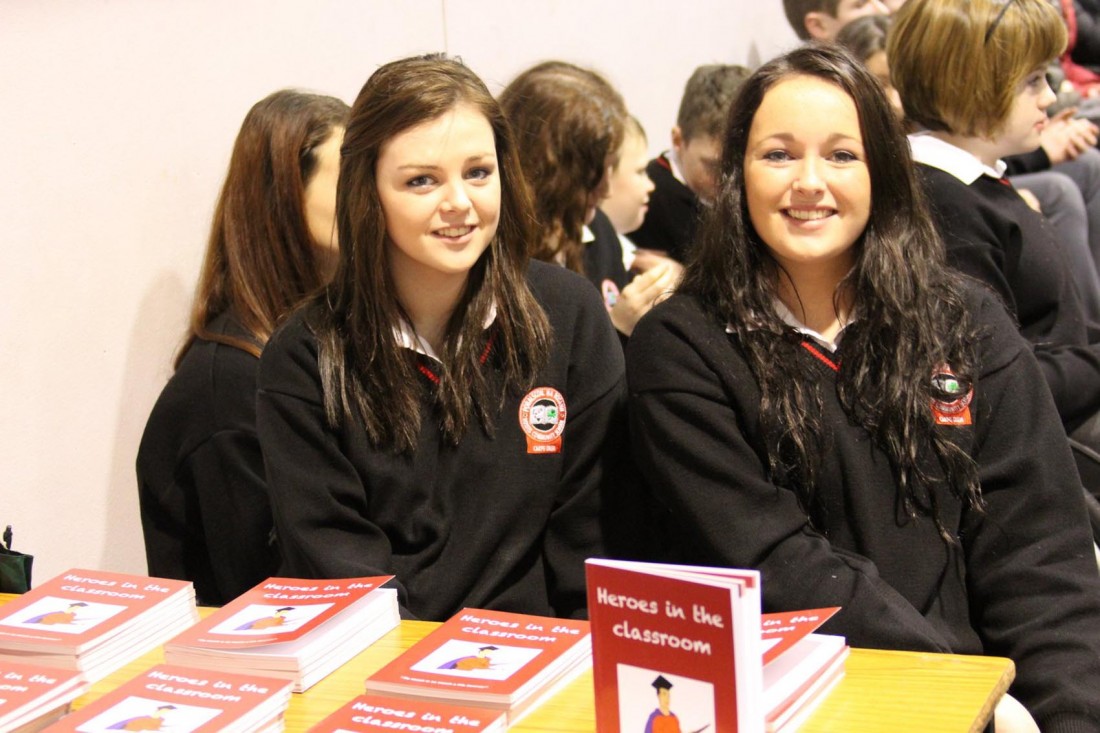 Andrea Ogelsby and Katie Boyle, TY students, selling Heroes In The Classroom at the recent launch.

BY SEÁN P. FEENY
DUE TO phenomenal demand further copies of a book compiled by West Donegal students to raise funds for a baby with a rare skin condition have been printed.

The book celebrates teachers who have made a positive impact on students’ lives and includes stories by GAA stars, British royalty and other celebrities.

It is raising funds for seven-month old Lucy, the daughter of Carleen and Gary Gallagher from Maghery, who is still at Our Lady’s Hospital for Sick Children in Crumlin.

Lucy was born with a rare genetic skin condition called Harlequin Ichthyosis. She is the only one with the condition in Ireland and there are less than 100 word-wide.

The first print-run of 400 sold out very quickly and so the school ordered another 400 copies which arrived at Rosses Community School earlier this week.

Baby Lucy’s story and the students campaign received nation-wide attention and there have been requests for the from all around Ireland.

Principal, Mr John Gorman paid tribute to the great community spirit in the greater area of Dungloe and support the students had received in their campaign.

“The feedback has been hugely positive, especially about our students and the work they have done together with their teachers, which is really lovely to hear.

“The students have been delighted to be associated with the national attention Lucy’s story has received and the fact that they have been able to raise awareness of her condition.”

Mr Gorman paid tribute to other schools in the Dungloe and neighbouring parishes, especially the national schools, that had come on board to raise funds for Lucy Gallagher.

“It has been great to hear that the level of care and awareness towards the project has filtered through to other members of the community, our younger children and beyond the Rosses in general which just shows that the personal element struck a chord with people.”

Heroes in the Classroom is available in Dungloe from Books & Charts, The Cope, McElwee’s, Sweeney’s Newsagents, Londis in Mountcharles and Eason’s in Letterkenny.