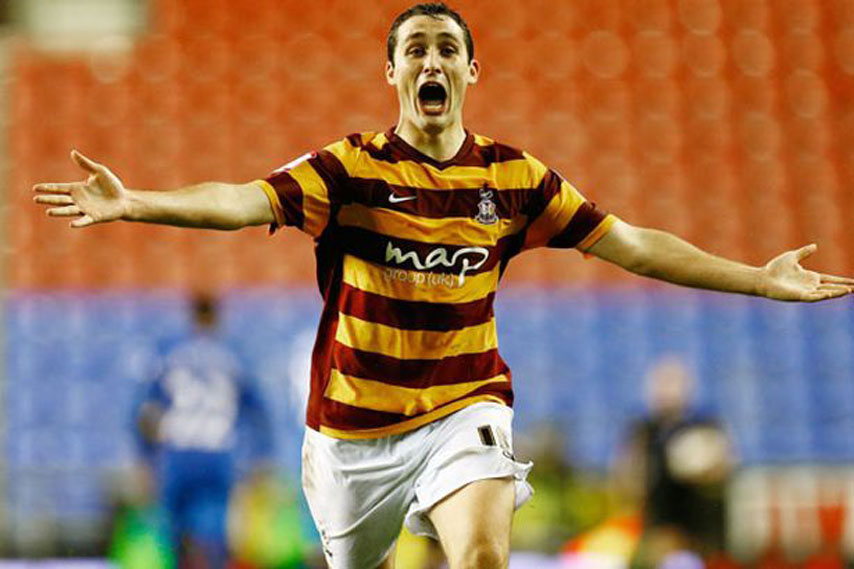 FIVE months have passed since Patrick McBrearty and Donegal won the All Ireland senior football title at Croke Park.

Among the thousands of proud Donegal supporters at GAA headquarters that September Sunday afternoon were Carl McHugh and Brian McGroary who, together with McBrearty, spent a week on trial at Glasgow Celtic less than four years earlier.

Within months of that week-long trip to Parkhead, McGroary had signed for English Premier League side Wolverhampton Wanderers while McHugh had taken up an offer at Championship club Reading. McBrearty, meanwhile, chose to stay at home, playing gaelic football with his club Kilcar and Donegal.

Fast forward to Sunday, September 23, 2012 and, as McBrearty proudly lofted the famous old Sam Maguire Cup into the Dublin sky, McHugh and McGroary watched on with mixed emotions from the stand.

Immensely proud of their achievement of their close friend, they were also frantically trying to resurrect their own fledgling professional soccer careers.

By that stage McGroary had returned home and had linked up with Derry City in the Eircom League while Carl McHugh was plying his trade in England with League Two club Bradford City.

On that historic September Sunday afternoon, Carl McHugh was on the brink of turning his back on the professional game and coming home. But he decided to give it one last go.
At 1.30am on the morning of the cup final Carl got out of bed to go for a training run.
It was part of a strict training regime put in place by his new employers and it was the only window of opportunity open to him.

Brian McGroary takes up the story.

“Carl had been up since the middle of the night to get his run done. He’s then flown home and he’s sitting beside me at the All-Ireland final. When the game was over everyone was jumping with joy when Carl remembered that he had a flight to catch back to England in three hours time.

“He’s frustrated as he had not getting much game time with Bradford and was spending a lot of time on the bench. Suddenly he turned to me and says: ‘I don’t think I’m going back – I don’t want to go back’.

“Thankfully, in all the hype, he knew he had a job of work to do and he went back to Bradford more determined that ever to succeed,” McGroary explained.

“Within a week or two the two centre halves got injured and he got his break and look at where he’s at today,” he added.

In six days time Carl McHugh will line out for the Bantams at Wembley as they lock horns with Swansea City in the Capital One Cup final.

McHugh, it seems, can do no wrong at present.

Last month he made his debut for the Republic of Ireland U21 team while he’s just been offered a new contract at Bradford. Throw in the Young Player of the Month prize for January announced this week and McHugh’s popularity is confirmed.

Back home, more precisely Toome, Leitir, Carl’s parents Gerry and Mary, his brothers Adam and Aidan, sisters Nicole and Shannon are busy getting organised to join him at Wembley next Sunday afternoon.

At the time of going to press 114 tickets had been secured for family and friends and the mass exodus to London will start in the coming days.

Last Friday night is local club Na Rossa organised a function in McCready’s Bar at which family and friends gathered to talk about Carl’s magnificent achievement.

The green and gold Donegal flags have been replaced by Bradford City flags and locals are greedy for yet more success.

The MC for the evening was Tom Comack, Donegal Democrat, who was joined on the panel by Carl’s dad, Gerry, Pat Ward, who was his under-age coach at Dungloe Town, Declan Bonner, a member of the 1992 All-Ireland winning team and Brian McGroary, a friend and former team-mate from the Republic of Ireland Youth team.

Both Brian and Gerry attended the semi-final win over Aston Villa and Brian recalled a glorious cup journey which started against Watford.

“That was a massive result (Watford). Beating a Championship team was the highlight of their season and they didn’t think they would go any further.

“Then they beat Wigan (penalties), Arsenal (penalties) and Aston Villa. The Arsenal game was the first time I’d seen him play live in a couple of years and he was a completely different player. He was a lot more mature and developed and I’m delighted for him,” he said.

Declan Bonner suggested that Carl could have been on last year’s All-Ireland winning panel had he decided to stay and home and play GAA.

“Had he continued to play GAA I’ve no doubt that he could have been on the Donegal squad alongside McBrearty. The two of them were in the same age group. I remember when Na Rossa played Kilcar at U10 level. Carl played midfield and was marking Paddy (McBrearty) who scored 1-09 but Carl scored 1-10. He was a very good GAA player,” he said.

“He was part of a very good Dungloe team at that time – four or five of whom went on to play League of Ireland football and we’re all very proud of Carl,” he said.

Gerry McHugh, himself a talented centre-half with Ardara Town, St Catherine’s and Keadue Rovers three decades earlier, said that he encouraged his son to play all sports from a young age.

“I gave him the chance to play both. The GAA was the main one at under-age level but the numbers weren’t there and he went away ad played soccer and, for a while, he played both,” he said.

Na Rossa’s loss has been Bradford’s gain and everyone is Leitir, the greater Rosses and Donegal, will be cheering for a Bradford win next Sunday afternoon.
Here’s hoping.