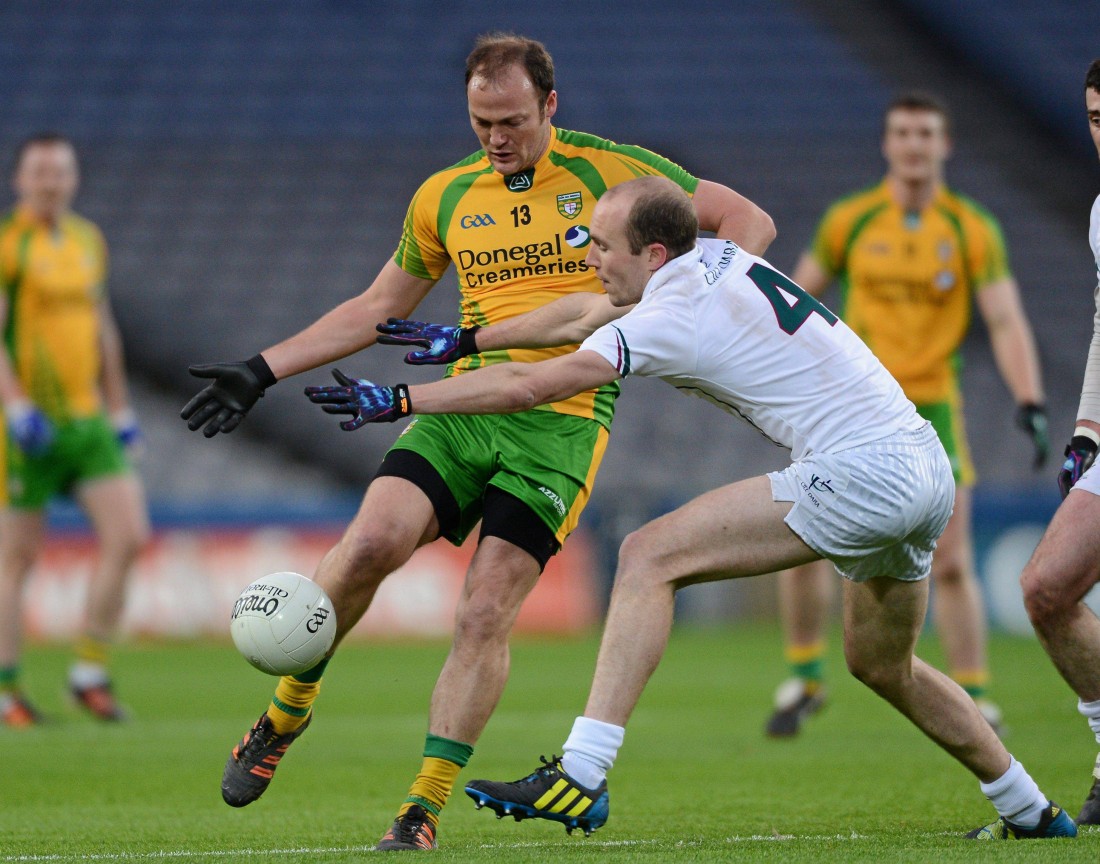 Colm McFadden limped out of the action this evening with a hamstring injury.

THESE teams have served up drama before, of course, but this was an exciting start to the National Football League, rather than their last, gripping Championship struggle from two years ago.

This was not a night for the goalkeepers, as goals from Tomás O’Connor and John Doyle gave Kieran McGeeney’s Kildare a four-point success over Donegal in what was a useful opening night that will have gone some way in dusting down the winter cobwebs.

It was something of a bizarre evening at GAA headquarters and the game followed a strange sequence.

Ultimately, it was Doyle’s speculative 64th minute goal that was the difference between the teams.

The veteran Allenwood man punted goalward and, with Paul Durcan deceived and off balance, the ball agonisingly dropped over the Four Masters man and into the net. At that stage, Donegal had just been two in arrears after a strong third quarter hauled them back into the reckoning.

Tomás O’Connor netted in the first half with Kildare seemingly cruising at one point, though Donegal – inspired by Michael Murphy’s utter brilliance – came storming back to serve up a useful opening dish.

“We weren’t at our normal selves in the first half and we didn’t have our usual intensity,” said the Donegal manager, Jim McGuinness.

“That was understandable as we’re four or five weeks behind Kildare in terms of our preparation, but we’re very happy with our second half.

“It was a good, gritty performance in the second half. We had a lot of mistakes, but thst happens at this time of year.”

Marty Boyle and Ross Wherity were the two to profit for Donegal’s return to the scene of September’s day of glory, though the surroundings this evening were in stark contrast to those of four months ago.

Colm McFadden and Frank McGlynn both left this evening’s action after picking up hamstring injuries, the extent of which won’t be confirmed until the beginning of the week.

The cobwebs were dusted down as Donegal shot into a three-point lead inside of ten minutes, with two early Murphy frees followed by Patrick McBrearty slotting over.

There, though, was where the early honeymoon ended.

Kildare hit the front with a fortunate 18th minute goal.

Mikey Conway’s well-struck free careered off an upright, but Tomás O’Connor was the quickest to react, the Clane man flinging himself forward to thrust home from close range and putting the Lilywhites ahead for the first time.

When last these teams clashed in a similar Saturday dusk clash in July 2011, O’Connor had a perfectly legitimate goal ruled out at the same end on the night Kevin Cassidy struck a famous winner for Donegal in extra time.

A Murphy point – that really should have been a goal – in the 27th minute was all Donegal added for the latter 25 minutes of the first half. Kildare were growing in confidence all the while and, as they headed for the Cusack Stand at the interval, they had a handsome five-point lead.

The evergreen John Doyle scooped over three points, two of them frees, while Brian Flanagan, Niall Kelly and Padraig O’Neill got in on the act, each landing good scores.

In stoppage time, Murphy won and pointed a free from close to the ’45, but the scoreboard showed Kildare 1-7 to 0-5 in front at the short whistle.

Murphy might well have had a goal when he fetched Anthony Thompson’s pinpoint deliver, but he whipped just over the bar as Hill 16’s net seemed set to bulge from the Glenswilly man’s effort.

But for a strong save by Paul Durcan, Kildare could have had a second goal, but John Doyle’s shot – following a surging incision by corner-back Hugh McGrillen – was turned over by the Donegal netminder.

That save was the catalyst for a Donegal purple patch. Murphy showed all his top credentials with a classy point to kick start a four-minute spell that yielded four scores with Patrick McBrearty (free) and Rory Kavanagh on the mark before Murphy converted a free for his eight score of the evening.

Ten minutes from time, Dermot Molloy slotted over and suddenly it was a one-point game again, only for Doyle to secure the points for Kildare.