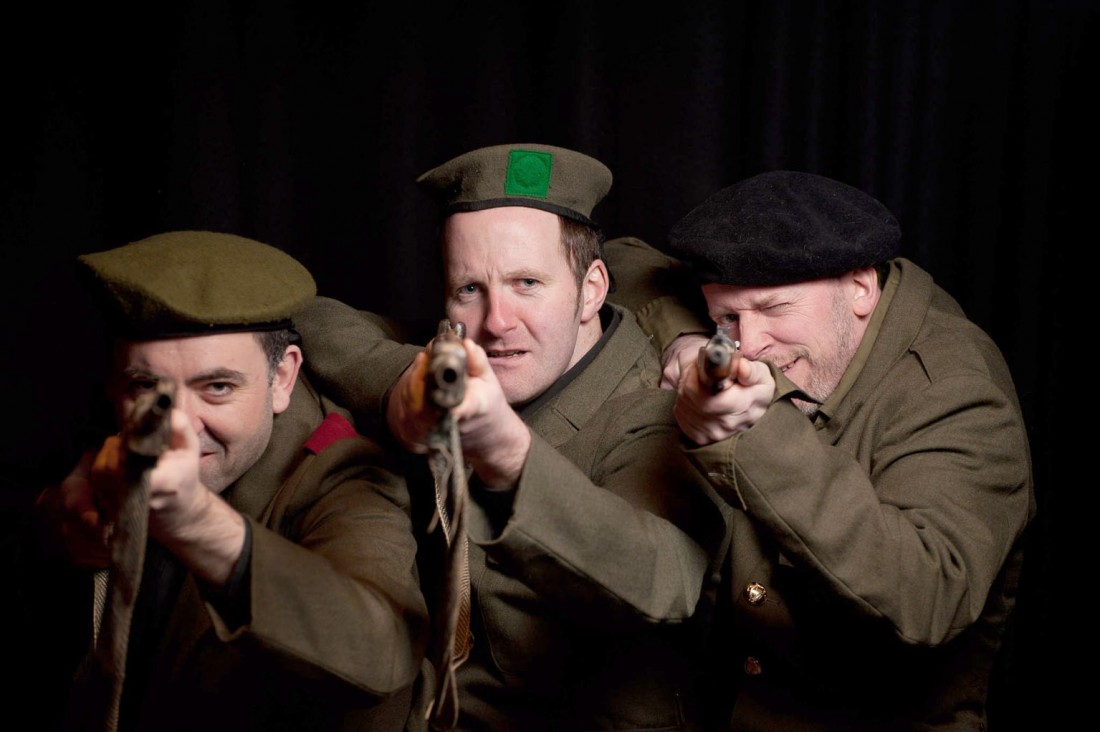 The LDF men in action.

Peopled by a power crazed Army Reserve Sergeant, love struck teenagers, a doctored greyhound and a dodgy Garda, the ‘Players’ have their work cut out for them if they are to get their hands on any elusive black market petrol in order to escape.

As Madame MacAdam asks ‘How can we act in front of an audience who are constantly performing?’ featuring some regular faces from the Butt Drama Circle: Paddy McMenamin, Brian Duffy, Jack Quinn, Laura Friel, Maria Heekin, Aoife and Edward Flanagan and some newbies from the Letterkenny Music and Drama Group: Kieran Kelly and Elaine Gillespie.

Directed by the talented actor Sean Byrne this broad comedy will keep you laughing long after you’ve left the theatre.

It’s 1943. The Emergency, what Dev called WW2 is in full swing and while the rest of Europe burns and bombs well Eire….doesn’t.

Life here enjoys its own surreal pace with rationing, smuggling and general run of the mill ordinariness the reality for most of the people.

Of course there are our own little Hitlers and Himmlers in uniforms itching for an invasion so they can be part of the whole drama as well as those running away from the darker side of fascism.

Throw into the pot some failed actors and a missing child and you have a recipe for a very strange cake indeed.

First performed by Derry’s Field Day Company in 1991, this play by one of Ireland’s leading and most respected playwrights sees a welcome return to the boards.

As the play contains some strong language it may only be suitable for those 14 years and over.

The play runs from Wednesday 27 February to Saturday 2 March and then off to the Festivals.Booking now at 074 9131840.