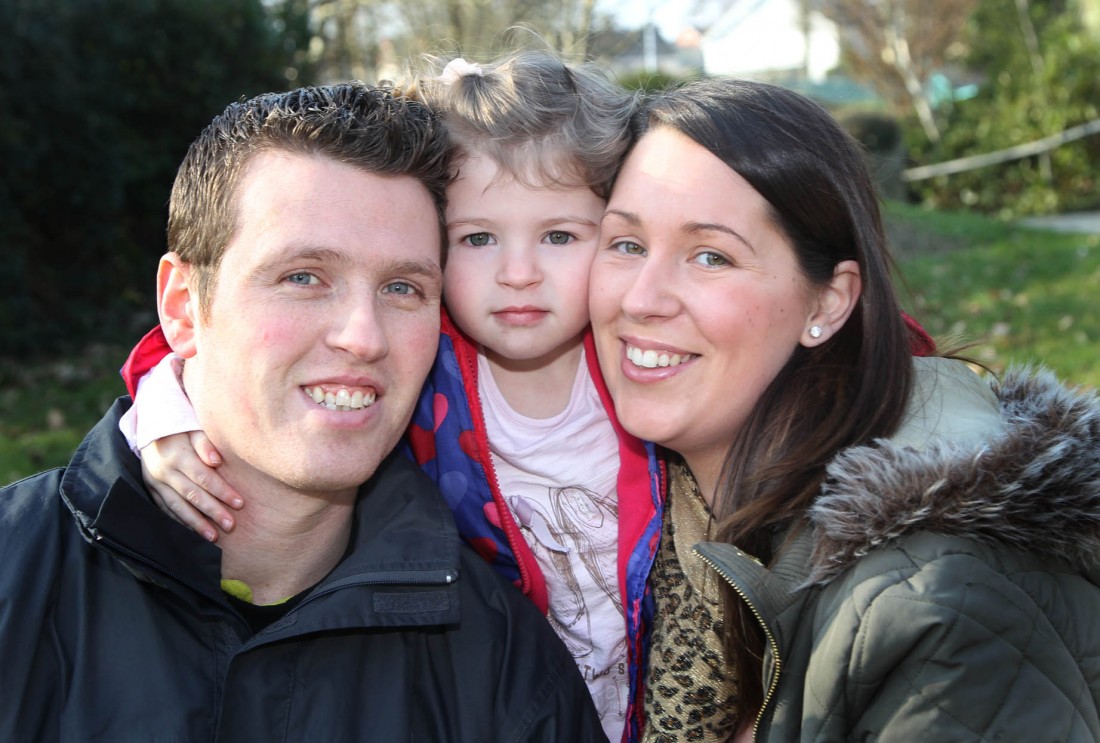 BY SEÁN P. FEENY
IF YOU had the ability to treat blindness, would you only cure one eye? This is the comparison campaigners for the State to provide funding for two implants to deaf or partially deaf children and adults in Ireland are making. Alison and John McFadden, Letterkenny, are members of the Happy New Ear campaign which is petitioning for signatures to present to Minister for Health, Dr James Reilly TD, asking him to provide funding for bilateral Cochlear implants for deaf children in Ireland.

Under the National Cochlear Implant Programme, at present, children in Ireland get one implant, even though it is recognised as international best practice to provide children with two implants.
Alison and John’s daughter Taylor Beth (2) was diagnosed as being profoundly deaf when she was 19 months old.

Alison said: “We were referred to Beaumont Hospital which runs the National Cochlear Implant Programme. After months of tests and appointments she was finally accepted onto the programme and was fitted with a Cochlear implant on November 1, 2012.

“After three weeks of healing we returned to Beaumont for the implant to be ‘switched on’ which would allow her to hear for the first time.
“This was an extremely emotional day for us as we realised our baby had never heard us tell how much we love her up until this point.”

The couple said they were told they had to start from the very beginning as their daughter was behind in terms of speech development due to her hearing condition.

“It has been just under three months since Taylor joined us in this hearing world and the changes in her have been amazing.

“She has started to babble ‘Mama’ and ‘Baba’, the way any young baby would start off – these being words we thought we may never hear. She is also turning whenever we call her name, truly a miracle,” said Alison.

There is a downside to Taylor’s current situation and this is one the couple and all campaigners behind the ‘Happy New Ear’ petition hope to remedy.

“As Taylor only has an implant on one side, her brain is so exhausted in the evenings as its being overworked trying to take in all this information through one ear.

“Recently a group of parents, all with kids with Cochlear Implants, have formed this campaign Happy New Ear. What happened next was simply amazing.

“National newspapers ran the story which lead to a piece on TV3’s 5.30 news, along with a piece on Primetime currently in the pipeline.

“Local TD’s took on to raise the issue and Gerry Adams TD was filmed asking An Taoiseach Enda Kenny why these children were ‘only getting one implant when it is seen as best practice everywhere else in the world to fit for Bilateral implants?’.”

Alison and John, and their fellow campaigners, feel that this is a cause worth fighting for as a second implant would allow little Taylor to progress at a much faster pace and more chance of being on level par with her peers at school etc.

John said: “If Taylor had two implants she wouldn’t have to worry about not hearing what her teacher says in class. It is also very tough on her having to take in all this information through one ear, she is so tired by the evening, so that would also be really hard on her after school.”

Alison added: “Taylor has come on a lot since receiving her first implant, but it would be so much better and quicker with a second, her poor little brain has to take in so much, by 5pm she is just wrecked from the day.”

While Taylor is still developing her speech, John and Alison have both been attending Irish Sign Language (ISL) classes with the Donegal VEC, while they also have a teacher visiting regularly to work with their daughter.

Their families in Gortahork and Dundalk are also learning ISL to help her along, but at the moment they do have to hold back a little on using ISL to allow Taylor’s speech to develop.

They have not come across any other parents in Donegal in the same situation as themselves so they would be delighted to speak to them and invite them to join the campaign (Search ‘Happy New Ear’ on Facebook). You can sign the petition by logging onto www.thepetitionsite.com and searching ‘Happy New Ear’.

If you have an issue would like us to raise contact us on Tel. 07491 21014, via email editor@donegalnews.com or call into our office The High Road, St Anne’s Court, Letterkenny.