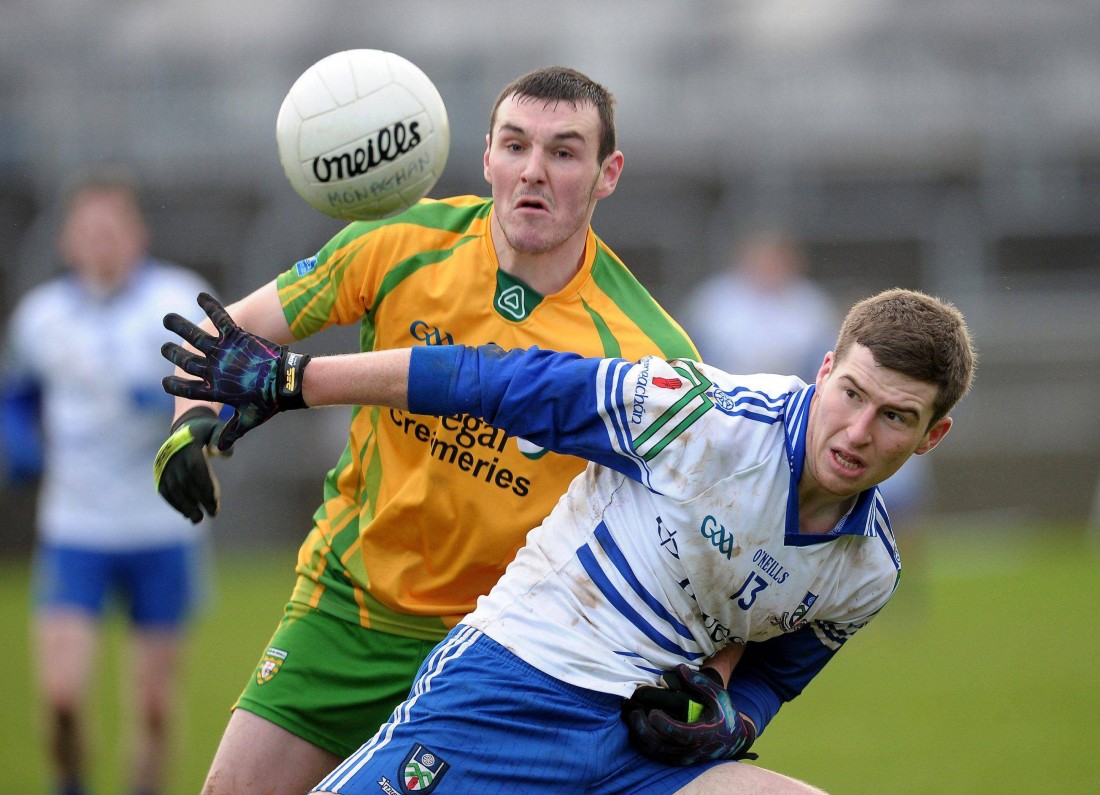 Kevin McFadden gets to grips with Monaghan’s Keith McEneaney.

KIERAN Hughes kicked six points as Monaghan had seventeen points to spare over a very experimental Donegal in Ballybofey.

Hughes hit five from play as second half goals by Keith McEneaney, Dermot Malone and Darren Hughes saw Monaghan coast to a win.

Jim McGuinness had the Donegal senior team in training yesterday morning and again none of his marquee names were in the panel with All-Stars Michael Murphy and Neil McGee among the watching sparse attendance.

“Donegal were obviously missing a lot of players, but we can only concentrate on ourselves and we’re happy with where we are,” observed a content O’Rourke.

“We were five up in the first half and then we conceded a bad goal. It was nice to come out and pick it up for the second half. Our movement was good and we took some good scores, so overall we’re pleased with today.

“We’re happy with our defensive work and some of our support play was good. As the game opened up, we moved the ball better and took some very good scores.

“The main thing was the work rate and they applied themselves very well.”

Donegal made five changes to the team that lost to Fermanagh in Enniskillen on Wednesday night. Declan Walsh was captain for the day on his return, while Peter Boyle, Cory Gallagher, Caolan Ward and James Carroll also came into the team.

In the cases of Dungloe’s Gallagher and Gaoth Dobhair man Carroll, their appearances marked their senior debuts, while it was a first start for Ward, who came on as a sub in Fermanagh.

St Michael’s player Michael Cannon was handed a first senior appearance considerably earlier than he’d have imagined as he got the nod just five minutes in to replace club colleague Daniel McLaughlin. Cannon showed some flashes of good alertness, awareness and ability in an encouraging display.

Monaghan were in control almost from start to finish, aside from a period in the first half that coincided with Adrian Hanlon’s 28th minute goal, which was Donegal’s first score of the game.

Monaghan hit five in a row before Hanlon netted from close range. Gary McFadden took the deficit into a point, but frees from Paul McArdle and Conor McManus gave the Farney men a 0-7 to 1-1 lead at the break.

Just 20 seconds into the second half McEneaney scorched home the opening goal of the game and the tale had an ominous look from here for the shadow Donegal selection.

With Hughes arching over points from all angles, Monaghan took complete charge of proceedings and a 60th minute goal from sub Malone, cracking home having been teed up by Kieran Duffy, had them fourteen in front.

In the final minute, Darren Hughes palmed home the third to confirm a landslide win that leaves Monaghan and Fermanagh locked at the top of Section A ahead of Wednesday’s meeting of the two in Inniskeen.

Donegal manager Jim McGuinness, whose big names took part in training this morning, said: “We’re building it up slowly and steadily and our training will increase intensity wise over the next three weeks. It would have been dangerous to fire them straight into game.”