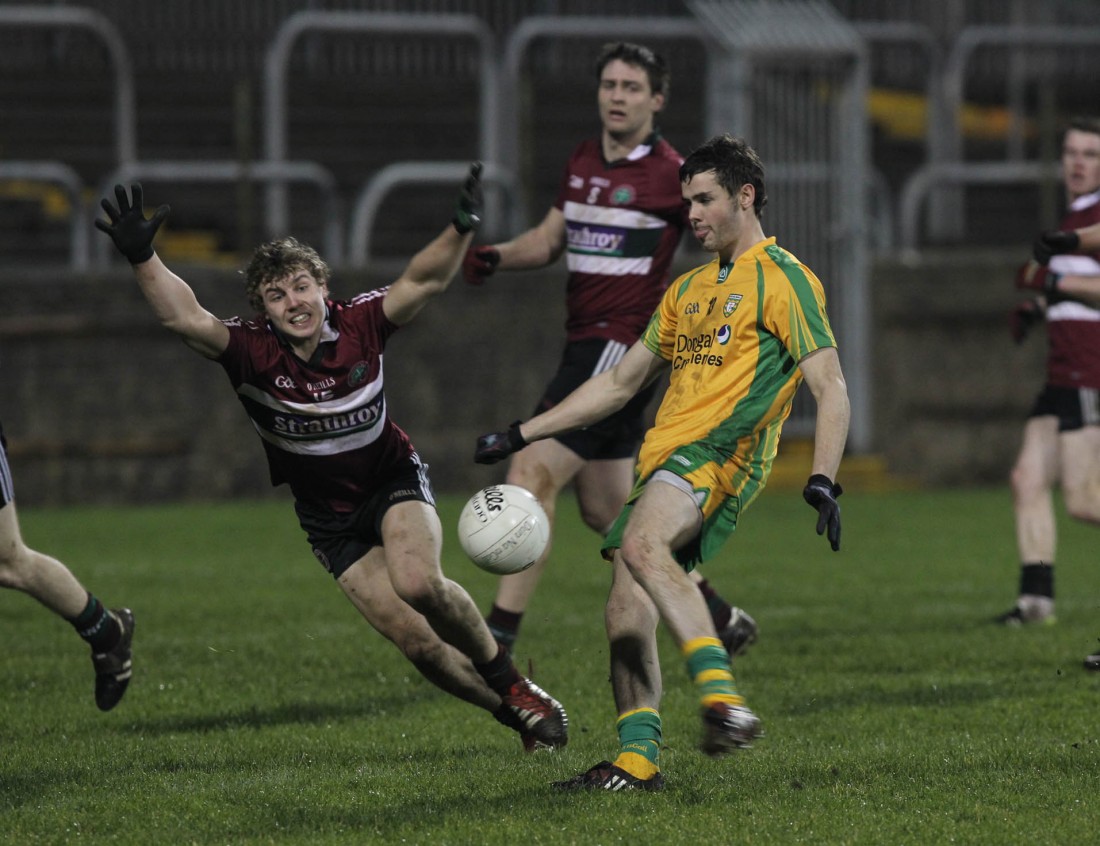 DONEGAL scored their first win of 2013 before a paltry attendance of 200 at Ballybofey.

Confusion reigned at the conclusion with the scoreboard showing the game had ended in a draw, though the phantom St Mary’s point hadn’t made it as far as the abacus of the referee, Donal Connolly.

It was a useful run out for another experimental Donegal for whom Odhran MacNiallais shone in the first half, scoring an impressive 1-3.

The scales had tipped in favour of the students late in the day when Dromore’s Sean O’Neill slotted over a majestic score from distance.

Wherity levelled and in the final minute Gibbons clipped over a free to give Donegal the win. The game’s top scorer Herron – who closed with 1-5 to his name – fired a late equalising chance wide of the mark.

And it was the young Gaoth Dobhair man lit the touch paper in the opening exchanges.

Eight minutes in, he fetched a raking Michael Cannon ball into the danger zone before coolly finishing past Darragh McAnenly.

An early brace from MacNiallais and the opening point, a John O’Malley free had Donegal 1-3 to 0-1 ahead.

A path back in for Paddy Tally’s students came when Donegal netminder Peter Boyle took down Brendan Hasson, leaving ref’ Donal Connolly with no option but to award a penalty.

Brendan Herron stepped up to convert in style and St Mary’s were within a point when Ronan Sexton arched over.

MacNiallais and Herron swapped points before McAnenly saved St Mary’s with a fine save to deny Ciaran Cannon after MacNiallais did well to keep the ball in play.

Luke Keaney and Packie Mailey put Donegal’s lead out to three, but it was St Mary’s who finished the half the stronger. Two minutes before the break, Herron was again at the fulcrum of a move that concluded with the Ballinascreen man unselfishly squaring for former Down player Sexton to slot home to an unguarded net.

A Herron free put St Mary’s ahead for the first time in first half stoppage time, the visitors holding a 2-5 to 1-7 lead at the short whistle.

After Hasson and Herron pushed the St Mary’s lead out, Donegal hit back to draw level thanks to O’Malley (free), sub Sean McGarvey and Keaney’s second of the game.

Donegal were back in the driving seat again when Conor Gibbons prodded through a pinhole and a fifth Tir Chonaill point in a row came when O’Malley impressively slotted over from distance.

In between times, Boyle came to the Donegal rescue when he came out to thwart the advances of Richard O’Callaghan’s whose batted follow-up crashed off the bar.

St Mary’s looked to have done enough when Doyle and O’Neill swung over scores, only for Donegal to edge ahead with their late brace.