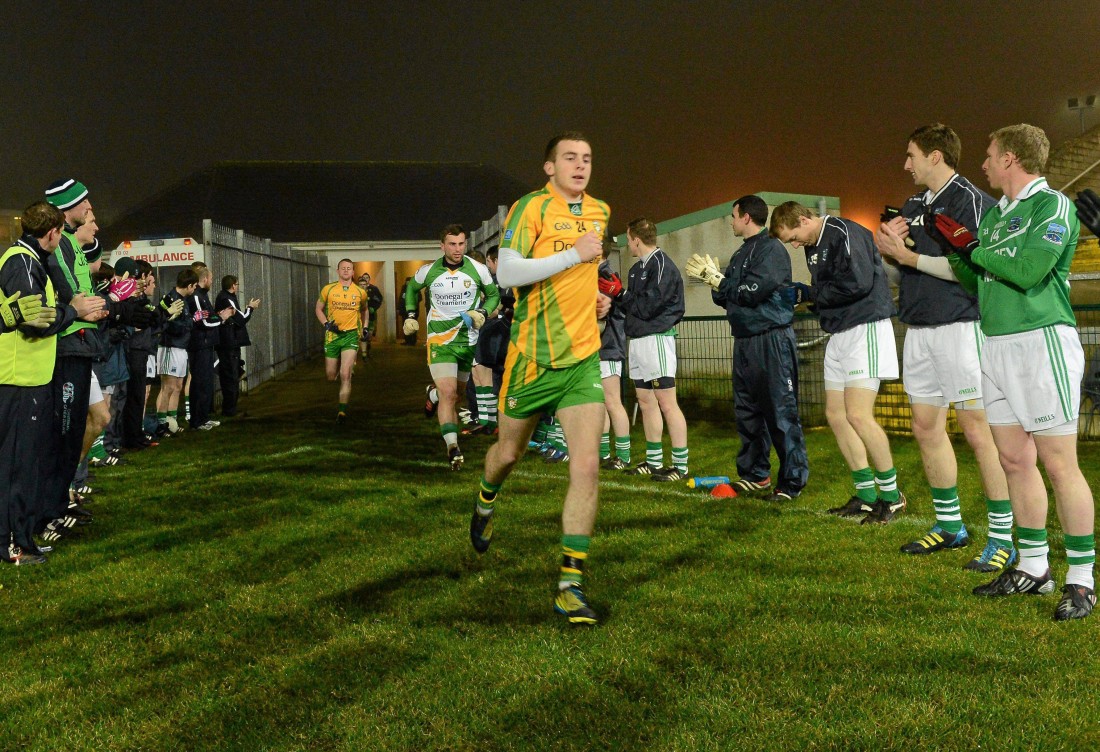 Donegal are given a guard of honour by Fermanagh at the start of tonight’s game.

By Chris McNulty in Enniskillen

JIM McGuinness says that the Dr McKenna Cup will continue to be experimental for Donegal as he seeks to bolster his senior panel for the National Football League next month.

McGuinness and Rory Gallagher, his assistant, watched the bulk of this eight-point defeat to Fermanagh from the stand in Brewster Park on Wednesday, with under 21 manager Maxi Curran calling the shots on the line for a Donegal team that was largely made up of players from his squad.

It was a sure-fire sign that Donegal are very much in development mode for this particular batch of players who have been given a chance to showcase their colours in the senior shirt.

Donegal swapped the Dubai desert for bitter Brewster in foggy Fermanagh  and goals from Darryl Keenan and Tomas Corrigan handed a fairly strong Erne side a comfortable win in a game played at an at best pedestrian pace.

Fermanagh were full value for their success on a night when Peter Canavan’s team accorded the All-Ireland champions with a guard of honour at the outset of the evening – but the starting team contained no players who played in the All-Ireland final.

Indeed, All-Ireland sub Dermot Molloy was the only one of those to get game time in September and see action in this tie – the Naomh Conaill man scoring Donegal’s second goal in the 62nd minute.

Molloy was one of six players to play having only returned from the ten-day team holiday in Dubai on Tuesday afternoon. It was no surprise that there were signs of jetlag.

“This (McKenna Cup) is a chance for the peripheral players who didn’t get a go in the county jersey to get game time and then Maxi’s under 21s come in as well,” observed McGuinness after the game.

“It would have been foolish for us to throw anyone in there tonight to get injured at this stage of things.

“This is always a bit of a disjointed time of year, so our focus this year is on our main squad and trying to find a player through the McKenna Cup.

“Maxi takes the under 21s and that’s why he’s running things for us. It’s a good chance for him to get a look at his players.

“It’s just a case of looking at players around the county who haven’t got their noses in over the last 24 months. It’s about trying to find maybe one player who we can add to our squad – if we can do that it’ll have been a very worthwhile exercise.”

Just five minutes in, Donegal were on the back foot as Fermanagh bagged an early goal, Daryl Keenan coolly finishing past Michael Boyle from close range having been picked out by Paul Ward.
Shane McGowan, back in a Donegal panel after a couple of years away from the scene, marked his return with a splendid seventh-minute point, before Kane Connor restored the goal’s advantage.

McGowan was caught for that early goal of Fermanagh’s, but returned to put in a composed display, with Thomas McKinley and Gary McFadden – two peripheral members of the 2012 squad – showing well in phases too.

It wasn’t, however, a night for in-depth analysis and it would be grossly unfair to make a judgement call on anyone based on this outing, a contest that will be long forgotten by the time the ‘serious’ stuff commences.

McFadden landed a fine point from distance and Stephen Griffin tapped over a free to bring Donegal to within a point, but in the final 18 minutes of part one Jim McGuinness’s side scored just once – through a McFadden free in the 23rd minute – but with Ward (2), corner-back Johnny Woods, Marty O’Brien and Shane Lyons on the mark, the Erne men led by five at the changeover, 1-6 to 0-4.

On the half-hour mark Paul Ward seemed set to fire home a second Fermanagh goal, but he was thwarted by a fine save from the advancing Michael Boyle, after Tommy McElroy cut open a path to goal.

The McKenna Cup has never had too much lure for McGuinness. He has now lost six out of seven in the competition, but there isn’t too much to be taken, indeed nothing if truth be told, from this’s game, save for the experience garnered by the youngsters against what was a fairly strong Fermanagh line-out.

Four minutes into the second half, Sean Quigley – brother of the exiled Seamus – hit a massive point to open up a six-point deficit, before Ward’s third of the evening left Donegal staring at an eight-point gap in dense fog.

Eleven minutes into the second half any seeds of doubt about the winners were killed when Fermanagh netted a second goal, sub Tomas Corrigan finishing well with a classy finish after a neat squared pass from Ward.

Donegal salvaged some pride with two goals in the space of three minutes. First up, Adrian Hanlon got under an inviting dropping ball to direct to the net before Molloy finished well from 20 metres.

The night was Ferrmanagh’s, though, and with Marty McGrath and Sean Quigley concluding the scoring, it was they who toast victory.

“Our focus is the 26th of May,” McGuinness remarked afterwards – a theme that will be a recurring one over the next four months.

For Donegal, bigger days are marked in the calendar.