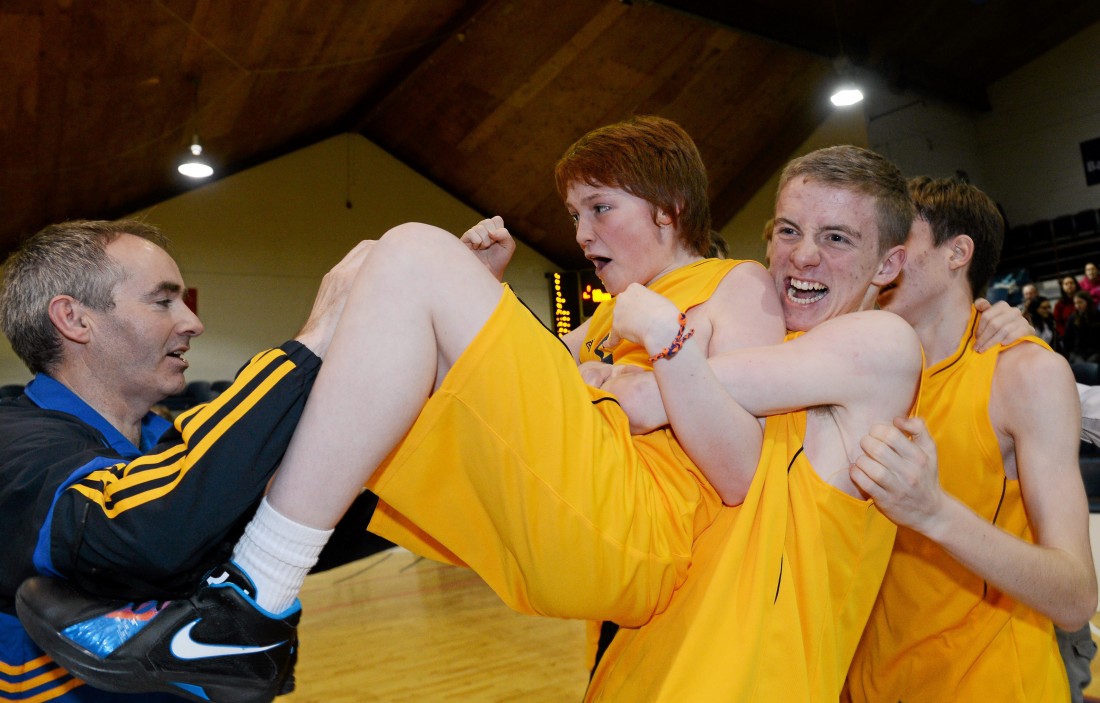 THE Coláiste Ailigh U16 basketball team created history at a packed National Basketball Arena on Tuesday afternoon when they clinched the 2013 All-Ireland Schools Cup after a closely fought encounter with Pobail Scoil Neasain of Baldoyle in Dublin.

The entire school population of 200 pupils travelled to the capital to cheer on team captain Óisín Ó Cleirigh and his team mates who were under the expert guidance of their Bainisteoir, Seosamh Mac Ceallabhuí.

Later that evening parents, relatives and friends gathered at the Manor Roundabout to welcome home the heroes before they returned to a well deserved reception in Coláiste Ailigh.
“We’ve enjoyed success in athletics, swimming and cycling over the years but this is the school’s first All Ireland appearance in a team sport. They’re a credit to the school, their parents and their coach Seosamh Mac Ceallabhuí who has worked tirelessly with them since early September,” Mícheál Ó Giobúin, Principal said.

“That was a very difficult game to win and they showed tremendous character to come through it in the end. They didn’t panic and fully deserved their win. They’ve worked very hard since the start of the year – this win just didn’t happen overnight. They’ve been out on the court working hard at lunch-time, after school and all over Christmas. It’s a fantastic day for us all. The support they got out there today was just brilliant. The atmosphere was electric and I’m just pleased that I was there to witness history,” Mr Ó Giobúin said.

It has been a great year with victories over Loreto Milford, Grange, Corran College Ballymote, St Kierans Kells and O Carolan College, both from Co Meath, Abbey College Boyle and St Geralds Castlebar.

Both teams started the game somewhat tentatively and it was three and a half minutes before the first score of the game was registered when Sean Mac a tSaoir converted a free throw.

The slow start was not caused by a shortage of chances however as both teams had success driving to the basket early on. The ball simply refused to drop despite the close in attempts, a problem that would quickly rectify itself as the players’ nerves settled.

By the end of the first quarter the score read 18 to 10 in favour of the boys from Letterkenny who were helped by some fine outside shooting by Evin Breathnach and Matís Mac Ceallabhuí.

For Scoil Neasain, Gabriel Ogundipe was proving to be a major force inside and it was evident he would be a thorn in the Colaiste Ailigh defence all afternoon.

In the second quarter, Scoil Neasain dragged themselves back into contention, led by their captain and point guard Kevin Murphy who directed affairs on the court.
The boys from Baldoyle were aided by the introduction of Sean Smith who quickly contributed four points helping his team enter the half-time break down by just four, 24 to 20.

Set up for an exciting showdown, the second half did not disappoint the large and boisterous crowd in attendance as the two sides traded blows with the gap on the score board never growing greater than six points.

The highlight of the third period was a superb up and under move by Colaiste Ailigh’s Mac a tSaoir that wrestled the lead back off Scoil Neasain directly after they had finally tied it up.

The period ended 30 to 28 in favour of Colaiste Ailigh whose Oisin O Cleirigh was beginning to exert a bigger influence the longer the game went on, scoring his 13th and 14th point early in the fourth to extend his team’s lead.

Scoil Neasain were not to be dismissed so easily however and continued strong play from Ogundipe and Murphy, who were ably assisted by Smith, had them within touching distance coming down the stretch.

It was not to be however as Colaiste Ailigh always kept their noses in front and when Evin Breathnach and then Maitís mac Ceallabhuí forced turnovers in the dying minutes it proved the decisive blow, leading to the Letterkenny school winning on a final scoreline of 39 to 34.

“I’m delighted for the lads. They’ve given it full commitment since day one and they deserve everything which comes their way. It’s nice to be part of history and, hopefully, this will provide the springboard to more success in the years ahead,” Seosamh Mac Ceallabhuí said.

“It’s been a long road for them but one which was ultimately successful. Fair play to each and every one of them,” he added.