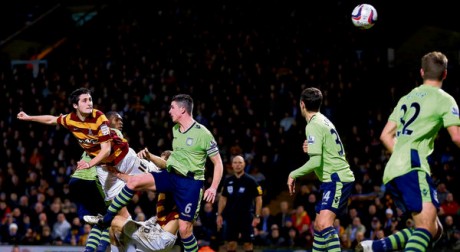 Carl McHugh finds the net against Shay Given of Aston Villa last Tuesday.

McHugh powered an 88th minute header past Given to give the Bantams a real chance of making the final at Wembley.

McHugh signed for Bradford at the start of this season and has been impressive for the League Two side, with his header against Villa his third of the season.

McHugh got a surprise after the game when Given knocked on the home dressing room door at Valley Parade to give his fellow countyman his jersey.

“I didn’t appreciate it at the time, but it’s good to see someone else from Donegal doing well in the game,” Given said.

“Carl has said he was annoyed with himself for the goal we scored and he showed good character and determination to more than make up for it by scoring himself.

“It’s a great story for him. I read that he was playing for some team called Swindon Supermarine not so long ago so fair play to him, but we’ve all got to show that same desire that he showed to get to Wembley.”

The second leg is still to come at Villa Park next Tuesday – and Given is well aware that struggling Villa simply must improve if they are to make it to the final.

He said: “We know what we need to improve on if we aren’t to let this great opportunity to pass us by.

“I’ve been in Britain for more than 20 years now and I’ve been involved in only three cup finals. I got to play in only one, and that was way back in 1998 for Newcastle United.

“The younger players mightn’t realise it now but you can’t let a chance like this slip away. You mightn’t get another one.

“If you’re drawn against a League Two side over two legs then you’ve got to expect to progress but you’ve got to do the work to make that happen. I’m sure we can get the job done.”