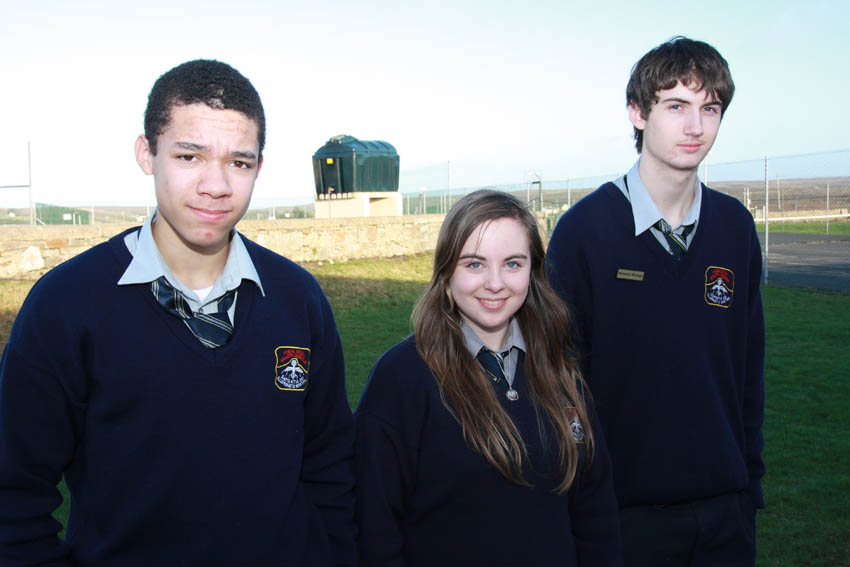 BY SEÁN P. FEENY and PATRICK QUINN
DONEGAL was well represented at the 49th BT Young Scientist & Technology Exhibition which kicked off at the RDS Arena in Dublin on Wednesday afternoon.

In total 26 entries, varying in group and individual projects, from secondary school around the county were accepted into the exhibition.

The strongest representation at this year’s awards came from Coláiste Ailigh in Letterkenny which has a great tradition of participation in the annual event. Coláiste Aligh had 12 entries at the awards, three individual and nine group projects.

One of the exciting group projects entered by the Letterkenny school included an innovation that will help victims escape during a house fire by students Pierce Gallagher, Dermot Dunleavey and Hughie Merlihan.

LED lights are placed along the path of the fire-escape plan. When the fire-alarm goes off the lights will be triggered.

The LED lights can be seen through the smoke, so the Hansel and Gretel theory (leaving a trail) is implemented, allowing the occupants of the house to evacuate safely and efficiently.

Another group, which included Paddy Ryan, Caomhin McLaughlin and Ódhran McGinley realised the dangers that motorcyclists encounter on an everyday basis on our roads.

They conducted their research and filmed a DVD showing how dangerous car-drivers made it for motorcyclists, and how they are potentially putting lives in danger.

Magh Ene College in Bundoran has six group projects at the exhibition, covering either biological and ecological or chemical, physical and mathematical sciences.

Pobailscoil Ghaoth Dobhair also has a proud tradition in the BT Young Scientist Awards and regularly has entries accepted to the final stages. This year the Gaeltacht school had four group projects in the field of social and behavioural sciences accepted into the exhibition.