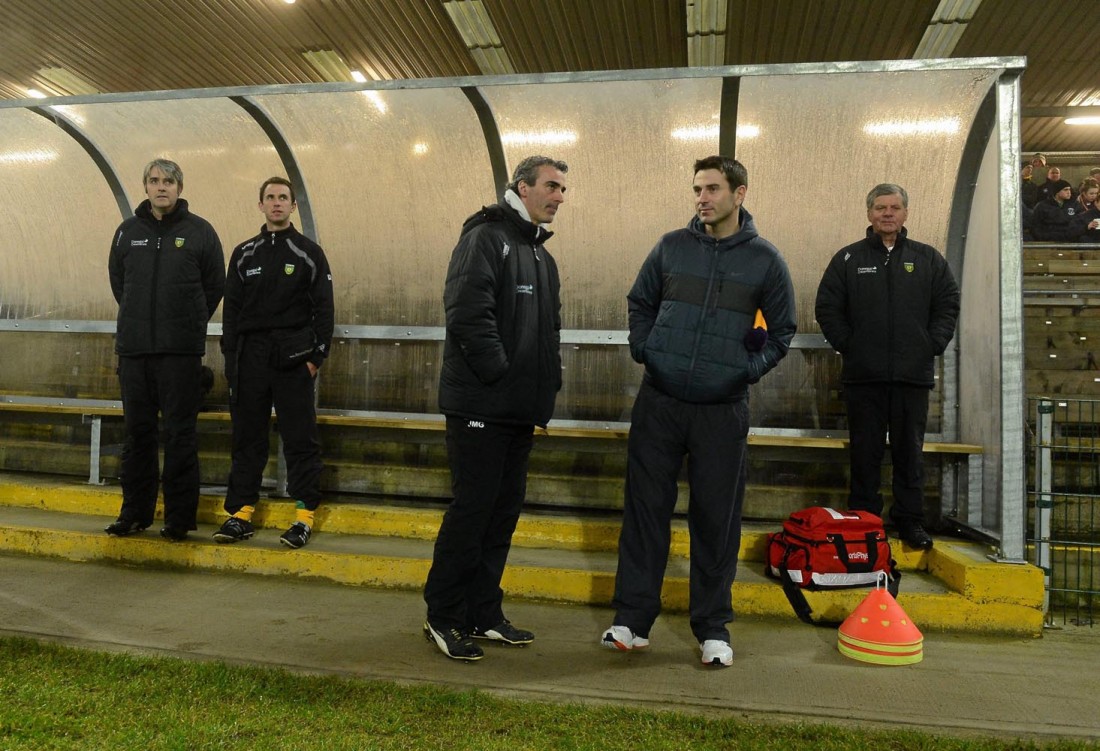 Jim McGuinness and Rory Gallagher in discussion before Wednesday’s game with Fermanagh.

IT’S a case of more of the same for experimental Donegal on Sunday when Monaghan visit Sean MacCumhaill Park in Ballybofey tomorrow for the second installment of the 2013 Dr McKenna Cup (throw-in 2pm).

Donegal gave eight players their senior inter-county debuts on Wednesday night in an eight-point defeat to Fermanagh in the Enniskillen fog.

The team was directed by under 21 boss Maxi Curran, with the team comprising largely of players bidding for places in his team for their Championship showdown with Tyrone in March.

Wednesday’s 26-man squad also contained the likes of Adi O’Gara (Naomh Mhuire) and Conor Gibbons (St Eunan’s), who are in line for shouts this weekend as is Johnny Gallagher (Aodh Ruadh) who has been namechecked by management as a player they wish to take a look at.

The 2012 All-Ireland-winning squad returned from a ten-day break in Dubai on Tuesday and a large swathe of these players won’t be returning until the National League, although Daniel McLaughlin, Dermot Molloy and Stephen Griffin saw gametime on Wednesday along with Thomas McKinley, Michael Boyle, Marty Boyle, Gary McFadden and Adrian Hanlon.

“It’ll be much the same for Monaghan – it’ll be experimental,” confirmed McGuinness after Wednesday’s game.

“This (McKenna Cup) is a chance for the peripheral players who didn’t get a go in the county jersey to get game time and then Maxi’s under 21s come in as well. Maxi takes the under 21s and that’s why he’s running things for us. It’s a good chance for him to get a look at his players.”

The senior squad was to return to training on Thursday, with McGuinness stating that they’ll train again twice this weekend before their schedule resumes next week, Tuesday-Thursday-Saturday-Sunday.

On Wednesday night, McGuinness said: “It gets serious tomorrow night because we have very little done. We weren’t allowed to train before we went away and then we were away for ten days, so that is why between now and the Kildare game is where the focus is.

“Our training focus has to be with the first team and that is what we’ll be concentrating on.

“We’re looking to find maybe one player who can bring some value to us. This is always a bit of a disjointed time of year, so our focus this year is on our main squad and trying to find a player through the McKenna Cup.

“Some other teams took a different approach and are using it to put out strong teams and build for the League. Circumstances for us – players being away at college and not being able to train – mean that wasn’t possible for us. We need to train now as a group rather than fire them into games.

“It’s just a case of looking at players around the county who haven’t got their noses in over the last 24 months. It’s about trying to find maybe one player who we can add to our squad – if we can do that it’ll have been a very worthwhile exercise.”

For the League, Donegal will stick to their 2012 blueprint, though hitting the ground running a little earlier will be the aim of the game this time around. Initial focus may well lie on Croke Park on February 2nd when they take on Kildare in the opening League encounter, but there can be no doubting where McGuinness’s mind is concentrated.

He said: “Our objective for the League will be the same as it was last year – trying to get enough points to stay in the Division. Our focus is the 26th of May, it was the same last year and the same the year before. There is no bigger game in Ulster than Donegal v Tyrone. Our full focus is on that match. Everything is about that match.”

Three months of scouring the county with Sam is over now for the 2012 All-Ireland champions and it’s back to the bread and butter.

McGuinness said: “There was a lot going on, things with the Cup, functions and dinner dances, but 31st December was the cut-off point for us and the holiday was the end game if you like. It’s nice now to concentrate on football. The boys have been asked here and there, so it’s nice now that they can say: ‘No’.

“We’re getting back to basics. It was great while it lasted and it’s all part of the process, but it’s nice to get the ball rolling again.”

Former Fermanagh manager Malachy O’Rourke is now at the helm of Monaghan. His tenure began with a useful win over St Mary’s College at Clones on Sunday.

The Farney county won 1-13 to 2-06. The experience of Darren Hughes, Dick Clerkin and Conor McManus was crucial in a comfortable win. Pauric Donaghy notched the goal on his debut and while Monaghan are experimenting too they have considerably more experience to call upon than Donegal, who will experiment now and experience later.