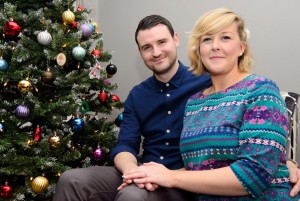 IT WAS ‘fireworks’ all the way when Falcarragh man Declan McFadden proposed to his Letterkenny girlfriend, Laura Graham, on Christmas Day.

However, the ring on her finger was not the only sparkler on show – Declan hired a professional fireworks company in order to ‘pop’ the question.

He hatched his romantic plan in the middle of October, having conceived the idea after watching the traditional Halloween fireworks display in Derry earlier that month.

“I contacted a few companies that did such displays and finally settled on Emerald Fireworks which is based in Belfast.”

While Andrew was busy setting up the display at the rear of their house in The Glebe, Laura was having her Christmas dinner in the family home nearby.

Outside, Declan had erected a stream of fairy lights in the back garden to add to the atmosphere of the occasion. When his fiancée-to-be returned, he had to keep her indoors.

“I was kept at the front of the house. Looking back, I should have known something was going on but I didn’t suspect a thing – I’m still in shock,” declared Laura.

Even when the fireworks launched into the evening sky around 6.20 p.m., Declan had a story ready.

“I told her that Letterkenny Golf Club had organised a display in our back garden,” he laughs.

But as the couple, not to mention the surrounding households, watched the spectacular exhibition of colourful pyrotechnics with Laura still none the wiser, Declan was nervously clutching the engagement ring and waiting for his big moment.

It came when a pre-arranged lull in the display allowed Laura to see the words ‘Will u marry me Laura’ light up the back garden.

And with that, Declan, down on bended knee, produced the ring.

“While the fireworks could be seen all over the area, that was a private moment between Laura and me.”

Daughter of Alan and Sandra Graham, Laura had no hesitation.
“After all that effort, I could only say yes!,” she smiles.