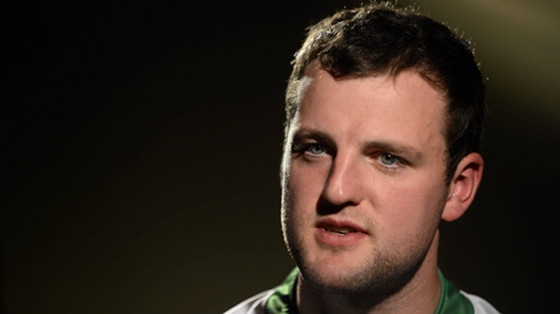 ONE year closes and another opens – but for Michael Murphy there’ll be no in-depth analysing of the journey from zero to hero made by the Donegal senior footballers in 2012.

Murphy, the team’s totemic captain, had the All-Ireland final of his dreams in September: Having smashed home a third-minute goal, he ended the game with 1-4 and was the man who raised aloft Sam Maguire, uttering the now immortal words, “We have him!” on the steps of the Hogan Stand.

The 23-year old Glenswilly man acknowledges what the capture of Sam Maguire has meant to Donegal – but cautions that Jim McGuinness’s squad remain committed to hauling further glory back to the Hills.

“It is hard to believe where we’ve come in such a short space of time, winning two Ulster championships and an All-Ireland then this year,” the Donegal captain said.

“We’ve all seen what it’s meant to Donegal people when we’ve been going around with the Cup. We’ve all watched All-Irelands in years gone by and watched other teams lifting the Cup, so it’s a nice feeling to have it sitting there with the Donegal ribbons on it.

“It’s very pleasing, of course it is, but to start looking back and analyse all of that could be a dangerous thing to do. We don’t really want to be analysing how far we have come because we’re living in the present and trying to improve all of the time.

“We will have plenty of time to look at where we’ve come from and gone to – but for now we want to keep it flowing.”

Murphy and the established names on the panel won’t return to action until the League commences in February. However, work has already begun and the skipper speaks like a man who already knows the mission that awaits.

He said: “The boys are all on programmes and now every man is keeping himself fresh and focussed – we all know that 2013 will be absolutely massive.

“In the National League the top teams in the county will be waiting for us. We’ll try to be as well prepared as we can. It’ll be a great tester for us.

“The problems we faced this year meant we were playing catch up. This year it will be no different competitively, but we’ll be trying to nail things earlier this time around.”

The May 26th Championship tussle with Tyrone is encircled in the calendars.

Karl Lacey underwent surgery on a hip injury just before Christmas, but late last week Rory Gallagher, the Donegal assistant manager, said the injury wasn’t a serious ailment, but rather was ‘an overuse injury’.

The main focus of his recovery will be getting him right for the Ulster joust with the Red Hands.

Lacey and the Donegal squad jetted off yesterday morning from Dublin airport to Dubai for their team holiday.

Players, management and backroom team members, accompanied by wives, girlfriends and children, boarded a 9am Emirates flight to the UAE city. They will be based at the 5-star Mövenpick Hotel Ibn Battuta Gate hotel, close to the Arabian Gulf Beach and will return next Tuesday, January 8th.

Six members of the 33-man All-Ireland winning squad of 2012 have been unable to travel, however. College exams have precluded Mark McHugh (Sligo IT) and Patrick McBrearty (NUI Maynooth) from going, while Frank McGlynn has stayed at home to spend time with his new baby daughter.

A delicate injury meant that Christy Toye was unable to fly, while Adrian Hanlon has also opted not to make the trip and Peter McGee is currently in Australia.

Donegal begin their McKenna Cup campaign on Wednesday-week, January 9th, when they take on Fermanagh at Brewster Park.