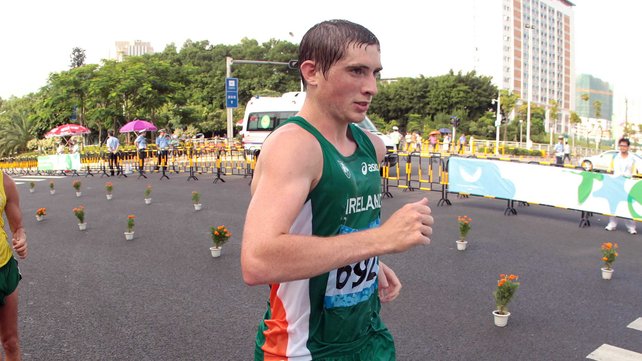 BRENDAN Boyce has recently relocated to Cork to train under the guidance of Irish race-walking legend and current standard-bearer Robert Heffernan.

The Milford man, who made his Olympic debut in London earlier this year, has swapped Leeds, where he was based for the previous four years, for Leeside.

It’s a switch the 26-year-old is hoping will help him make significant strides in the harsh world of race-walking ahead of another huge year in 2013.

Boyce marked his Olympic bow with a courageous performance that saw him take almost three minutes off his personal best in the gruelling 50k walk.

His time of 3:55:01 earned him a 29th place finish and earlier this month he was named Senior Athlete of the Year at the Ulster Athletics Awards in Monaghan.

It was reassuring to know the punishment he put his body through – in a sport that certainly doesn’t hog the limelight – had garnered him recognition among his athletic peers.

“2012 was a hard year,” says Boyce. “I had to work harder than most as I had to get my spot on the Olympic team with having to do the ‘A’ standard twice and then wait it out to see if more than 3 athletes got the standard.

“I also found out that I was anaemic about a month before racing in London, which put some doubts in my mind about the race.

“But I managed to pull on all the hard training and knowing that I prepared for this race for 3 years, which gave me the confidence to step onto the start line and get a result that I deserved.”

His performance in London answered so many questions in terms of how he viewed his involvement in the sport in the years to come.

Having only raced in his first 50k in 2010, it was hard to measure just how well he would do when placed alongside the best the sport has to offer in the most prestigious of environments.

But his measured display in such unforgiving temperatures has filled him with the confidence that he belongs among such esteemed company.

However, he is not content at merely just qualifying for major tournaments anymore and hopes training alongside Heffernan, who finished 4th in London, will add a new dimension of competitiveness to his approach.

“The race in London has just acted as a catalyst for a new approach to competition. Up until now my training was all about going into races to get qualifying standards but now that I’ve achieved that goal I have to change my mind-set to winning,” he said.

“That’s why I’ve made the change from Leeds to Cork. Robert Heffernan has agreed to take charge of my training and I’m now based down there and train with him every day.

“My short-term goal will be to take in a few shorter races in the new year – 3k and 5k races – and then working on getting my 20k time down and hopefully get a qualifying standard over the shorter distance. I need to increase my base speed and anaerobic resistance over shorter distances, which should ultimately lead to improvements over the 50km distance.”

Boyce, a member of Letterkenny AC, admits the idea of having already competed at the Olympics is a constant source of inner inspiration when training during these cold winter months.

He added: “I still haven’t come to terms with competing at the Games. It was a lifelong ambition but behind that was a desire to become the best athlete I can be and I haven’t come close to that yet.

“What it has done is stripped away all the myths about getting to this point. There is no hiding place anymore and that’s what motivates me now. Getting set into a new system helps get over any Olympic hangover and get into a new mind-set.”

Boyce’s training over the past 6 weeks has gradually intensified to the point where he is now doing over 150k a week. He recently made a return to a region in southern Spain where he spent several weeks in the lead up to London taking in some warm weather and high altitude training.
However, a mix-up in his flight booking led to him staying on for a prolonged visit.

“I went out to Spain for a 5,000m race in Guadix on the 8th December,” he said. “I had been out of training for a few days with a cold and cough but I still managed to walk 21:09, which is only just over a minute off my best. But when I got to the airport on the Monday I was told I wasn’t on the flight.

“I had booked to come back on the Monday after and I couldn’t afford to pay the extra to get the flight then so I just went down the road and found some cheap accommodation and cracked on with the weeks training in lovely weather. It was actually a good way to kick a cold.”

The two main events for Boyce and Heffernan next year include The European Cup of Race-walking in Slovakia in May and the IAAF World Championships in Moscow in August, while the National Indoors in Belfast in February will also be an important meet.

Boyce added: “2013 should be a year of transition with a change of focus to being competitive. With Rob the whole year is planned; already we have a training camp booked for the Canaries in January, as well as all the races and all other training camps.

“The overall focus is to peak for the European Cup in May for 20km and for the World Championships over 50km in August. There is only 3 days between the 20km and 50km at the Worlds so that will put most people off trying to attempt any doubling up.”