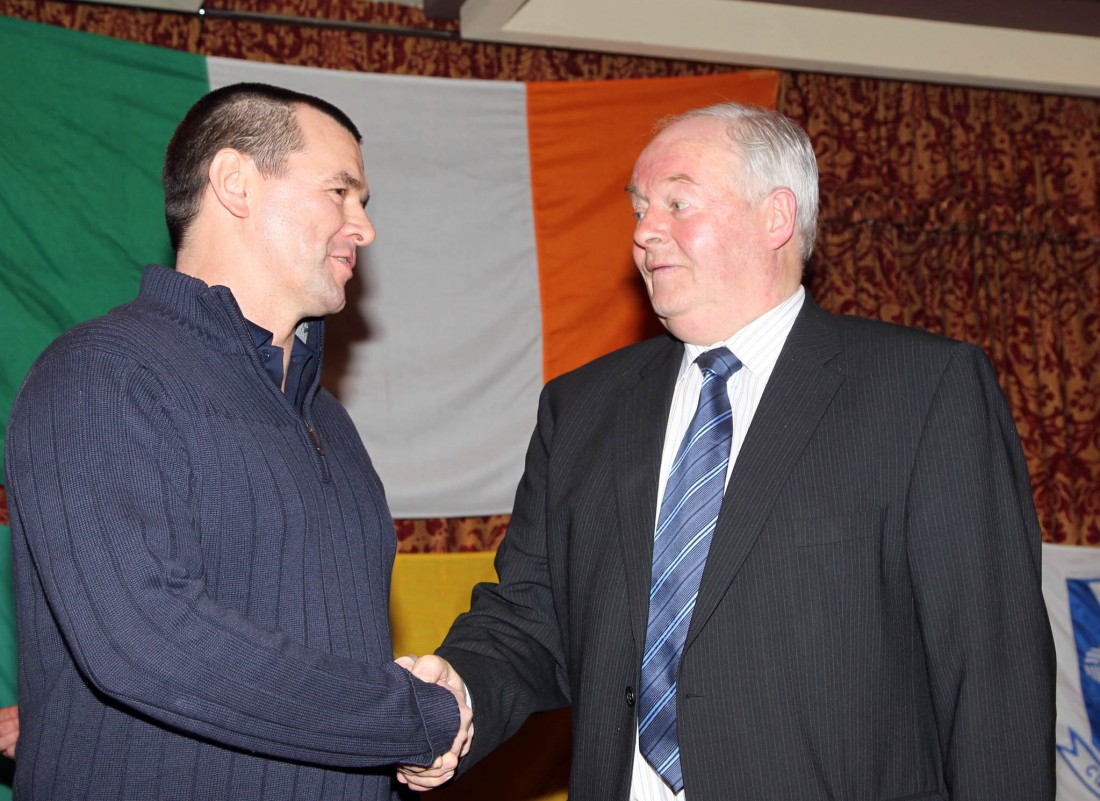 The new Chairman of the Donegal Co Board, Sean Dunnion (left), is congratulated by outgoing Chairman PJ McGowan.

SEAN Dunnion, the new Chairman of the Donegal Co Board, says that the Association in the county must present a united stand on all fronts in 2013.

Dunnion was elected as PJ McGowan’s successor for the county’s top Gaelic Games role on Sunday in the Abbey Hotel, in his native Donegal town.

Although just feeling his way into the position for the last few days, Dunnion has vowed that his leadership of the GAA in Donegal will be ‘hands on’ in a bid for the executive to stand as one during what he believes will be a challenging year in their offices.

“You really need to be versed with what’s happening,” Dunnion told the Donegal News yesterday, “I will be very hands on.

“I’ll be saying to my fellow officers that I want to work closely with them all.

“That is the only way that you can move forward. We need to make the big decisions collectively.  They need to be well-thought out and we need then to stand by it as a group.

“It has to be a team. All of the people at the top table are in the public eye, they’re put there by the clubs and people expect them to lead on their behalf. I have no doubt there will be things that won’t please some people, but it has to be a team effort.

“Gaelic Games is on the up in Donegal – and we have to continue to drive it forward.”

In a wide-ranging interview, the Donegal County Council employee – who won a three-way race for the Chair with Mick McGrath and Charlie Cannon to land the top post – has spoken about his aims for the year ahead.

And club fixtures will be to the fore when the county committee sits in January.

“Everyone has been taking things on board and are striving to make things better,” he said.

“Maybe we can improve the lot of the club player, but I would be very weary of condensing the club players’ season too much. That’s grand, you play games week after week, you get 16 League games played and you go out of the Championship in July or August – what happens from then until March?

“You’re trying to provide 19 or 20 competitive games in a 32-33 week period, that’s not a long season. I think from the end of March until the end of October isn’t a particularly tasking season. I don’t see the merits of a very short season.

“It’s about finding a balance – hopefully we can do that.”

Dunnion expects to meet Jim McGuinness, the Donegal senior football manager, before they head off to Dubai next week.

He said: “I expect to be talking to him before they head off on holiday. I’m looking forward to getting a sit down with Jim. When they come back it’s straight into McKenna Cup, but we’ll sit down and talk about things.”