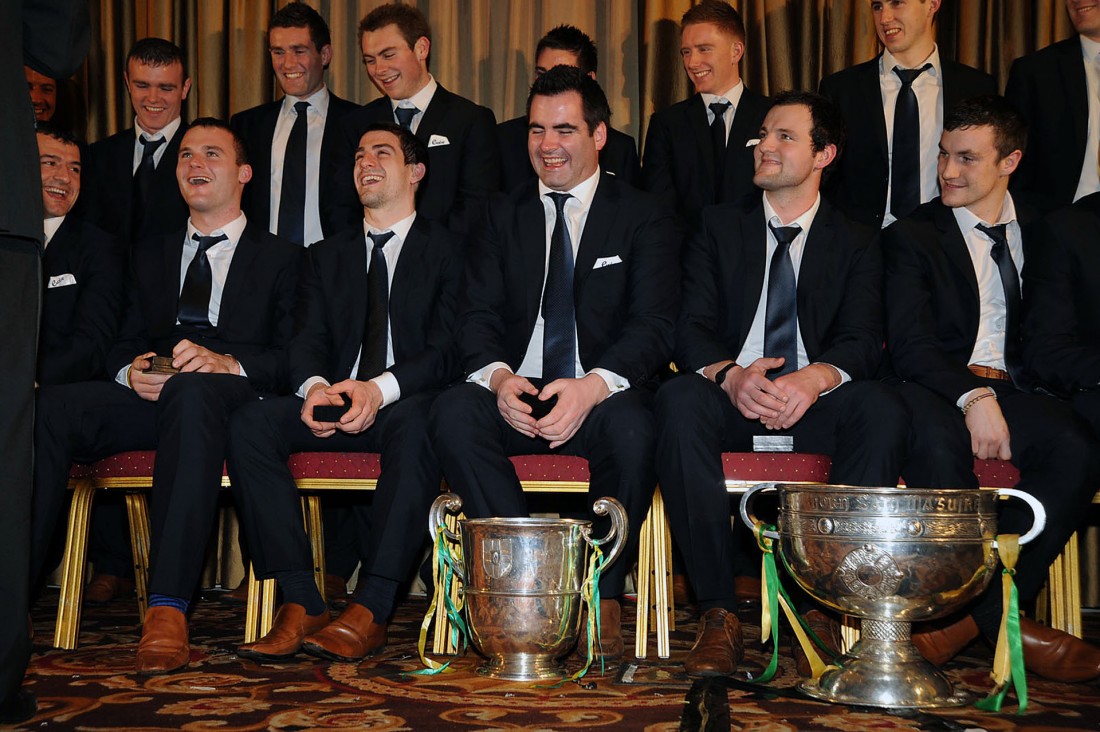 Happy men, or what? The Donegal lads have a good laugh, as they enjoy the moment after getting their medals at the Donegal GAA Awards night in the Mount Errigal Hotel.

BY CHRIS MCNULTY AT THE MOUNT ERRIGAL HOTEL

AS HE stood in front of a group of men he assembled last winter and who bore out their greatest dream in September, Jim McGuinness hailed his All-Ireland winning squad at the annual Donegal GAA banquet on Saturday night.

McGuinness led Donegal to the Sam Maguire with that never-to-be-forgotten win over Mayo in Croke Park. On Saturday night, the players were presented with a cherished Celtic Cross.

The President of the Ulster Council, Mr Aogán Ó Fearghail, presented the players with their Ulster Championship-winning medals and those All-Ireland medals.

2013 looms ever closer, though, and there was no doubting that McGuinness and Rory Gallagher have already been plotting hard on the path down which they will trod from January.

As holders of Sam Maguire, Donegal are now ‘the team to beat’ – but the suggestion his team will be the one in the crosshair of the rest of the country’s missiles in 2013 draws a shrug of the Glenties man’s shoulders.

“Completely irrelevant,” he told Saturday night’s Master of Ceremonies, Charlie Collins, and the 660 guests who packed into the Glenveagh Suite of the Mount Errigal Hotel, which hosted the historic banquet.

“We know we’re not the finished article, but we’re trying to make ourselves better every single night in training.

“We want to make ourselves better, faster, stronger, more efficient with the ball, retain our defensive shape and drive the thing forward. That is where the challenge lies for this team. The boys have never shirked that challenge in two years.”

McGuinness said that his team had ‘the right mentality to win the medal’ this year  – and the Donegal boss paid tribute to the group of men who have brough Sam back into the Hills, 20 years after McGuinness and the class of 1992 took the silvered chalice on its maiden voyage to Donegal.

He said: “It’s a brilliant night. I remember sitting down there 20 years ago, not knowing a lot about anything.

“To see the boys coming up here tonight and looking at them looking at their medals is a very special moment; it is what it’s all about.

“No one knows what these fellas have gone through to get that medal – and that is why they have that medal.

“I’m just delighted that they’re all bound by this tonight and no one can ever take anything away from them.

“When you see people who are genuinely salt of the earth who work really hard, stay focussed when people are criticising or questioning them, who continue to work hard and who get what they deserve, is an unbelievable feeling.”

McGuinness went as far as to say that, in compairson, the job of the management was ‘insignificant’.

He said: “A lot is made of management and coaching, but our job is insignificant when you think of the job the boys have to do. There is a lot of planning to do in our job, but physically these fellas are at the coalface Tuesday-Thursday-Saturday-Sunday the whole way through the season.”

Michael Murphy, the man who captained Donegal to the All-Ireland title, said that the journey they’ve made boils down to one simple word – something that was distinctly absent when McGuinness took over.

“When Jim came into us with the under 21s it took us a while to get used to methods and the way things were going.

“What we do is to try and put pride into the jersey and into the people of Donegal.”